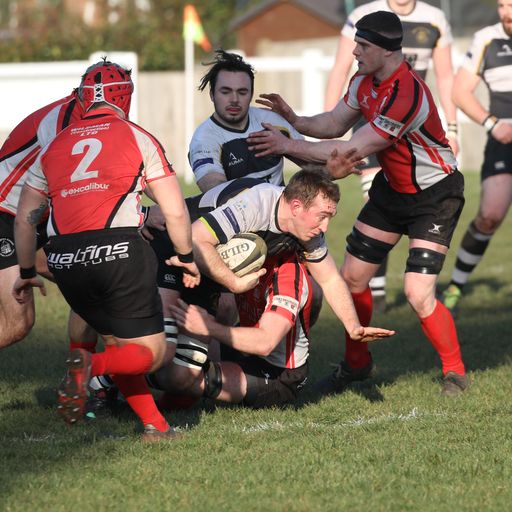 Sutton & Epsom RFC 5 – Royal Wootton Bassett 26. 21st January. Sutton & Epsom had travelled to Wiltshire in October to take on the winless Royal Wootton Bassett and returned to Surrey with their tails between their legs having lost 31-29. So the return fixture at Rugby Lane saw the bottom two clubs, with only two wins each this season, desperately slugging it out to grasp a lifeline to stay in Regional 1 South Central. For both clubs every match is of critical importance in their fight to retain their status but the coaches, players and supporters would have eyed this fixture as one to win. At the full-time whistle it was RWB who were triumphant in the relegation battle winning 26-5.

Rugby Lane was bathed in sunshine on an afternoon where the hard ground had claimed half of
the league fixtures that afternoon. S&E gave a debut to Alex Mawdsley in the centre and Lawrence
Elliott and Jack Howes, who were replacements against London Welsh, started. Jamie Flatley’s kick
off was plucked from the sky by the S&E pack and Sutton were immediately on the attack. A
penalty was kicked into the corner and Josh Glanville gathered the line out and was stopped a
metre short. The forwards inched their way under the posts before it was spun wide to Robbie
Martey to nip over in the corner. Though Freddy Bunting’s conversion slid by it was an ideal start
for the Black & Whites who led 5-0.

The Wiltshire All Blacks response was instantaneous. They matched S&E by regaining the restart
and also winning a penalty with the only difference being they went for the quick tap. Scrambling
defence denied the initial surge before the ball was delivered to the opposite touch where flanker
Scott Parry crossed untouched. Rhys Floyd added the extras for the visitors to take a 7-5 lead.
Royal Wootton Bassett pressed hard to extend their advantage and endured a series of near
misses as they failed to exploit an overlap and were also held up over the line. It was one-way
traffic and deservedly at the end of the first quarter flanker Ollie Baycroft scored for RWB. Rhys
Floyd missed the conversion but his team were well worth their 12-5 lead.

Sutton were struggling to gain any fluency despite the upper hand in the set scrum and a fully
functioning line out. The hosts’ best opportunity to level the scores came on the half hour with
some exquisite footwork from Jamie Flatley. The diminutive 10 jinked his way from halfway to five
metres from the posts but his pass was knocked on under the pressure of the scrambling defence.
For the remainder of the first half the Black & Whites were the architects of their own misfortune
as they tried to attack from their own 22 and conceded possession. However, despite the visitors
dominating territory and possession they had to be satisfied with the 12-5 interval score.

RWB opened the second period by kicking a penalty to the hosts’ 5-metre line. Sutton stole the
line out but an inadequate clearance was returned with menace only for the alert Kyren Ghumra to
secure the loose ball. The Black & Whites were struggling to find any sustained pressure as their
opponents continued to search for a third try. The Wiltshire 10 entered flamboyant mode. First
Rhys Floyd chipped over the top and re-gathered the ball in the 22 but was enveloped by the
cover. Then a cross-field kick was added to his expanding repertoire. With Wiltshire winger
favourite to score a cruel bounce denied the visitors.

Sutton & Epsom were clinging on by their fingernails but 15 minutes into the second period the
pressure finally told. A sweeping attack was halted 10 metres short but a perfectly timed and
angled run from the outstanding Number 8 Gavin Ougan saw him score. Rhys Floyd impressively
converted from the flank for a 19-5 score-line. At this stage the Sutton resistance was being led by
bullocking runs from Stefan Cooksammy who had replaced an injured Robbie Martey in the first
period but there was very little fluency in the S&E game. Then at the start of the final quarter the
Black & Whites arose from their slumber. Their best play saw Kyren Ghumra denied in the corner
by a fine cover tackle. Then from a 22-metre line out the Surrey men attacked the left hand corner before switching to the wide-open spaces on the right. A try looked a certainty before an unforgiving pass left a brace of backs staring at the undefended line.

With the chance for a grandstand finish and memorable comeback fading by the minute it was
Gavin Ougan that steadied the nerves of the Wiltshire All Blacks. Whether picking the ball up from
the base of the scrum or receiving the ball in open play he rampaged forward clocking up the
yardage to put Sutton on the back foot. With ten minutes left remaining RWB secured their fourth
try and the bonus point that their superiority on the day warranted. Attacking from a line out on
the S&E 22 they won a penalty 5 metres from the line. A couple of phases later winger Jamie
Murray was over in the corner. Rhys Floyd made light of the angle to bisect the uprights for 26-5.
The hosts were left playing for pride as they sought out a consolation score or two. A beautifully
weighted kick from Jamie Flatley from 40 metres initiated a curious moment. The RWB cover
gathered the ball near his line and passed it to an S&E player who immediately passed it to back
to another RWB man, it was becoming one of those afternoons for Sutton. From a 5-metre scrum
the retreating Wiltshire pack conceded a penalty. The Black & Whites spread themselves wide and
from the tap penalty were held up over the line. The hosts returned the drop out from under the
posts and nearly scored in one corner before switching directions. Jamie Flatley was in a promising
position threatening a score but lost his footing and a grateful defence swallowed him up. The
referee then ended the contest with Royal Wootton Bassett victors to the tune of 26-5.

With this result for Sutton the thought of relegation has shifted from possibility to probability with
this crucial defeat to the side that sit at the foot of the table. In contrast RWB will be not studying
the ‘3 Rs’ but the ‘4 Bs’ as they have fixtures against Bracknell, Banbury, Brighton and
Bournemouth as the plot their route to survival. The visitors thoroughly warranted their success
and will hope to maintain their momentum they have gained since the prolonged festive break. In
contrast the Black & Whites remaining fixtures are predominantly against those teams in the upper
echelons.

Next Saturday S&E will be visiting new territory when travelling to Horspath to play against the
Oxford Harlequins. In the reverse fixture the Rugby Lane crowd saw a thrilling contest that the
Oxfordshire side edged by 22-19.