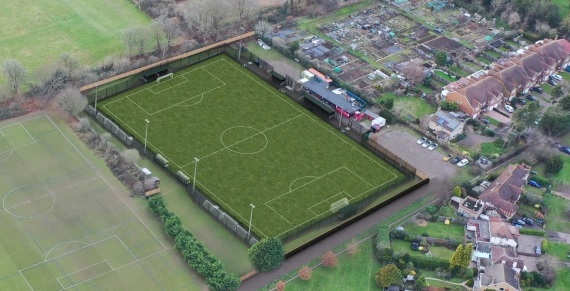 Cobham Football Club will get major upgrades to attract more women into football after councillors gave the green light following support from Premier League giant Chelsea. Several other organisations showed support for plans, which include a new spectator stand and new floodlights, saying the club helps support those with disabilities and could help in bringing more women and girls to the game.

Councillors said the football club was an asset to the community in an area where a lot of facilities were privately owned, voting for the changes with only the meeting chair abstaining. A meeting of Elmbridge Borough Council’s planning committee approved the application from the club, which was brought to the meeting on Tuesday (October 18) for a decision because the land is owned by the authority.

Support for the new 3G artificial pitch came from Chelsea FC, in a letter which highlighted the Premier League club having worked in the area for many years and said it would like “first refusal” on possible future community projects. These were listed as possibly including supporting the growth of women’s football and running a development centre for 7- to 15-year-old girls as well as supporting grass roots clubs looking to get girls into competitive football.

Chelsea’s Cobham Training Centre is in nearby Stoke d’Abernon and many former players including Frank Lampard, John Terry, Petr Cech, and Eden Hazard have lived in the area.

As well as this there was support for the application from Surrey FA, Surrey Soccer Schools, Cobham Link, a day service for adults with learning disabilities and autism, and Leatherhead Primary Care Network, representing a group of GP practices in the area.

Councillor Alistair Mann (Conservative, Cobham and Downside) said he hoped the committee would get behind the application because the club was there to promote “sport for all, football for all”. He said: “The outstanding feature of Cobham Football Club is its community basis. It’s there for the community.”

Concerns raised around the application included the loss of Cypress trees at the club’s eastern edge, to be replaced with holly hedges, as well as the noise impact on neighbours of the facility. Councillor Laurence Wells (Liberal Democrat, Cobham and Downside) said the installation of an artificial pitch would mean more playing time available, important in making sure sport was accessible to all and particularly in an area with a lot of private facilities. He said he thought conditions on the application regarding light and noise would deal with issues as best as they could but added: “Whether a noise management plan can effectively deal with swearing at 10 o’clock at night, we will wait and see but I think it’s covered off as best as possible.” He called for the pitch to be recycled at the end of its ten-year lifespan, saying it was equivalent to 1.5million plastic bags.
ENDS