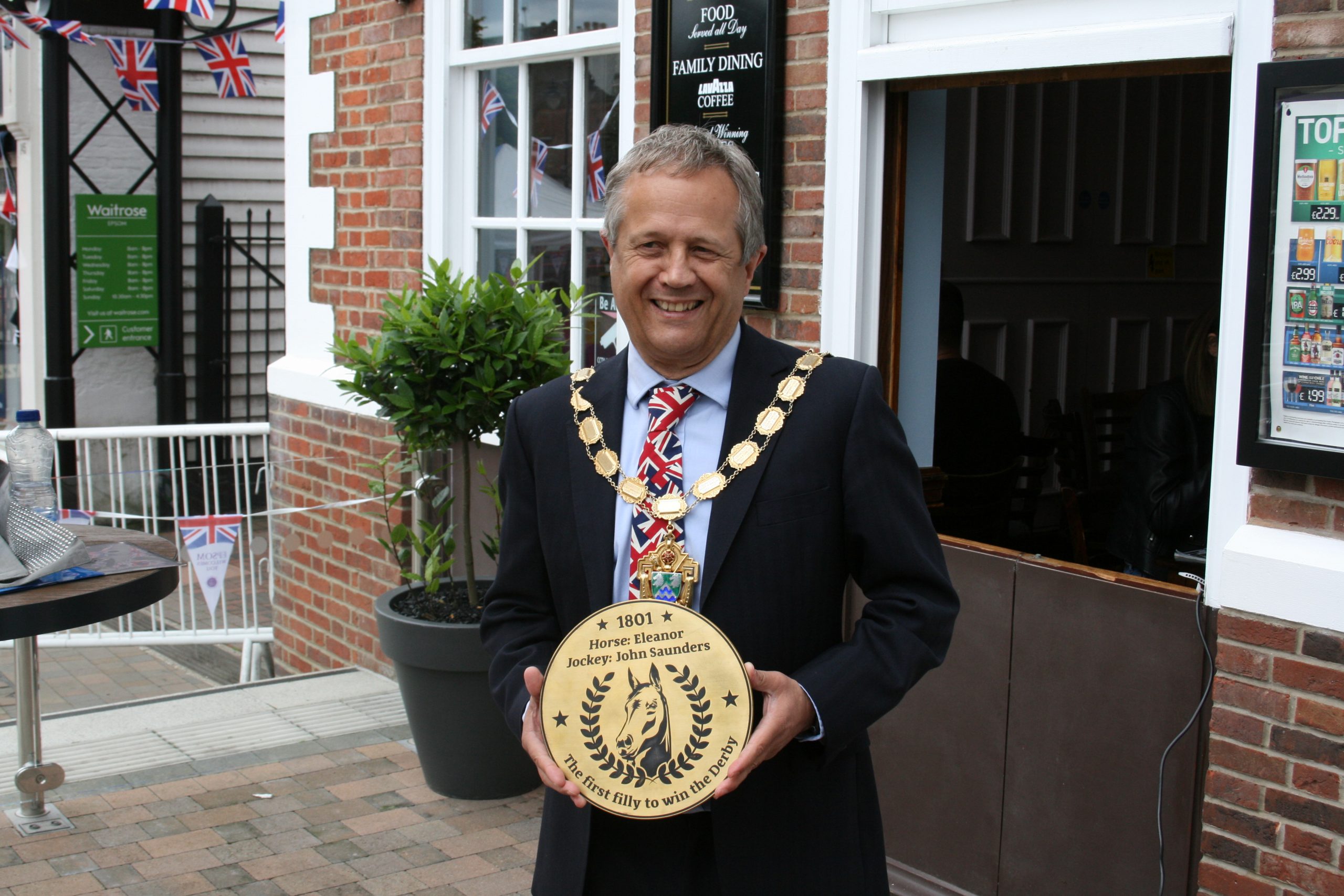 Today, Epsom’s very own racing Hall of Fame was unveiled by Mayor Clive Woodbridge alongside representatives from The Jockey Club.

Starting off the Queens’ Platinum Jubilee celebrations and the Derby weekend in Epsom and Ewell, the unique Derby Hall of Fame was officially launched on Wednesday 1 June in front of an appreciative crowd enjoying the activity and attractions of the refurbished Epsom Market Place.

The Hall of Fame comprises a series of commemorative roundels, celebrating notable and record-breaking Derby winners: jockeys, horses, and trainers. The roundels are installed into the floor on Epsom Market Place, following the line of trees, beginning at the Evocation of Speed statue, and working in date order towards the Clock Tower.

This Hall of Fame is a unique landmark that recognises the borough’s long-standing connection with the Derby, one of the most famous flat races in the world and celebrates Epsom and Ewell’s rich culture and heritage.

Commemorated here are some of the most famous and recognisable names in horse racing history – including Alex Greaves, the first female jockey to compete in the Derby; Geoff Lewis, the first Epsom-based winner, as well as the legendary jockey, the late Lester Piggott who features in two plaques – as youngest winner of the Derby and as the winning rider on Nijinsky, plus many more.

The roundels have been produced by Richard Wolfströme, an award-winning creative with over 34 years’ experience, who specialises in holistic wayfinding and cultural placemaking that explores and develops unique design solutions for places, buildings, parks, and landscapes.

Together, they will sit alongside notable artworks such as The Evocation of Speed and the new Emily Davison Statue, which capture the richness and historical significance of the borough.

The informative trail was opened by the Epsom & Ewell Borough Council New Mayor, Councillor Clive Woodbridge and included appreciative clapping in memory of the late Lester Piggott. The installation of the Derby Hall of Fame marks the culmination of a significant regeneration project for Epsom and Ewell, funded as part of The Market Place Project by Epsom & Ewell Borough Council and Surrey County Council.

The Hall of Fame will continue to be added to over time, as more significant racing landmarks are reached and will provide a fascinating information trail in the heart of Epsom Market Place.

GALLERY: Each and every roundel