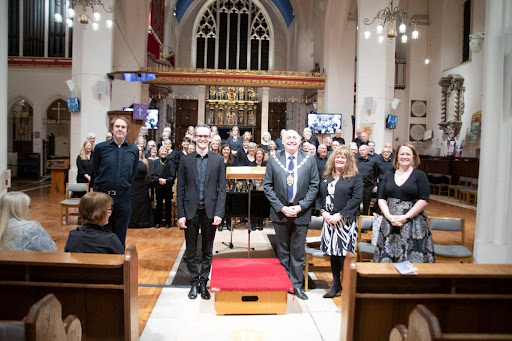 This year Epsom Choral Society celebrates its Centenary and is doing so in style!

Our first concert was on Saturday 19th March 2022 at St Martin’s Church, Epsom attended by The Mayor, Peter Donovan and his wife. For this concert, the audience was treated to Vivaldi’s Gloria, one of the most popular pieces from the Italian Baroque era, as well as three works which were all written for Epsom Choral Society – Cecilia McDowall’s I Know That My Redeemer Liveth, Jonathan Willcocks’ O Joyful Soul and Adrian Payne’s I Hid My Love.

Epsom Choral Society with Mayor Peter Donovan and his wife

Our other concerts in this Centenary year include Songs from the Shows in St Andrews Church, Cheam on 25th June 2022, Messiah at the Epsom Playhouse on Saturday 3rd December 2022 and our ever-popular Christmas Concert on Saturday 17th December.

Epsom Choral Society is Epsom’s longest established choir and has continued to sing throughout the pandemic. At first via Zoom, then rehearsing outside in a garden and even, thanks to the kindness of the Epsom & Ewell Borough Council, live-streaming a concert in a car park which was heard by over 5,000 local residents thanks to What’s On In My Town.