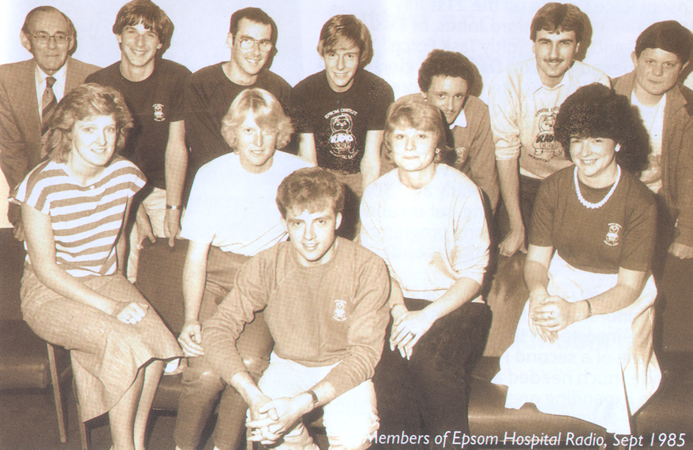 Epsom’s hidden radio gem, Epsom Hospital Radio, is looking forward to a new future online. EHR was founded in October 1978 by two mobile DJs who raised funds to equip a second hand 10 feet by 6 feet garden shed with some crude broadcasting equipment. The studio was placed in an exposed area on the roof of the then Epsom General Hospital. In the depths of winter, it was a hostile working environment with presenters regularly broadcasting in heavy coats, hats, scarves and gloves on colder days.

Life President Presenter Trevor Leonard is EHR’s longest-serving presenter. Starting in 1981, Trevor became the Programme Controller in 1983, overseeing EHR’s first awards for the standard and variety of its programming. An ardent Elvis fan, in August 2021 Trevor celebrated 40 years of continuous service by hosting a breakfast for current presenters at The Haywain pub, Epsom.

Today the station broadcasts 24 hours a day, every day of the year, staffed by a team of volunteer presenters, from two studios opposite the X-Ray Department. Says station manager, Ian Daggett: “We are here to keep you amused, entertained and informed during your stay. You can find us on the radio section of your Hospedia terminal – and all our services are completely free!

Our programmes carry regular information about the wide variety of services available to you during your stay in Epsom Hospital. We also provide the latest local, national and international news, plus sports coverage and a wide variety of music styles and genres.

We play familiar songs and favourite artists across six decades from the 50s to the 2000s – and in addition, we have regular specialist programmes covering classical, jazz, drama, comedy, interviews with hospital staff and local community groups and personalities, and more.”

Dr Abhay Bajpai, clinical lead for Arrhythmia Services and Kathy Maskens, community matron for the Alexandra Frailty Unit, regularly feature on the station. Dr Bajpai visited EHR’s studios pre-Covid and was featured in an EHR Test Match Special in an interview recorded at local pub The Jolly Cooper’s where Abhay waxed lyrical on his love of the red ball game.

Kathy Maskens is the inspiration behind The A team, a Friday afternoon 2-4pm patients and staff requests show on EHR. Ed Sheeran’s The A Team and theme from 80s US TV show The A team double as musical themes for the show. Kathy has featured in an EHR 8GR8 Songs episode with an interview about her career as a nurse and some of her favourite music.

Marie Measures, head of Nursing for Medicine at Epsom and St Helier University Hospital NHS Trust, used the station to send a message of thanks for the resilience of her nursing team during Covid. “Thank you to all of Medicine’s matrons and to their teams for continuous hard work and dedication in very challenging times.” Marie appropriately asked for Billy Ocean’s When the Going Gets Tough, the Tough Get Going to be played on the station as a musical tribute to her team.

Having weathered the impact of Covid on the station – halting in studio broadcasting for over a year, ward visits to gather requests still on hold, the loss of a number of presenters coupled with the financial impact on a shoestring budget – the station is now looking to a new online future.

EHR is looking for a new crop of talented presenters to add to its roster of live in studio broadcasters. The station is also fundraising to assemble the equipment and licenses needed to reach a broader audience in Epsom and Ewell, and beyond, outside the walls of the hospital.

Says Ian Daggett: “In our 40 years of broadcasting there has never been a greater need for a dynamic local hospital radio station. Going online will help us to bring light relief and a sense of community to the hard-pressed staff at Epsom Hospital and to the people of Epsom and Ewell when they, or their loved ones and family or friends, are in hospital.”

You can donate to the station’s Going Online Fund, or generally support EHR’s activities via: www.epsomhospitalradio.org.uk/donate.