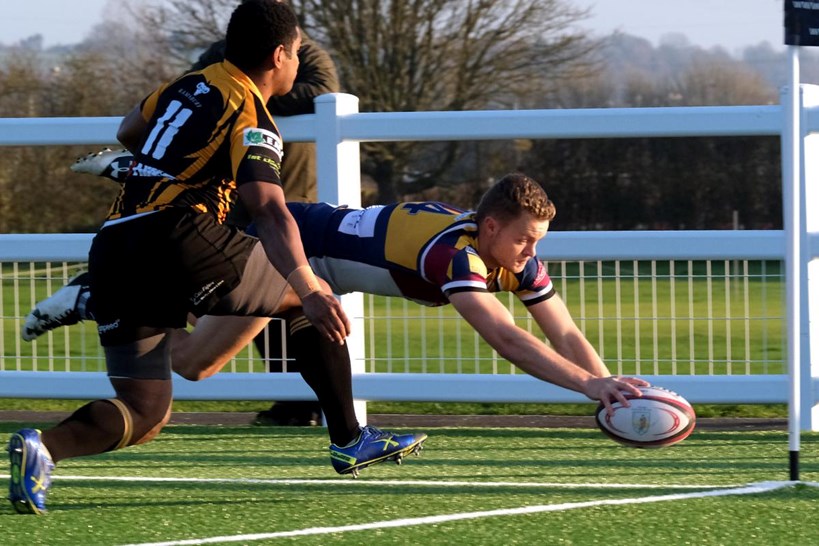 SUTTON & EPSOM 19 OXFORD HARLEQUINS 22 – Sunday 30th October – With the clocks going back in the morning it was the last of the 3pm kick offs before the seasonal variations and Rugby Lane welcomed another new opponent, Oxford Harlequins. At the end of Round 5 the Oxonians were the league leaders having thumped the previously indomitable top dogs of Maidenhead but a duo of defeats in the last two weeks have left them in fourth place. Meanwhile the Black & Whites have attracted the label of ‘Close But No Cigar’ with a trio of narrow defeats and a draw leaving them in the drop zone. It appeared to be a question of whether the visitors could get their season back on track or whether the hosts could finally see out a close encounter of the frustrating kind. For the home supporters it was unfortunately the former as the visitors hung on to record a 22-19 victory.

It was selectorial swings and roundabouts for S&E as they welcomed back their influential ten, Gareth O’Brien, and gave a debut to Joe Reid but lost impressive centre Archie Fitzgerald to injury. The visitors initiated proceedings on a sunny and mild autumnal afternoon with S&E favoured by the breeze. From the outset the game was played at a furious pace. James Caddy gathered the kick off and countered with Tom Brooker and George Drye to the fore before a booming clearance from Gareth O’Brien sent the opposition scurrying back deep in their 22. The Quins won the ensuing line out and ran the ball hither and thither before being awarded a scrum 30 metres from the Sutton line. Excellent passing and rapid recycling overcame staunch Sutton defence as Andrew Jarvis touched down in the corner despite the tackle of Michael Davies. Ethan Fox failed with the challenging conversion but Oxford Harlequins led 5-0.

Hardly had the Rugby Lane crowd had time to digest another early and unpalatable offering when lightning struck twice and Andrew Jarvis repeated the dose in the far right corner. A scything line break and slick passing saw full back Jack Antoniou marauding towards the line only to be dragged down 5 short by a tremendous tackle by Freddy Bunting. However, support was on hand and with a superb Ethan Fox touchline conversation the visitors were 12 up in ten pulsating minutes. The tenor of the game was then illustrated by two penalties awarded. Firstly, the Oxonians declined a simple kick in front of the posts and then S&E attempted one from near halfway. Neither side garnered points and at this stage it seemed unlikely that OH would rue the gift of three points. In contrast from the Sutton miss Tom Brooker caught the drop out and returned the ball with interest deep into the 22. The ball went right and prop Will Lloyd, standing in at stand off, supplied an exquisite pass for Tom Boaden to power over. Freddy Bunting added the extras as Sutton trailed 7-12.

The Horspath Sports Ground men responded to the effrontery of the Sutton score and returned to the Black & White 22. The hosts conceded a penalty as a defender lay prone by the ruck, the gentlemanly opponents declined the skulduggery of throwing the ball at him as is the fashion in the elite game and spun it wide. Following a few phases it was brought back for the offside any way. A tap-and-go penalty reaped the reward and from the ruck near the line prop George Primett found the perfect line to receive the pass and score under the posts. Ethan Fox chipped conversion made it 19-7 on the half hour. With the approaching interval Sutton had to stem the tide and make an impact on the scoreboard. A bone-shaking tackle by Ben Tame on the influential 15 Jack Antoniou demonstrated Sutton’s defensive resolve. Then in the dying embers of the half O’Brien and Brooker combined to put S&E in prime position. However, the opportunity for a morale-boosting score and a shift in momentum was squandered by a technical infringement at the scrummage. The visitors proceeded to clear and Mr Rodwell blew for half time with Oxford Harlequins 19-7 to the good.

Freddy Bunting got the action underway once more as the former league leaders looked to replicate the start. Sumptuous back play with sublime offloads brought the visitors within touching distance of glory. Yet it was S&E who turned over the ball and won a relieving penalty. Prop Will Lloyd had been replaced by debutant Joe Reid, 36 years young, who was to be influential from the next scrum onwards. Sutton’s advantage at the set-piece now became complete dominance. The decimation of Reid’s first scrummage was like a shot of adrenalin in the body of the home XV as confidence coursed through their veins. Soon the crowd were on their feet as Ollie Baptiste-Wilson sprinted down the touchline in front of the Memorial Grandstand, passed inside and Freddy Bunting sauntered home only to be denied by the winger’s foot being in touch. S&E bulked up their pack as the Brobdingnagian lock Ewan McTaggart replaced Josh Glanville. As more destructive scrummaging followed the referee offered a cautionary word to the Oxfordshire pack but the inevitable yellow emerged at the next set-piece. The numerical advantage soon saw a second Sutton score. Bunting kicked to the corner, Captain Drye caught the throw and the pack remorselessly advanced over the line for Tom Boaden to score his second try. Freddy Bunting converted to trail 12-19.

In stark contrast to the first period the visitors opted to kick at goal from near halfway from a penalty awarded after the restart. Ethan Fox impressively extended the lead to 22-12. S&E made another change as Ross Parsons replaced Austin Bell at 9. But the significant change occurred when Quins’ prop George Primett was injured at the next scrum. The referee explained the intricacies of the laws and briefly uncontested scrums were on the menu. The Black & Whites took full advantage as Ollie Baptiste-Wilson replicated his touchline tightrope tap dance on the opposite flank. To the delight of the crowd he dived into the corner. Freddy Bunting converted magnificently from the touchline as OH led by 22-19. Five minutes later amid great concern from both physios Tom Brooker was forced to retire having put in a thunderous performance and Josh Glanville returned to the fray.

The closing stages were utterly compelling as the Oxford Harlequins tried to force Sutton & Epsom back into their half whilst their opponents attempted to manufacture one final chance. The status quo was maintained in the arm wrestle for supremacy until deep into time added on. Finally, Sutton had a foothold in enemy territory and advanced towards the 22 only to be halted by foul means rather than fair. The penalty was eminently kickable to those who know the burgeoning reputation of Bunting’s boot. The expectant crowd anticipated seeing the kicking tee being ferried onto the paddock but no. The hosts opted to kick for touch and go for the win. The first hurdle was overcome as they caught the throw. The forwards were now a mass of desperate bodies as the Sutton trundled forward in search of glory. Then a shrill blast of the whistle and despair for S&E and delight for OH as the visitors were awarded a final scrum. With Joe Reid off nursing an injured knee this was a far easier challenge and the ball was dutifully kicked off the park. The jubilant visitors, arms aloft, celebrated a very tough 22-19 win.

For Sutton there was much to admire. Through necessity Alex Mount was pressed into service as hooker and revelled in his new role and the line out was markedly improved. The triumvirate of Brooker, Caddy and Drye were outstanding ball-carriers in the pack. The ace up the sleeve was Joe Reid’s appearance off the bench who was a wrecking ball in the set scrum. Meanwhile Ollie Baptiste-Wilson enhanced his reputation as a lethal finisher. However, it was a superb team performance against one of the prominent teams in the league. For the visitors it was a joy to watch the almost faultless handling and creativity of their back division with one-handed offloads commonplace. In an era of ever-increasing size it was a delight to see the rather diminutive centre Toby Haines buzzing around taunting the defence like the most annoying of mosquitoes being a constant pest with jinking runs and telling passes.

Following a trio of new league opponents the Black & Whites face familiar opponents in local rivals Wimbledon next Saturday 5th November. For those of you making the annual pilgrimage to Barham Road please note the kick off will be at 2:30pm.