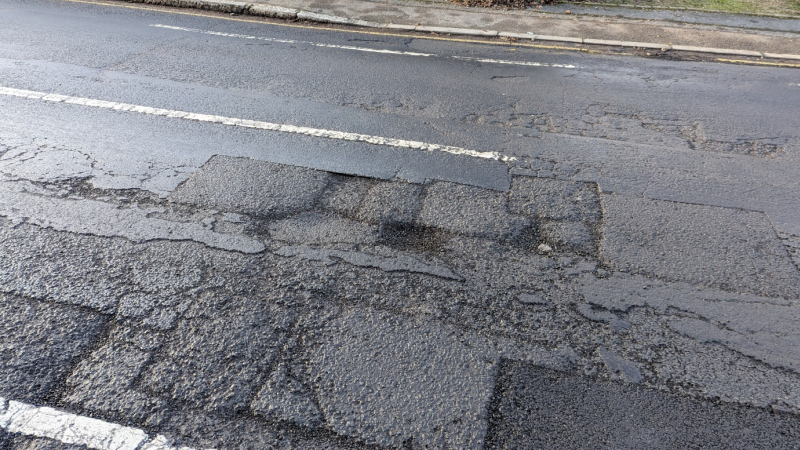 Who knew that 15th January was National Pothole Day? Earlier this month I drove around a bend in Woodcote Green Road in Epsom at night to be faced with a traffic cone placed a few feet into the road. Was that dangerous or was I lucky? The cone was placed in a large pothole and if the car had hit the pothole it might have been damaged. The Autocar website recently reported that a single pothole in Surrey had caused wheel and tyre damage to at least twelve cars on the evening of the 17th January. Whilst both the pothole that caused the damage to the 12 cars and the pothole in Woodcote Green Road were repaired by Surrey County Council, the surface on Woodcote Green Road leaves a lot to be desired and has done so for a number of years.

This incident reminded me of a report made to the Council via their porthole reporting web page in October of last year. It reported potholes and commented on the general poor state of the road surface of Woodcote Green Road that runs behind Epsom Hospital and is a route used by many cyclists. A reply was received. “We have visited the site and on closer inspection the problem does not need immediate work. We will continue to monitor and consider it when planning future works.”

Although Surrey County Council sends teams out to repair potholes they consider dangerous, the general surface of the road continues to deteriorate. On a stretch of Woodcote Green Road between Sunnybank and Pine Hill, about 450 metres long, more than 60 defects in the road surface are apparent. Some of these are no more
than 2 cm wide and 10 cm long. One varied in width from a few centimetres to about 15cms, was 17 meters long and entirely in a cycle lane. Another was about a square meter in area and had cable exposed arising from and disappearing back into the road surface. Reporting a pothole shallower than 3cms or other road surface issues
results in the message: “This issue is likely to be assessed as a low priority when inspected. We will probably wait to repair it as part of future improvement works.”

Walking along the road it’s noticeable that a number of defects are immediately adjacent to previous repairs, others are repairs that are beginning to break up and some are surfaces that have been reinstated after work by utilities and are sinking. Are the quality of repairs or reinstatements monitored and who is responsible for any
substandard work?

It is also noticeable that when a team is sent out to repair a pothole, that is exactly what they do. There may be defects very close to the pothole being repaired but these are ignored. In wet and cold weather, even small holes in the road surface will fill with water, the water freezes and expands and the hole gets bigger. Would it not make sense, and maybe save money if once a team was on site they fixed not only the hole they were sent to fix but also other defects nearby?

The wait goes on for better quality road surfaces in Epsom.

Is your road potted with potholes? Are you going potty about these potholes? Send us photos of your potted street. Epsom and Ewell Times admin@epsomandewelltimes.com