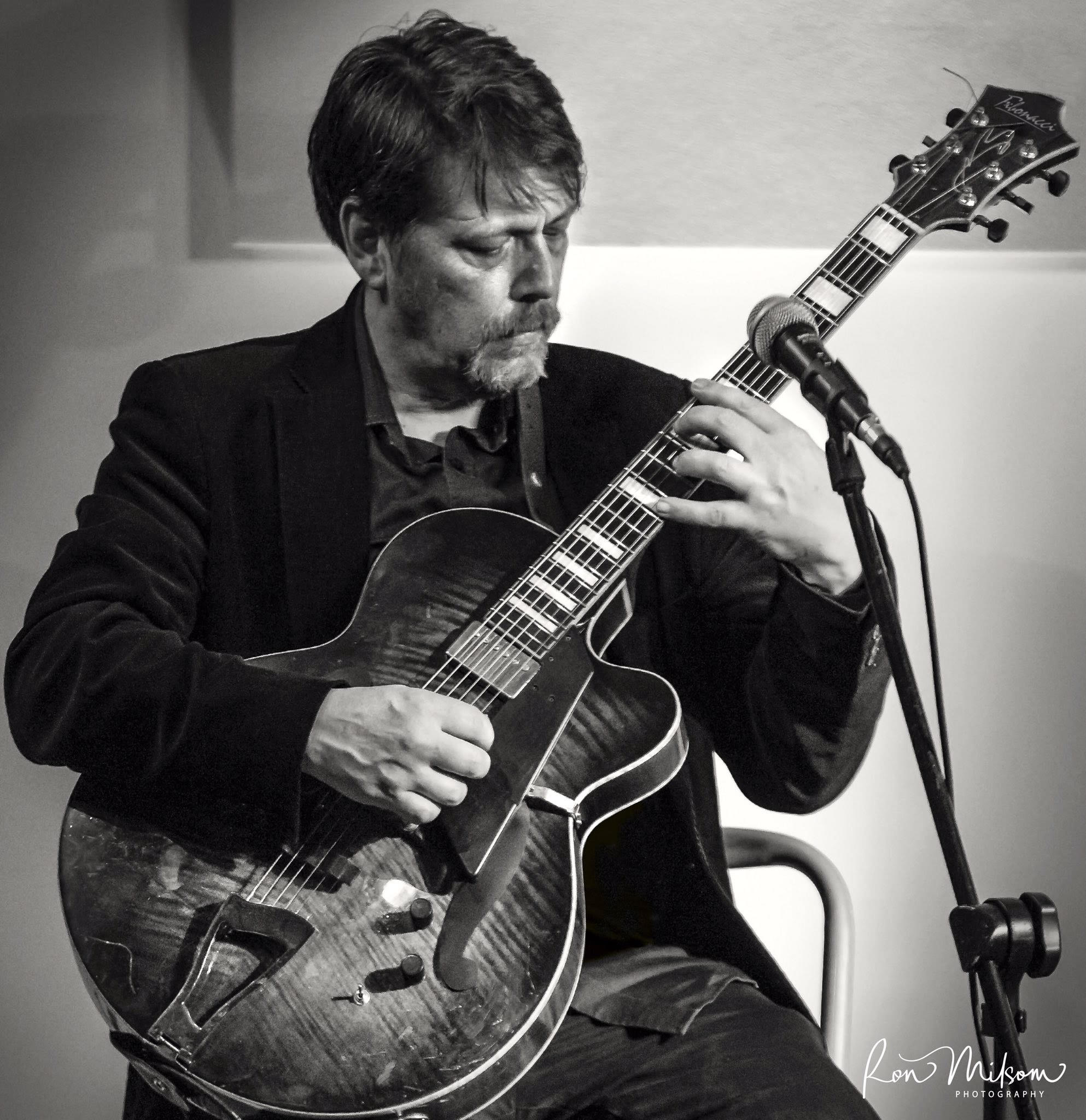 Epsom & Ewell Times have had the absolute honour of sitting down with Nigel Price. Epsom born and bred Nigel Price is an award-winning Jazz guitarist whose career has spanned over 25 years, and he kindly agreed to answer some of our questions, read on for more!

How old were you when you first picked up and played a guitar?

I was 11 years old. A bunch of us at St Martin’s school got together and decided to form a band. It was just for fun but it immediately felt right and we rehearsed regularly. Every Sunday between 2 and 6. The music was pretty awful. How much can you do with a drum kit, an air powered keyboard, a mouth organ, a guitar and a boys brigade snare drum? At 6 o’clock on the dot the drummer’s mum used to throw the door open and shout “Right. THAT’S IT!” and chuck us us all out.

Did you teach yourself or did you have years of lessons?

I am pretty much self taught. Once in a while I might have a single lesson with a player I really respect but I figured nearly everything out on my own. They say ‘the greatest encyclopaedia is your record player’.

Where and when did you first play in public?

We played at the school in 1982. Blimey. That sounds like a long time ago! There followed many gigs around Epsom. There was a really great music scene for young people back then. Linton’s Lane, The Playhouse, Nescot, Bourne Hall and other places used to put on music nights for local groups and sometimes ‘battle of the bands’ competitions. It’s such a shame that this doesn’t seem to be the case anymore. My first paid gigs were with a reggae/ska band in the early nineties. We toured around Europe, playing clubs and festivals, often supporting the legendary Jamaican band ‘The Skatalites’.

Do you play any other instruments?

No, I don’t. I was always worried that I would end up being a jack of all trades, master of none so I poured all of my practise into the guitar. I did play the bass in a funk band for a while though which was great fun.

Who have been your greatest musical inspirations and why?

As a kid, once I’d devoured all of my dad’s record collection, that was made up of classic sixties pop, Motown, a bit of Queen and everything by the Beatles, I moved on to buying my own records. I was already used to listening to music that had been made decades before so it didn’t feel unusual or wrong in any way to be listening to bands that had gone before, like Led Zeppelin. Of course, Jimmy Page (the guitarist from Led Zep) is an Epsom boy and actually used to sit next to one of my mate’s dads when he was at school. Epsom High I think. I think having the notion that it was possible to ‘make it’ really spurred me on and I was convinced I was going to be a pop star! Of course, that never really worked out but I think I’ve ultimately ended up doing something much more fulfilling through a life in jazz.

There was a natural progression to jazz via the blues that I’d heard in bands like Led Zep, AC/DC and Thin Lizzy. My elder brother was a mod and listened to a lot of proper blues too, like John Lee Hooker, Muddy Waters etc, so that was filtering through too. I eventually bought some actual jazz records and I was completely blown away by hearing Art Pepper, Miles Davis, Eddie Harris and several other horn players. I made a concerted effort to seek out jazz guitar players and it didn’t take too long to bump into Joe Pass, Wes Montgomery and George Benson. There’s a whole lot of music to listen to with just those three. I made it my business to check out as many guitarist as I possibly could. I remember thinking that perhaps it was a rabbit hole I would go down for a couple of years but I actually never made it out!

What’s the size of the biggest audience you’ve played and where was that?

It was a festival in Holland. Nijmegen I think. We played right after ‘Supergrass’. There were about 20,000 people in front of us and I was nervous as hell! There was a cameraman on stage. He ran up to me at one point while I was soloing, I remember taking my eye off the guitar, looking at the camera and then making a big howling mistake, right there on live tv! Ha ha!

Do you have any favourite jazz composers?

Not really. Although sometimes you end up playing tunes not knowing who they’re composed by and then you often find that the same names pop up. Duke Ellington is obviously the don, along with Billy Strayhorn. Some of Benny Golson’s compositions are absolutely great, as are Kurt Weill’s. Actually, there is such a huge volume of repertoire that it would be impossible to name a favourite. If you asked me the same question tomorrow I may have given you three different answers!

Who are the most famous artists you’ve played for?

I guess Van Morrison would be the most famous. Recording on his album ‘Keep me singing’ was an unforgettable experience for sure! It was an honour to back Dame Cleo Laine on her ninetieth birthday bash at Birmingham town hall too. I spend most of my time playing with figures in the jazz world which, well, let’s just say they wouldn’t be considered ‘household names’ but within our scene there are many who I personally consider to be legends! Invariably, this is where the best music happens…

How did Covid impact on your work?

I’m not sure if I can even talk about it. To lose everything for such a long time was really mentally damaging. I love to work and I love to work hard. I’ve been playing 300+ gigs a year for two decades so I was utterly lost for a while.

How are things today?

To my surprise, things bounced back very quickly and I’ve been chockablock all year so far. A bit too busy actually!

Who is your favourite classical composer?

You’ve got me. I’m not really a classical music fan and I don’t listen to it very often. Having said that, there are a lot of jazz sensibilities in Bach’s music but I’ll freely admit to never really having studied it in any great depth. Sometimes I hear something from the classical world that sounds amazing but I guess I just always find toward improvised music. I find the idea of spontaneous composition much more exciting.

You can hear Nigel Price play at the Epsom Jazz Club on 2nd June and 7th July. See www.epsomjazzclub.com