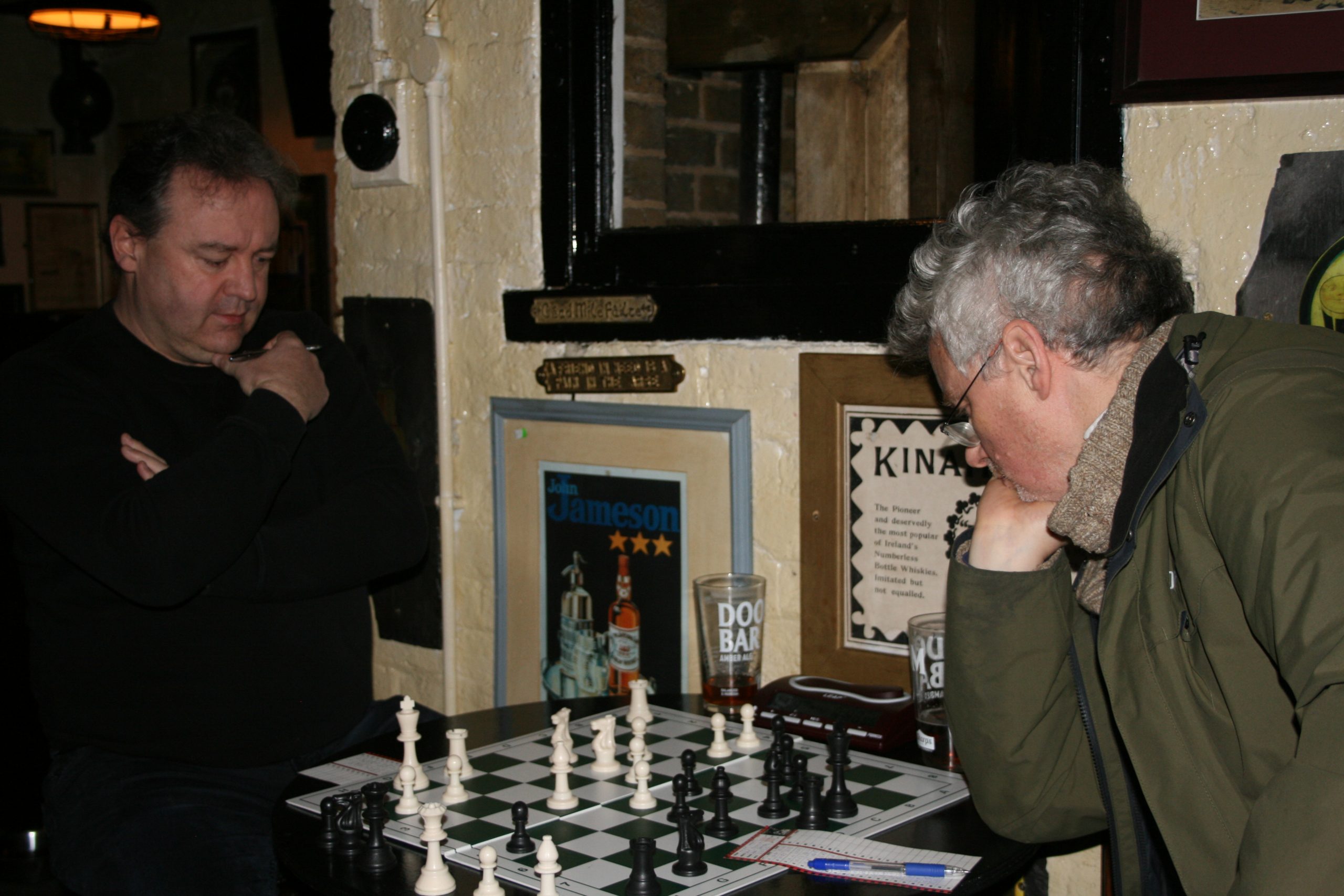 The Epsom Chess Club was launched in 2018 by Marcus Gosling and Ravi Sharma, the successor to the original Epsom Chess Club, founded in 1929. Meeting in MccAfferty’s Irish pub’s function room on Monday evenings, a large group of players sit in quiet concentration in a warm room adorned with 1940s-era metal whiskey adverts, flags and old newspaper front pages, juxtaposing the battlegrounds of white and black spread through the room.

Marcus, President of Epsom Chess Club, tells me that restarting the club was, “a Matter of local pride, really”, having lived in Epsom all his life (apart from 2 years in Russia) Marcus wanted a community based and, more importantly, community ran Chess Club the town could be proud of, “I wanted to build something from nothing.”, and he certainly has. With nearly 50 members available for games, the club is large and bursting with talent, having won their division in 2020 just before lockdown came into effect, like all of us, the club was hit just hard by COVID.

Chess is for everyone, big, small, young, not so young, plebeian or patrician, and in the Epsom Chess Club, these groups are represented well. I spoke with one member, who at 15 was the youngest present. He was in a position most kids his age dreamt of, let into a pub with no ID and no parental supervision, but instead of drinking as many pints as he could get away with, he was beating people twice his age at the world’s most sophisticated game. Matches can last minutes, hours and even seconds. In one match I counted 30 minutes before the first capture, between the cautious shifting of pawns and knights, you could almost hear the gears turning in the heads of the players. Chess can be tense, relaxed, fun and frustrating all in the space of 5 minutes, denoting how it can be so widely enjoyed by so many different people across the world.

What makes Epsom Chess Club special? Why do people keep coming back? “It’s for the love of the game”, Club Secretary David Flewellen tells me while they’re setting up their session, “It’s satisfying to come here every week and end up playing a better game”. What makes the club special is that it’s a place where you can relax with a drink and let chess consume you for a few hours, an escape from the problems of everyday life. When you’re in there, all that matters is the board, the pieces and the person sitting opposite you, with their hand placed thoughtfully under their chin, plotting your metaphorical demise. Ego’s are muted, friendly advice is given over drinks post-game and players observe each other’s games stoically, before respectfully congratulating/commiserating the winner/loser. There’s no gloating, no under or over estimation, just pure chess. In a place meant for drinking, revelry and out-of-tune sing-a-longs; a company of like minded men and women meet week-in week-out on a monochrome 8×8 square battlefield, if that isn’t enough to show that Epsom Chess Club is special, then I don’t know what is.

The atmosphere of the club is fun, friendly and familiar, with the same faces (and a couple of new ones) showing up week in week out at MccAfferty’s pub. Whether they’re playing a Blitz (speed chess) tournament or playing ranked games against each other, the love of the game is clear, as is the fact that we should all be very proud of our local chess club.

Due to unforeseen circumstances, the Epsom Chess Club are no longer able to hold their sessions in MccAfferty’s pub, and are looking for a new permanent home. The Epsom Chess Club is a fun, talented and welcoming community based club, if you or anyone you know is aware of a new venue that can host the ECC, please contact Marcus Gosling via email at marcus94gosling@gmail.com or David Flewellen at davidflewellen@gmail.com.