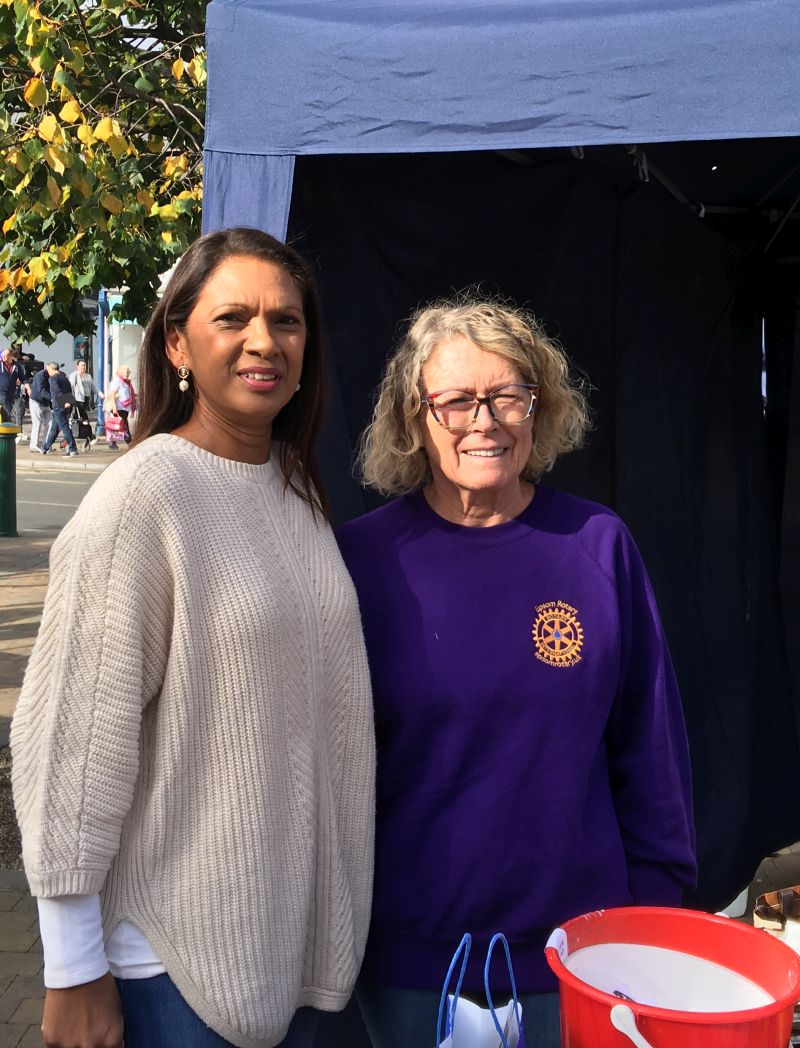 Gina Miller supported Epsom Rotary‘s fight against rising cases of Polio. Today is National Polio Day and on Saturday local Rotarians were raising awareness in Epsom’s Market Square. They raised £300 from the Borough’s generous public and that will be matched by the Bill and Melinda Gates Foundation.

With the news reporting Poliovirus has raised its ugly head, here in the UK, it is a reminder how important the Rotary International PolioPlus campaign is. Not since 1984 has there been a case of polio in the UK, which was declared polio free in 2003. Although, no cases have been detected or confirmed and the risk of someone catching polio in the UK is low, it has come as major blow to Rotary, that it has been identified, here, in the UK. The emphasis is being placed on trying to make sure that all children and unvaccinated adults have been fully immunised against the disease. This is because the poliovirus is opportunistic and will exploit gaps in population immunity.

The Rotary PolioPlus campaign was launched in 1985, becoming a founding member of the Global Polio Eradication Initiative in 1988. In this time, Rotary members, working with communities around the world, have contributed more that 2.1 billion US dollars and countless volunteer hours for the fight to end polio. Now polio is considered eliminated in most first world countries with Afghanistan and Pakistan being the only countries in the world where the infection is classed as an endemic.

The fight has to continue and as Rotarians we can play a key role in raising funds and awareness to achieve a polio-free world and ensure we protect the gains Rotary has worked so hard to achieve.

Poliovirus (Poliomyelitis) has been confirmed in non-endemic countries in Africa, Asia, Europe, India, the United Kingdom, and New York in 2022. In recent years, polio-endemic countries of Afghanistan and Pakistan have reported polio outbreaks, according to the Global Polio Eradication Initiative (GPEI).

And on September 26, 2022, the U.S. CDC issued a global Alert – Level 2, Practice Enhanced Precautions, regarding polio outbreaks and poliovirus detections in various countries.

On September 13, 2022, the WHO added the USA to a list of about thirty countries where circulating vaccine-derived poliovirus (cVDPV) has been identified in 2022.This action is related to genetic sequences in July 2022 from a polio (Acute flaccid myelitis) patient in Rockland County, NY, and wastewater specimens collected in various New York counties, linked to poliovirus samples collected in Israel, and London, indicating multi-country, community transmission.