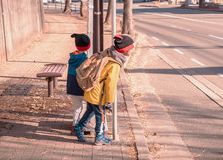 Families were pushed to using food banks and suffered an impact on their mental health when Surrey County Council-funded school transport was not provided for their children.
Surrey County Council carried out a review into the school transport “failure” after nearly 150 families, many with children with additional needs, were left without a way to get their children to school at the start of term.
Alongside the authority’s internal review, Family Voice Surrey carried out its own, including a survey which heard from 290 families about the impacts of children not being provided with transport to and from school.
The survey showed that 71 per cent of those who responded had experienced challenges with home to school transport during the autumn term and that 19 per cent of children and young people were unable to attend school or college on the first day.
Leanne Henderson, the organisation’s participation manager, said they heard from “desperate” families every year about issues with school transport, often right at the end of August, when transport had not been confirmed for the start of the school term.
She also raised concerns about the communication that came from the authority, with many families waiting a long time for contact from the council.
The approach of the council had been “very inconsistent” she told a meeting of the authority’s children, families, lifelong learning and culture select committee on Thursday (December 15).
Ms Henderson said: “We had some families that told us they had to use food banks because they were so financially disadvantaged due to not being able to transport their child to school, and that was really quite worrying.”
She also told the meeting that the organisation was “shocked” that 86 per cent of respondents said the situation had adverse effects on their mental health and well being, and increased anxiety.
More than a third of respondents reported financial issues.
She said: “They were the two elements that really hit home and made us wonder: ‘Why has this happened? What is going on?’”
The meeting heard that at least six factors had led to a backlog of cases at the start of the school year, including an increase in applications, a policy change earlier in the year and a lack of resources.
Ms Henderson said she could see council staff were “totally overwhelmed”, saying she could see from both sides in talking to the families affected and those working at the council.
She said: “I could see the team and I really felt for them.
“They were doing the absolute best that they could do under really difficult circumstances.”
The council’s report listed 50 recommendations to ensure the issues would not be repeated next year, and there were recommendations in the Family Voice Surrey report.
Councillor Clare Curran (Conservative, Bookham and Fetcham West), the authority’s cabinet member for education and learning said she had also been “swamped” by emails on the matter.
She said the review that had been carried out was a “substantial piece of work” and not a “five-minute fix”.
The council spends more than £50m a year on helping children and families get to school, which Cllr Curran told the meeting is a fifth of the entire net budget for children and families.
Cllr Curran added: “I don’t underestimate the task at hand, I don’t underestimate the work that needs to be done.
“But I’m confident that we are going to get it done and next September families, children and young people won’t suffer the failure that there was in September this year.”
ENDS