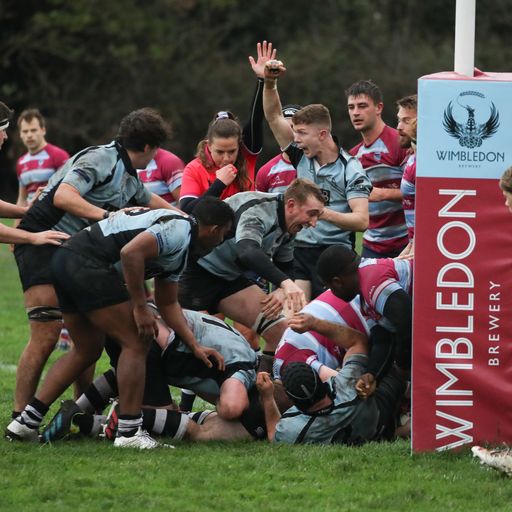 WIMBLEDON 41 – SUTTON & EPSOM 10 – 5th November. Sutton & Epsom and Wimbledon rugby is always an entertaining Derby match. Last season was a very underwhelming campaign for S& E but it had two glorious highlights with home and away triumphs over their local rivals. This season the teams could hardly be enjoying more contrasting fortunes. After an opening day loss to Camberley the Dons have swept all before them with a magnificent seven wins taking them to the top of the table. In stark contrast Sutton & Epsom have a solitary success over Brighton and numerous near misses.

The match ran true to the current form book with the dominating Dons triumphant to the tune of 41-10.On a chill afternoon with leaden skies that threatened rain throughout S& E welcomed back Robbie Martey but were missing four forwards who had run Oxford Harlequins so close last weekend. Freddy Bunting kicked off as Sutton had the slope in their favour whilst Wimbledon had the breeze. The game started at a high tempo with both sides probing each other’s defences.

First blood went to the hosts as wave upon wave of attacks crashed against S& E’s formidable defence until they won a 5-metrepenalty. Scrum half Alex Kerr tried to catch the Black &  Whites out with a quick tap but moments later Ollie Kitto was scoring in the corner. Ed Morgan’s conversion missed as the Dons led 5-0.The visitors replied in an instant, harrying the hosts from the restart they were awarded a penalty and Freddy Bunting made it 3-5. The Rugby Lane team had to be at their resilient best. They were aided on several occasions as the Barham Road boys failed to apply the coup de grâce.

On 20 minutes, it was a forward pass that denied the Dons.Five minutes later they made amends in stunning style. From a scrum near halfway a rapid blindside break was superbly executed as Alex Kerr scored and Ed Morgan added the extras for 12-3. Next it was Ollie Kitto who looked like creating another try but a forward pass by a prop meant another score was chalked off. It was a temporary stay of execution as the SW20 outfit took advantage of a 5-metre line out. A clean catch and a powerful drive ended with Max Freeman scoring and Ed Morgan’s boot increased the lead to 19-3after half an hour.The Cuddington Crescent team brought on Matt Harwood for an injured Ewan McTaggart and tried to gain a foothold in the fixture.

Wimbledon was not content with their healthy lead and attacked at every opportunity as the Black &  Whites’ tackling had to be at its resilient best and they scrapped for every ball at the breakdown. Twice more the home supporters groaned when first another forward pass and then an errant delivery undid their best efforts. The first half ended with Sutton trailing 3-19. For S& E it was vital to score early in the second period to resurrect memories of the jinx that afflicted the league leaders last season. If the visitors could score perhaps all those missed chances in the first half would weigh heavily on the minds of the hosts.The match resumed with Wimbledon piling on the pressure down the hill. It only took five minutes for Ollie Kitto to add the finishing touches for 24-3 and his second try.

The hosts were in no mood to ease up and replacement prop Malek Touilzak broke from halfway but a delayed pass gave the Sutton cover the opportunity to escape and Tom Boaden was on hand to steal and the danger was averted. However, five minutes later Malek Touilzak made amends as he powered over from close range. Despite the conversion failing the lead was now 29-3 in deteriorating conditions. S& E finally got their hands on the ball and a well-angled run by Robbie Martey was only halted by a high tackle and Wimbledon were reduced to 14 men for 10 minutes. Sutton opted for the scrum and turned the screw winning a penalty and taking it quickly advanced into the 22.

With the hosts on the retreat with an overlap S& E inexplicably kicked the ball. But despair turned to delight as soon after replacement Jack Howes, only just on the pitch, scored from a well executed line out. Freddy Bunting chipped over the conversion to reduce the margin to10-29.With fifteen minutes remaining the game opened up. A quick penalty in their own22 saw replacement Rhys Morgan make a thrilling break deep into the opposite 22 where Ollie Kitto was on hand to score and collect yet another league hat trick for the lethal winger this season. Ed Morgan’s aim was true to make it 36-10.

As the Rugby Lane men went searching for a late consolation try the Beverley Meads men threatened to cut loose.Ed Morgan rounded off a fine afternoon at 10 as he dummied his way through the defence to score his team’s sixth and final try. Though he failed to add the conversion to his try the Dons were now 41-10 to the good.In the final ten minutes Sutton’s chances for an additional score were undone by errors, no doubt due to understandable weariness after the draining effects of so much defence and tackling. The hosts were not error free as the familiar forward pass returned and probing kicks came to nought.

The final whistle blew and the 41-10 result meant that the hosts collected another bonus point win to stay in pole position whilst the visitors contemplated life at the other end of the table. Wimbledon thoroughly justified their lofty status atop of the league. Slick passing in the backs with plenty of pace and skill, robust ball-carrying forwards and a hard tackling defence is a potent cocktail for success. Sutton were, to a man, unflinching in defence making tackle after tackle as they tried to stem the flow but were second best on the day.

The league programme continues next week, Saturday 12th November, as Sutton host Havant who beat S& E home and away last season. The Black & Whites will be looking to redress the balance this time. The kick off will be 2:30pm at Rugby Lane.