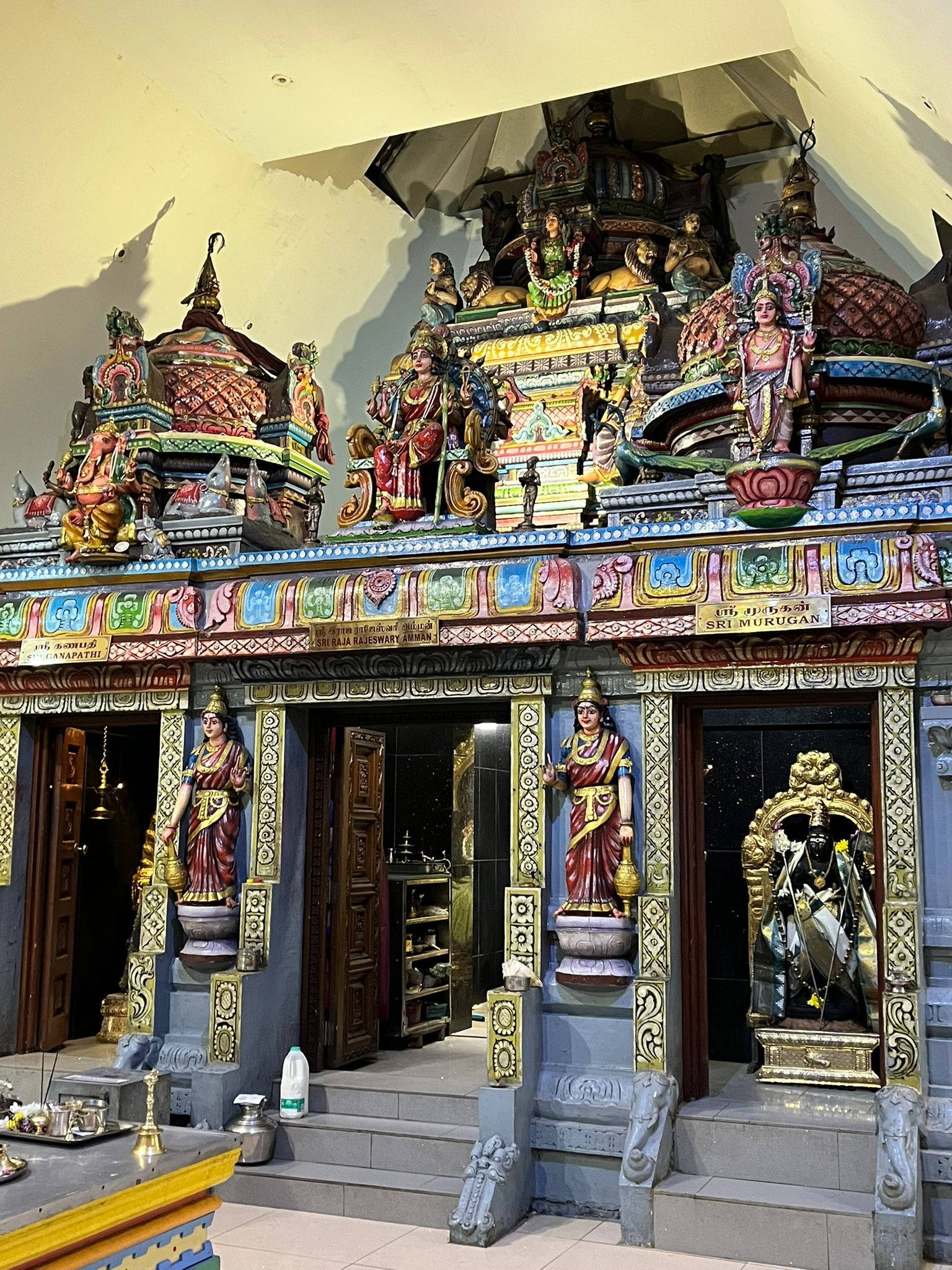 Scintillating festivals and folk songs that are sung in Hindu culture bring nothing but life to Surrey. With the houses adorned like a bride, and temples flocked by those who follow the religion, Hinduism is a way of life. Our country is a multicultural state, where people from different beliefs, cultures and backgrounds have settled. Spreading its idea amongst people, Hindu belief is now popular all over the world because of its festivals and traditions. To be more precise, there is no month without a festival.

Hindu belief has no specific founder, however, 95% of Hindus around the globe are known to live in India. Hinduism primarily has two symbols, one of which is OM and the other one is Swastika. Many recognise swastika used by the Nazis, however, in Hindu culture, it’s a symbol of divinity and spirituality in varied religions such as Hinduism, Buddhism and Jainism.

Established in 1994, the Sri Raja Rajeswari Amman temple lies in the heart of Stoneleigh, Epsom. The presiding goddess of the temple is Sri Raja Rajeswary Amman who is known as the mother of love and grace and showers her blessings upon all and develops the goodness within humans. The temple is hailed as an eternal place of devotion, purity and peace. Timeless statues of Hindu deities such as Sri Ganapathy, Sri Murgun, Sri Venktaeshwarar, Sri Pathmavati adorned with jewels and embroidered clothes are kept inside the temple.

The architecture of the temple comprises two rooms one of which is the area where devotees pray and perform pooja and the other one is for functions such as marriages, festivals and childbirth. Vibrant and beautiful carvings are echoed in its art and architecture. The mandir (Temple) is a lively and peaceful place for worshippers who often come in for their evening prayers. The usual opening hours for the public are from 8:30 AM- 1:PM and 5:30 PM-10:30 PM. With just two Hindu temples in Surrey, this temple attracts devotees from across the county on Tuesdays and Fridays.

The temple witnesses thousands of devotees every day forming long queues outside the temple right from the early hours. “It’s very good to see people follow their culture even after coming abroad. Festivals are celebrated with full enthusiasm and exuberance. Many worshippers even offer donations to the temple for better functioning ” says the temple priest, Visvnathan Sarma, who has been working at the temple for 25 years now. He added, “I enjoy working for the god, it’s always peaceful and soothing for me to spend my time here at the temple and I wish to devote my rest of the time here only”.

Worship is considered an important part of daily life. The majority of Hindu families have their own shrines where offerings are made and prayers are said to the deities. Worshipping involves all five senses:  touch, taste, smell, sight and hearing. Washing hands, bathing before the prayer, removing shoes before entering the shrine or temple are a few of common rules which must be followed. During the prayer, some offerings such as sweets, flowers and money are made to gods and goddesses. It is important for some men to wear a sacred thread over their left shoulder and hang it to the right hip. This thread is known as Janeu which means shouldering the burdens of life with patience.

There are various cultures in Hindu tradition and rules, marriage rituals, separation rituals might differ from each other. North Indian marriage rituals differ from what South Indian or Sri Lankan weddings perform. But you can expect that marriages traditionally involve a great number of guests, are bright, and colourful. A Hindu wedding is usually a week-long festival consisting of different functions every day which has deep philosophical and spiritual significance. During the wedding, the groom and bride take seven rounds around the fire (Agni) which binds both the couple to the seven promises of their married lives. Sindoor (Vermilion Powder) on their forehead and Mangalsutra worn by Hindu brides symbolises a woman’s marital status.

The caste system is one of the main reasons which divides Hindus according to their karma (work) and Dharma (duty). It is believed by many scholars that this system dates back more than 3000 years. The four main castes in Hindu belief are Brahmin(the intellectual leaders), Kshatriya(the protectors of the public), Vaishyas (the skilful producers) and Shudras (the unskilled labourers).The system forces individuals to follow the rule and only marry within a specific caste. Even though there are mandatory laws that protect so-called low caste people from violation and discrimination, there are only a few who treat everyone as equal.

Hinduism is enriched with wonders and shocks, it is widely followed and practised by people around the globe. The beauty of festivals, the joy of celebration, the taste of sweets and the bitterness of ancient customs are what constitutes Hinduism. Every belief comes with its rules and traditions, what matters is how it is passed on from generation to generation.