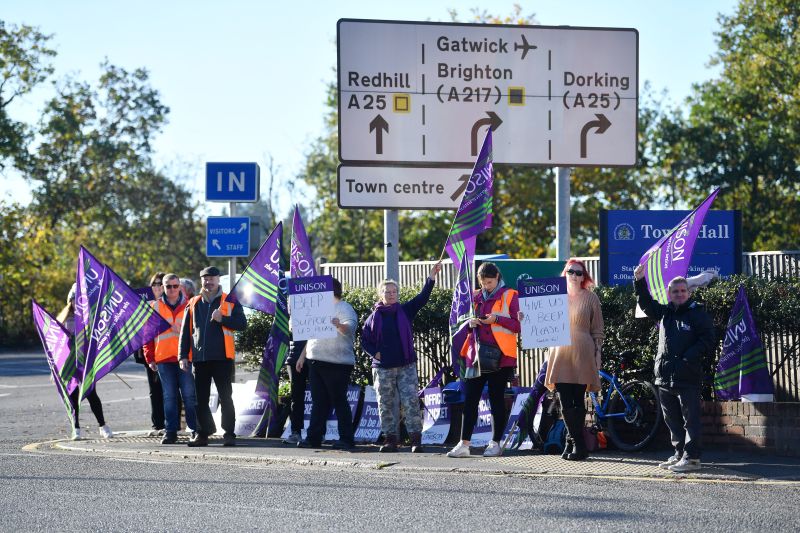 Reigate and Banstead Borough Council staff are using food banks and claiming Universal Credit, according to union officials, as workers go out on strike. Council employees have been offered a 1.3 per cent pay rise, labelled “insulting” by the Unison union. The strike will take place over Tuesday and Wednesday (18 and 19 October) with organisers calling for a greater increase in the face of rising inflation and the cost of living crisis.

Maggie Judd, principal local land charges officer at the council, is the union’s branch manager and said it’s the first industrial action in her 20 years at the authority. She said the council should be using some of its reserves to help staff with a better pay offer and the number of staff out on strike today showed the “strength of feeling” on the issue.

Unison said planning officers, parking attendants, administrators, refuse workers, cleaners, and security officers were on strike, and staff on the lower  pay grades at the council would receive an additional £200. Unison south east regional organiser Jenny Mason said: “This pay offer is nowhere near enough. Staff feel insulted. Many employees are using food banks and their wages have to be topped up with benefits. They’ve been forced to stretch their pay to make ends meet even at the best of times.”

She called on the council to make a better offer, and on the government to provide money to protect local services, saying residents would also suffer because staff would “vote with their feet and join other local councils offering better pay”.

A council spokesperson said around seven per cent of its workforce, 40 employees, were believed to be on strike, and all services continued to operate. They said the 2022/23 pay rise was in addition to cumulative increases in the previous five years from 2017/18 to 2020/21 totalling 10.13 per cent, and additional one-off payments, such as £250 paid to all staff during the covid pandemic in August 2020 and  £200 paid in April during National Insurance increases and rising living costs.

Council leader Councillor Mark Brunt (Conservative, Hooley, Merstham and Netherne) said the council had been making plans to minimise disruption to services since strike plans were announced. He said: “I am pleased to report that services, including our bin collections, are running as normal. We are disappointed that Unison has chosen to take this course of action. We are grateful to our dedicated staff for their ongoing hard work in challenging circumstances, and at the same time very conscious of the increased cost of living that they and their families are experiencing. However, the reality is that the council only has a finite budget from which we can offer a pay award. This is a national cost of living crisis, and increased costs and inflation are impacting the council’s budgets as well as those of households.”

Epsom and Ewell Borough Council does not have a formal recognition agreement with a trade union due to the small number of union members in relation to the whole organisation. UNISON has a seat on the staff consultative group (made up of locally elected staff representatives) which is the recognised body for consultation purposes for the Council. As there is no formal recognition agreement with any union there is no formally recognised “facility time” [paid time to undertake union duties] within the Council. EEBC website statement on transparency.

Reigate and Banstead Borough Council has 8 union representatives on its payroll and therefore do have “facility” time provided.

It seems unlikely that Epsom and Ewell Borough Council will be affected by strike action despite current inflation outstripping the pay award.