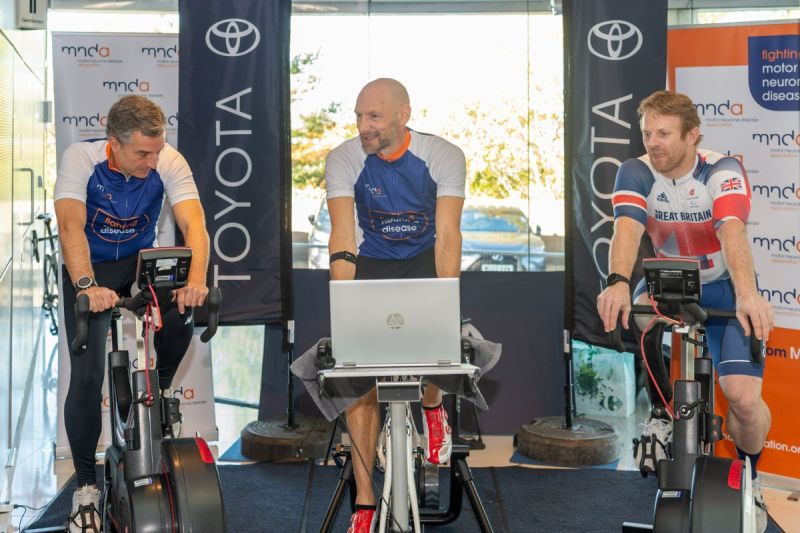 Greg Culshaw of Toyota‘s Epsom Head Office (GB), has completed a gruelling 24-hour static bike ride, putting him on course to raise more than £40,000 for the Motor Neurone Disease Association.  Greg is the General Manager, Customer, Network and Quality Support.

Greg began his challenge at 10am on Wednesday 17 November and was joined by a number of colleagues, including Agustin Martin, Toyota (GB) President and Managing Director, who completed stints on static bikes alongside him, to give him encouragement. Paralympic cyclist, Jody Cundy, and Mark Chapman, Director of Finance of the MND Association, helped cheer him on at the start of his marathon.

Toyota (GB) is halfway through a three-year partnership with the MND Association and has so far raised more than £78,000 for the charity, which focuses on improving access to MND care, funding research and campaigning on behalf of the MND community.

Greg was inspired to take on the challenge in memory of a Toyota colleague, Rachel Rollason, who died from motor neurone disease earlier this year. He commented: “Rachel and I spent four years working together in the Customer Services Division and it’s fair to say that she made a lasting impression on me. Her boundless energy and devotion to getting things done were inspiring. She operated on ’no limitology‘ before I had even heard the phrase.”

He added: “This has been a brutal challenge, but at the same time I’ve been focused on completing it for Rachel and the MND Association. The idea started in a conversation with Rachel and in her last text message to me, she told me how proud she was of me for taking it on. She continues to inspire me and in turn, made me proud of her.”

To date, Greg has raised nearly £16,000 through his Just Giving page: https://www.justgiving.com/fundraising/Greg24hrBikeRide. This will remain open for donations until the end of November.

Toyota (GB) has pledged to fund-match the total raised by Greg, which means the charity should receive around £40,000 to help it keep up the great work it does on its five key promises:

Mark Chapman, Director of Finance at the MND Association, commented: “Greg’s challenge is particularly poignant because he’s doing it in memory of his colleague Rachel. It’s brilliant to see so many staff members from Toyota rally behind him to honour her, knowing that every penny raised will make a huge difference to people living with and affected by MND.

Last year we provided £1.4 million of support grants for 2,479 people living with the disease.

The grants provided by the MND Association have helped people living with MND to maintain their independence and improve their quality of life, and we couldn’t do this without partnerships with companies like Toyota.”

Jody Cundy, eight-time Paralympic Champion (three swimming, five track cycling) commented: “It was a pleasure to join Greg for the first hour of his 24hour charity ride for MNDA. It was a tough challenge, but I hope my support and presence helped make it a little easier.”

Agustin Martin said: “Watching Greg complete this challenge while we went about our daily business has been humbling for all of us at Toyota.  We congratulate him for his for raising such a significant sum for the MND Association, our charity partner, and for helping to honour the memory of our much-loved colleague, Rachel Rollason.”