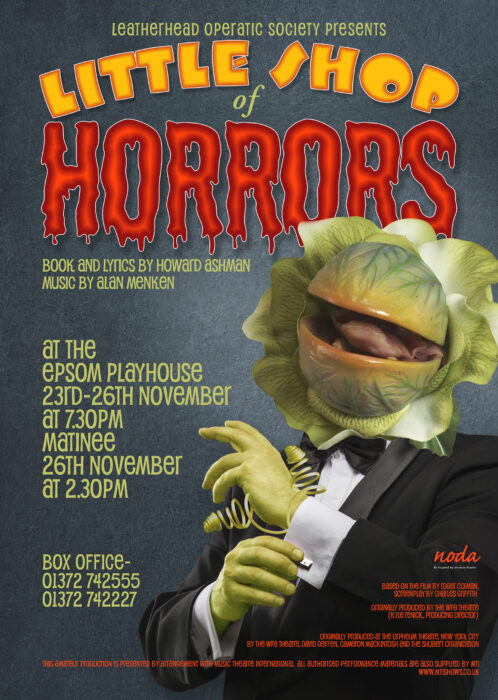 Leatherhead Operatic Society left the audience laughing and cheering with its production of Little Shop of Horrors at Epsom Playhouse, a musical comedy directed by John Harries, choreographed by Louise E Wilson and musically directed by Sam Fisher, based on the 1982 off-Broadway musical of the same name.

A failing flower shop on skid-row run by Mr Mushnik (Ben Horseburgh) is almost at the point of closing due to a lack of clientele. A Venus flytrap-looking plant, (Toby James) mysteriously appears during a total eclipse of the sun, attracting Seymour (Daniel Burns) to purchase it and name it after his love interest (played by Ellie-Claire King). This plant, however, is not an ordinary plant – it speaks, sings and lives on human blood and flesh, bringing new customers and, along with that, money and a name.

At first, Seymour can sustain Audrey II with his own blood, but this won’t be enough for the ravenous plant who promises Seymour his desires, a success story that could be “bigger than hula hoops”. What is Audrey II’s goal?

This is not the only question of morality that echoes throughout the performance: how far would you go for love? Or fame, or wealth? And should you feed the sadist-dentist boyfriend of your love interest to your human-consuming plant in order to keep it growing and attract customers? The story ultimately examines the extent to which individuals (Seymour, specifically) will go in order to be successful.

The cast’s performance is remarkable and leaves you questioning what you would’ve done in Seymour’s situation, with each character forcing the audience into an empathetic view of the situation. And for those who are already familiar with the story, a different ending to the 1986 adaptation of Little Shop of Horrors alongside the stellar performances makes it worth experiencing again.

The opening night on Wednesday 23rd November was a resounding success, and the show will continue throughout the rest of the week. The performance will run until the matinée show at 2:30 pm on Saturday 26th November.