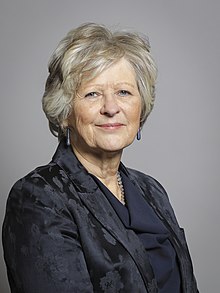 Baroness Sheila Hollins has joined Freemen of the Borough, the local MP and others in their Patronage of The Friends of Horton Cemetery. Baroness Hollins is a leading figure nationally and worldwide in the field of psychiatry. A former President of the Royal College of Psychiatrists and the British Medical Association, she is an adviser to The Pope on the protection of minors and is a cross-bench member of the House of Lords.

The Charity’s 50+ strong research team leader, Kevin McDonnell, said “We are truly honoured that the charity’s objects have Baroness Hollin’s endorsement. Especially as on 6th September we launch our project “Out of Sight, Out of Mind“, supported by Historic England and Kings College London. The story of the Cemetery and the Stories of the lives of those buried there are becoming significant locally, nationally and internationally. We have researchers and followers here, across the United Kingdom and overseas. An extraordinary heritage putting Epsom on the world map.”

Dr Alana Harris, Director of Kings College’s Liberal Arts Department said “The project aims to restore dignity to the 9000 patients buried beside Epsom’s Hook Road, in Europe’s largest asylum cemetery. Our project seeks to recapture these stories and to create a crowd-sourced memorial, overcoming historical amnesia, neglect, and inaction. We are seeking volunteers (who will be trained, and work in pairs) to lead public engagement ‘chat and craft’ workshops, which will discuss the history of the ‘Epsom Asylum’ cluster and its cemetery.”

You can find out more at an information session on Tuesday 6th September 4pm-6pm at St. Barnabas Church, Temple Road, Epsom KT19 8HA and you can contact the Project via www.hortoncemetery.org