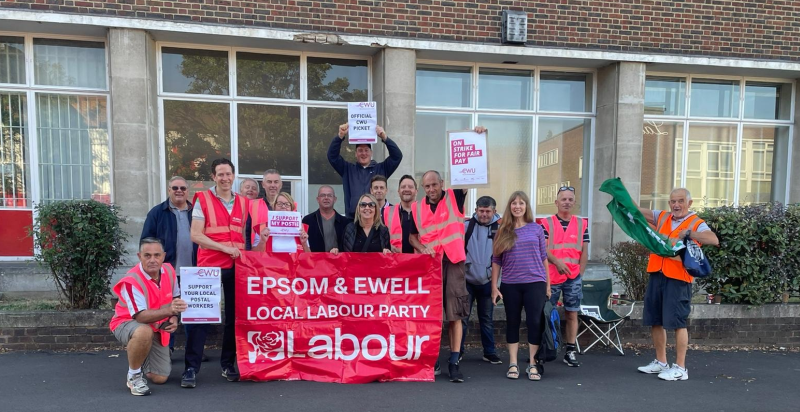 This will be followed by further strike action on Wednesday 31st August, Thursday 8th September and Friday 9th September.

The decision follows the union’s recent ballot for strike action over pay, which saw members vote by 97.6% on a 77% turnout to take action.

The union is demanding that Royal Mail Group make an adequate pay award that covers the current cost of living increases for our members.

Management imposed a 2% pay rise on employees, who were classified as key workers throughout the Covid-19 pandemic, through executive action earlier this summer.

In an economic climate where inflation looks set to soar to 18% by January 2023, the imposition would lead to a dramatic reduction in workers’ living standards.

CWU General Secretary Dave Ward said: “On Friday, we will see a tremendous outpouring of workers’ unity in villages, towns and cities across the country. There can be no doubt that postal workers are completely united in their determination to secure the dignified, proper pay rise they deserve. We can’t keep on living in a country where bosses rake in billions in profit while their employees are forced to use food banks.

“When Royal Mail bosses are raking in £758 million in profit and shareholders pocketing in excess of £400 million, our members won’t accept pleads of poverty from the company. Postal workers won’t meekly accept their living standards being hammered by greedy business leaders who are completely out of touch with modern Britain.

“They are sick of corporate failure getting rewarded again and again. Royal Mail’s leadership have lost the dressing room – and unless they make efforts to get real on discussing a pay rise that postal workers deserve, serious disruption will continue.”

CWU Deputy General Secretary Terry Pullinger said:  “Our members worked miracles during the pandemic and know full well what they are worth. They are fighting for a no strings, real-terms pay rise – something they are fully entitled to. Those managing Royal Mail Group are treating our members with contempt by imposing such a minimal amount. Royal Mail Group have failed to recognise the strength of feeling and have clearly lost the dressing room on pay, so they have left us with no choice but to fight. Our members deserve a pay rise that rewards their fantastic achievements in keeping the country connected during the pandemic, but also helps them keep up during this current economic crisis. We won’t be backing down until we get just that.”

Royal Mail has responded according to the Financial Times: “The CWU had rejected a pay award worth up to 5.5 per cent, which would have added about £230mn to Royal Mail’s annual “people costs” at a time when the business was already lossmaking. This decision by the CWU is an abdication of responsibility for the long-term job security of its members. In more than three months of talks, CWU has failed to engage meaningfully on the business changes required.

“We’re really sorry for the disruption that this strike action is likely to cause to you. We want to reassure you we will do everything we can to minimise disruption and get our services back to normal as quickly as possible.

Royal Mail has well-developed contingency plans, but they cannot fully replace the daily efforts of its frontline workforce. We will be doing what we can to keep services running, but customers should expect significant disruption.

On days when strike action is taking place:

What you can do: