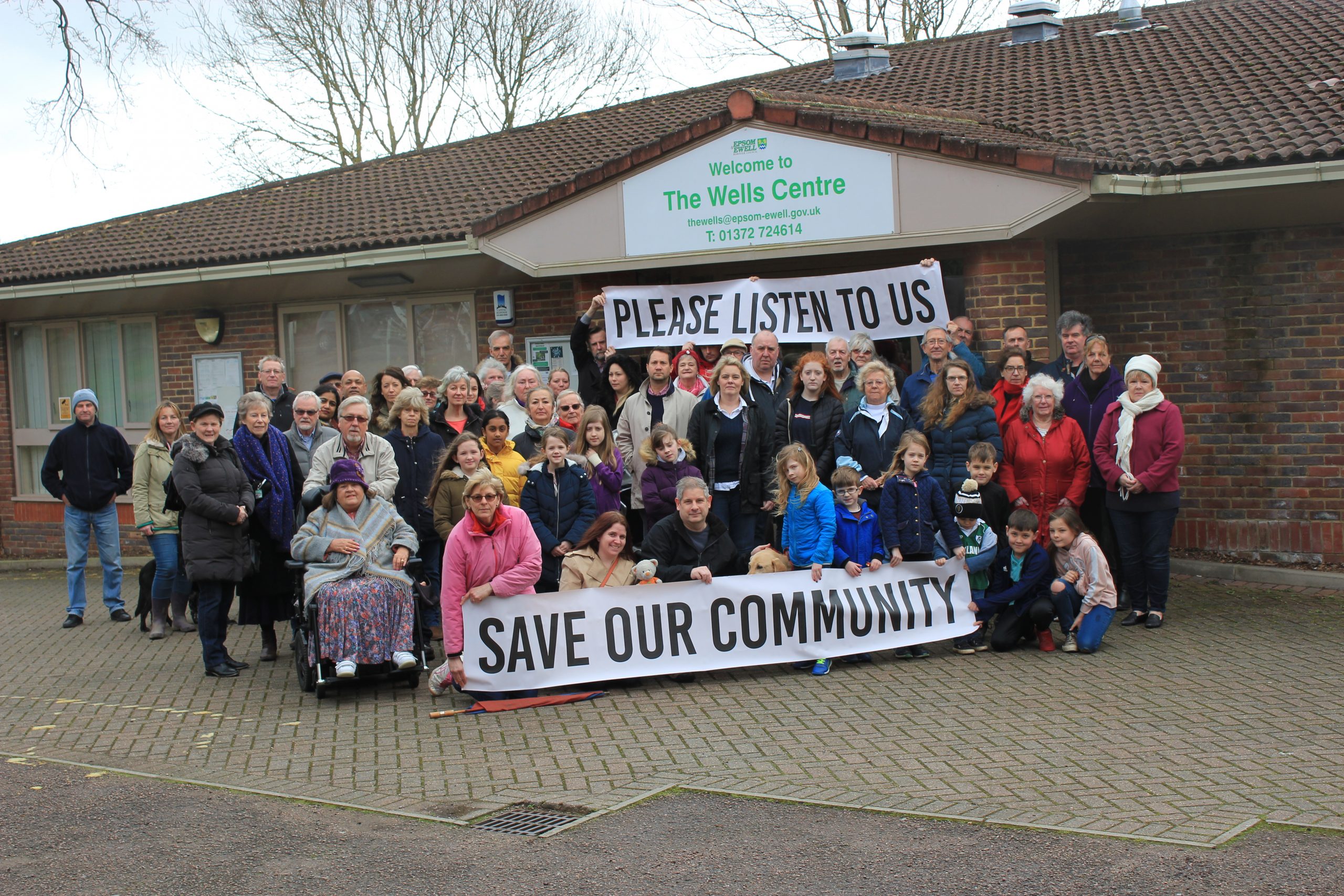 Epsom & Ewell Borough Council is to transfer the running of the long-mothballed Wells Community Centre, located at the end of Spa Drive, The Wells Estate in Epsom, to Epsom Wells Community Association (EWCA). EWCA is a charity newly registered in December 2021, whose stated aims are: “…… to reopen The Wells Community Centre. The centre will be available to the community for hire purposes. We also aim to run classes that fulfil our values of education, wellbeing, environment and community.” The Charity has a nine-strong Board of Trustees chaired by Vanessa Marchant, all residents of the Borough.

The Strategy & Resources Committee of EEBC agreed at its meeting on 29 March 2022 that the community group would take responsibility for the building and put it back into use for hire, a café, and a range of community-led activities.  The Council will grant a lease of the site with an initial two-year rent-free period after which the rent payable will reflect the community use of the building.

EWCA have produced a viable business case that sees the existing building renovated, and long-term managed by the Wells residents at no short or long-term costs to the Council and council taxpayers.  The business case proposal is for a “reimagined centre” which will mix community group use, private hire, a business hub and hot desk space with a community café.

It plans to reinvigorate the offering on the premises to deliver a modern, forward-looking, multi-generational community centre. The centre will support Epsom & Ewell’s “Future 40” plans, helping to make the Borough an even better, brighter place.

EWCA proposes to be responsible for the Wells site in its entirety and release the Council from any ongoing financial responsibility. In addition, the Council would receive rental income from the commencement of the third year of the lease.

Councillor Colin Keane, Chair of the Strategy and Resources Committee said “We have listened to the local community and worked with EWCA to enable them to develop a business case to run the centre.

“The Council is committed to enabling and encouraging EWCA to succeed and a revived facility would support the principle that enhances the Cultural and Creative opportunities in the Borough where people work together for all the community.

“Crucially, this plan will also remove any financial call on the Council’s resources to enable the Council’s other key priorities for residents to be pursued”.

The decision of the Council was a culmination of a five-year campaign by local residents to re-open the centre.

The plan to close the Council owned and run Wells Centre first came to light during the November 2015 County Council bye-election when the Labour Party candidate Kate Chinn brought it to light.

The Council had decided the decision should be made in secret. The minutes of the Strategy and Resources Committee for September 2015 indicate that an item was shielded from public scrutiny on the dubious ground of “Information relating to the financial or business affairs of any particular person (including the authority holding that information)”. It would be very odd if this right to exclude the public could be used to hide information about the Council’s own finances.

The Council eventually called a consultation meeting at the Wells Centre when every suggestion that residents advanced was stonewalled.

When the Wells Centre originally closed, a small group of locals decided to find out exactly what local residents thought of the closure. It became clear that there was not just a desire for the centre to re-open, but also a desperate need.

The group found isolated lonely people, families with nowhere to go within walking distance, entrepreneurial returning-to-work mothers who now had no premises, young people no longer able to access youth groups, and many more.

This core group formed EWCA and was supported by like-minded residents from elsewhere in the Borough and after petitioning, marching, canvassing, and researching, they were satisfied that a reopened centre was a viable business idea.

The business plan is over 80 pages long. In essence, the plan is for an integrated centre offering activities that fall into the following categories; wellbeing, education, fitness and environment. For a more in-depth overview visit https://indd.adobe.com/view/73d5b9e9-62ae-40ae-a457-282ada7246fa

Vanessa Marchant adds: “Post pandemic we are all more aware of what is on our doorstep, our communities rose to the fore and many don’t want to return to the commuter corridor lives they were living previously. With approx 70% of commuters now having a flexible week, activities within a 20-minute neighbourhood are due to get a real boost according to multiple news stories. So our already strong business case has been made stronger by the turbulent times we are living through. We will create a shorter version of the plan to share with people in the coming months.”

On funding, she said to the Epsom and Ewell Times – “We will not receive a subsidy from EEBC. We intend to apply to any and every fund we can, but primarily we are looking to YourFund, the National Lottery, CIL, local philanthropists and community fundraising initiatives.” In conclusion, EWCA thanks and appeals – “We are extremely happy with the Council decision. This result is the culmination of many years of hard work on the part of the local community, the members of the charity Epsom Wells Community Association (EWCA) and our council member advocates from Labour, Liberal Democrats, Conservative and the RA. The hard work of fundraising now begins and we will need help from the local community to make this happen.

Vanessa Marchant said, “That we won the vote is still sinking in but the real work in bringing the Centre back to life is just beginning.”