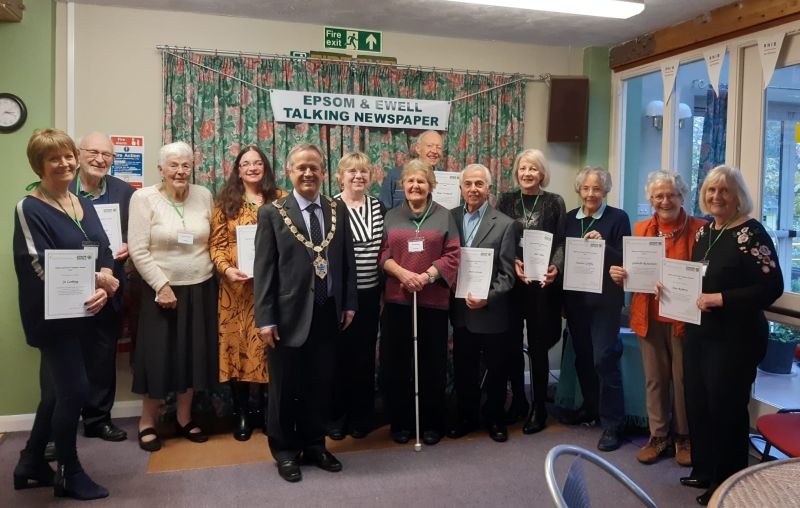 Time flies when you are enjoying what you do in life and it has certainly flown, say many of the wonderful people who have volunteered their services to help produce the Epsom & Ewell Talking Newspaper for a decade or more –some of them for up to an incredible 25 years!

On Thursday 1st December EETN’s Chairman Judy was delighted to welcome the Mayor of Epsom & Ewell, Councillor Clive Woodbridge and the Mayoress, Mrs. Mary Woodbridge, to Bradbury Lodge in the grounds of Swail House, for a very special Long Service Award Presentation, organised by Volunteers including News Editors Tricia and Julie and EETN Office Manager Heather. “We are giving long overdue recognition to the fifteen volunteers who have been committed to this special charity for ten years or more,” Judy began. “Two of those wonderful people, Gabrielle and Heather, have been with us for over 21 years and Penny has given 25 years of service.”

Judy raised much laughter when she explained that in the early days of EETN, which started in 1974, cassette recordings were made in a corridor outside a kitchen in Epsom’s Swail House. One of the long- serving Volunteers, she said, still remembered the smell of cabbage as she was recording. “ The recording ‘venues’ changed several times over the years, but in 1997 our current bespoke studio here at Swail House was opened –and here we are 2341 issues of EETN later,” she said.

In a brief resume of how the Talking Newspaper operates, Judy explained that many skill sets were required to deliver a quality service to the Listeners. These, she said, included Sound Recordists, News, Magazine and Supplement Editors, Readers with clear voices, the all-important Backroom Team- and our essential Social Media Manager who spreads the word so effectively about our fantastic service. “Without the whole team of Volunteers, EETN would not exist. Everyone plays an integral role in delivering this Free service to visually impaired people.”

Among the invited guests and volunteers were Robert Lahai, Swail House Manager, who organised the room for the presentation, Eamonn McNamee, Manager for Central Surrey Voluntary Action, who kindly read the citations and Serena Powis, from EEBC Community and Voluntary Sector Liaison Officer.

The Mayor, Councillor Clive Woodbridge welcomed hearing the background history of EETN, saying “The fact that the 15 volunteers we have honoured today have amassed a staggering total of over 200 years of volunteering is truly humbling. I am tremendously honoured to be the President of the organisation, continuing a tradition going back to 1991.”

After listening to the citations, which gave a brief insight into the role each volunteer had played over the years, the Mayor expressed his thanks, saying ‘We are truly blessed to have so many selfless, good people who give up their time freely in the community.’

Photos with the Mayor marked the occasion as certificates were presented, but the wonderful group shot perfectly captured the warmth and sincerity of the team with their Chairman Judy, herself visually impaired, and husband Amer. Amer’s vital contribution to EETN was also warmly recognised for the invaluable support he has given Judy in her role as Chairman for the last 11 years.

With formalities successfully completed, Judy then invited all the guests and Volunteers to enjoy some light refreshments while having a catch-up with each other and a jolly get-together.

The Epsom & Ewell Talking Newspaper is a free, regular audio service presenting local news, magazine articles and general features which are recorded and distributed on a memory stick to local residents who are blind, visually impaired or have difficulty reading smaller text.

For more information about this free service visit: https://eetn.org.uk

To contact EETN about becoming a Listener or a Volunteer email admin@eetn.org.uk

Ed: In accordance with “For the community, by the community”, Epsom and Ewell Times shares its content for free with EETN.