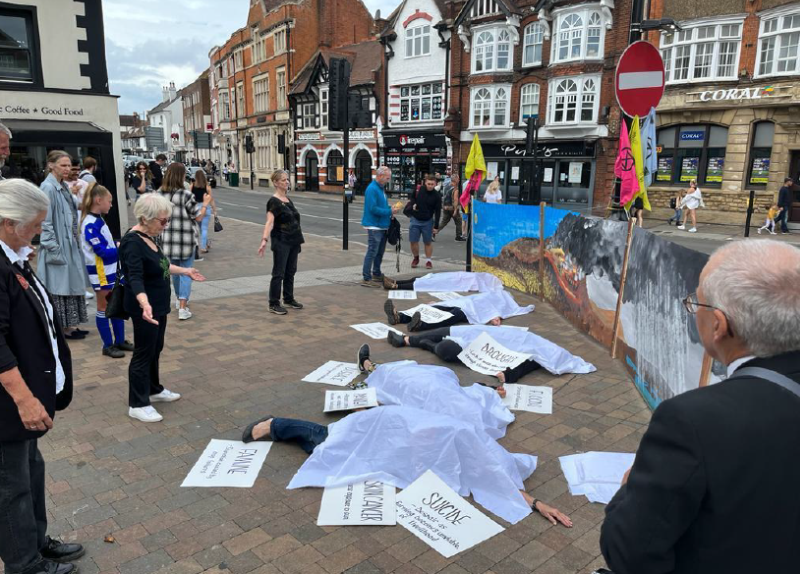 Sunday 4th Sept, Epsom & Ewell’s climate action group put on a hard-hitting and thought-
provoking street-theatre performance in Epsom centre. Right in the middle of town, on the big crossroads near the clock tower, a colourful backdrop had been erected, depicting landscapes ravaged by drought, forest fires and flooding. Against this backdrop, a dozen actors played out a silent lament, mourning the victims of climate disasters in the global South. The emotional impact of bodies on the ground being covered by shrouds was further amplified by a slow, powerful drumbeat and a bugle playing ‘the last post’…

Not surprisingly, this performance drew strong reactions from the public. Some felt greatly
strengthened in their perception that a changing climate is a grave danger to us all, and the cause of worldwide injustice. However, there were also some who disapproved of the graphic nature of the performance and who felt that ordinary people were made to feel bad for things that are really the responsibility of governments and commerce?

As far as the local climate action group (Epsom & Ewell XR) is concerned, all views for-and against are welcomed, as they feel the gravest danger to us all will come from indifference to the issues.

Further actions and street-theatre are being planned.

Epsom & Ewell XR can be contacted at epsomewellxr@gmail.com