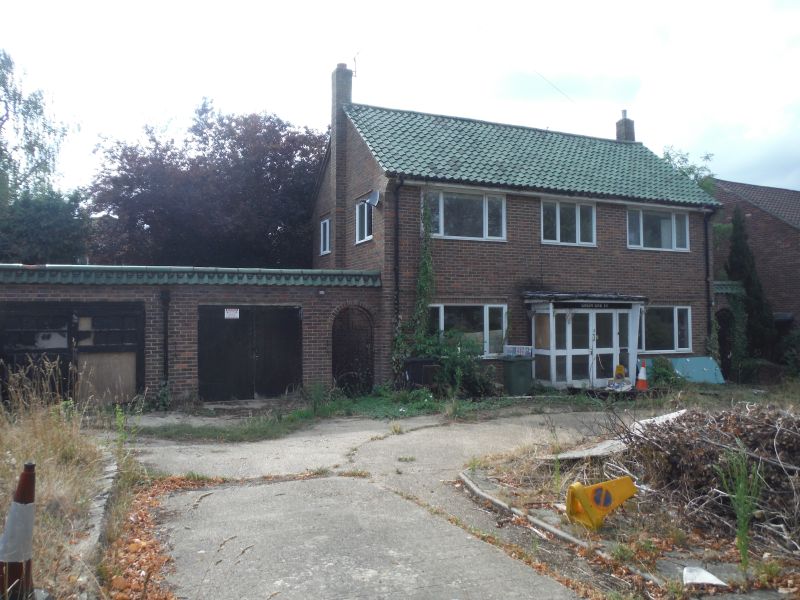 Council postpone a controversial planning application for their own site visit. Mr Colin Preston’s plan to knock down a neglected house called Green Gables in Ashley Road, Epsom was deferred. A 22 student bedroom development is proposed to take the place of the neglected Green Gables house. The development provides no more than 8 square metres per bedroom with two shared kitchens and two shared living spaces. Thursday 1st September, Epsom and Ewell Borough Council’s Planning Committee discussed a number of objections matching the number of bedrooms. 22 in all, concerning loss of privacy, overdevelopment, impact on the nearby Worple Road conservation area and many other grounds.

The Woodcote (Epsom) Residents’ Society submitted “…excessive scale would be visually obtrusive, over-shadow the rear gardens and result in significant light spillage from the glazed stairwell and lobby area at night. The amenity area would give rise to unacceptable levels of noise and disturbance and the narrow footpath between the proposed buildings and the boundary with Ladbroke Road properties being a potential area for antisocial behaviour and security concerns…”

The Strategic Housing Market Assessment (SHMA) of Epsom and Ewell BC dated September 2019 concludes that “there does not seem to be a great demand for additional Purpose-Built Student Accommodation (PBSA) at the moment”. Mr Preston, the developer, contacted the University of the Creative Arts (UCA) situated just yards away in Ashley Road. UCA responded with the following: “We can confirm that UCA is broadly supportive of an increase in provision of student accommodation in and around Epsom and Farnham, both in Surrey. We have opened a dialogue with the local authorities in both towns, with a view to enlisting their support in addressing what is an increasing need for suitable accommodation for our students.

For the current year 2021/2022, UCA has approximately 1,800 students enrolled on our Epsom campus, of which 321 first years were housed in university provided accommodation. The others rely on the local private rental sector, or commute further away. Recently UCA also commenced a February intake into our Business School for the Creative Industries which is proving quite attractive to students, especially those from abroad.”

Following a 90 minute debate the application was not decided on pending a site visit voted for by a majority of the Councillors.

Epsom and Ewell Times understands that UCA is heavily oversubscribed for the coming academic year. More student accommodation appears to be required by the Borough for its growing University population.

At the meeting Cllr Liz Frost, not a member of the Planning Committee, (Residents Association – Woodcote Ward) spoke against the proposal. She described the proposal as “Overdevelopment, far too close to neighbouring properties and overbearing. Rear of properties will be flooded by lighting from the development. Inevitably there will be disturbing noise effecting enjoyment of neighbouring gardens. Conditions suggested to deal with noise are unenforceable without a warden on site. The 32 square feet of outside amenity space wholly inadequate.”

Local Ladbroke Road resident Paul Ring described the development as “a cramped student house in multiple occupation (HMO) and there would be disturbance from the movement of students in a narrow space”.

Spencer Copping, the agent for the applicant, defended the application and asked the Committee to support the recommendation of the Council officers to approve the plan.

The Council Officer argued that there would be a requirement for a “management strategy” to deal with anti-social behaviour and that would mitigate risk of disturbance of neighbours.

Cllr Steve McCormick (RA Woodcote) expressed concern about the lack of amenity space for the students. The Officer explained that as a student accommodation the development was not subject to amenity space requirements and the nearby Rosebery Park mitigated this. The Councillor proposed refusal of the application. Cllr Previn Jagutpal (RA Stamford) also spoke against on grounds of the density and lack of amenity space.

Cllr Alex Coley (RA Ruxley) asked for the matter to be put off to allow a Councillors’ inspection and despite the Chairman Cllr Humphrey Reynolds describing site inspections as a “waste of time”, a majority voted to inspect. If a decision had been reached approval would have been voted for by Cllr Kate Chinn (Labour Court Ward) who recognised the need for more student accommodation in the Borough. Cllr David Gulland (LibDem College Ward) reluctantly accepted there were no legal grounds to refuse that would withstand an appeal to an inspector and would vote in favour.

Cllr Jan Mason (RA Ruxley Ward) could not accept that 22 students should live together without a responsible supervisor living there. They would play hip-hop music and make noise. She thought the rear of the development looks “like a prison”. She asked “Why white brick? That would not fit the area.”

Green Gables‘ registered proprietor is one Bernard Wells who has owned it since at latest 1994 and the property is subject to a Swindon County Court charge in 2008 in favour of Thames Water Utilities Ltd. The Land Registry entries can be out of date due to months’ long backlogs in data entry.