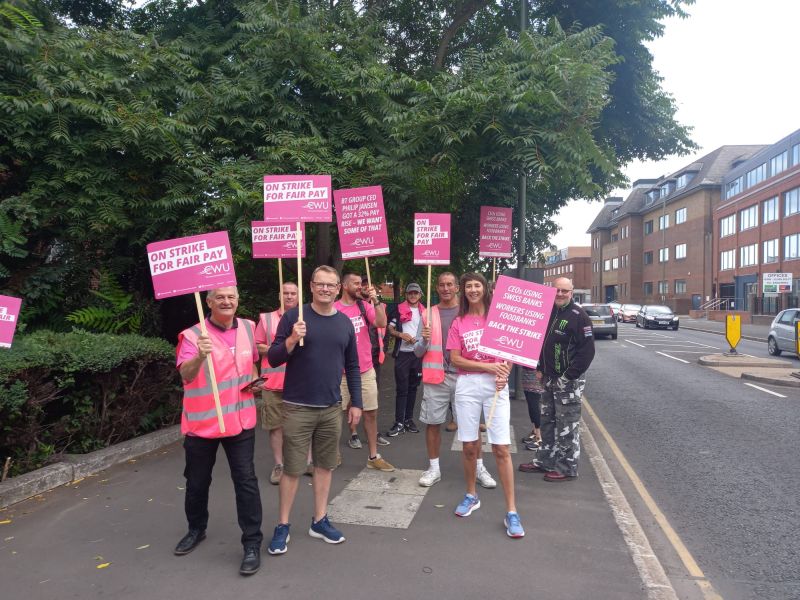 Following a strike of mail workers and a picket at Epsom’s East Street Sorting Office CWU workers picket the telephone exchange on the other side of the street. See our report on postal strike HERE.

The dispute, which involves more than 40,000 CWU members working for BT and Openreach, was triggered by BT’s imposition of real-terms pay cuts for all CWU-represented grades, claim the Trade Union.

CWU claim that instead of following normal negotiating protocols – under which a draft deal that is fair and acceptable to both sides is arrived at through discussions, and then recommended by the union to its membership for their ratification – this year BT abruptly terminated the talks after just six short meetings. Firm proposals had only been tabled by management in the latter two of those meetings.

BT claims the flat-rate settlement of £1,500 equates to between 3.8% and 8% dependent on where individuals sit on the pay scale.

The CWU therefore calculates that even the biggest beneficiaries of this year’s imposed flat rate pay award have only received around 5%  – with the vast majority of CWU-represented grades receiving only a little over 4% and some below 3%. That compares with spiralling inflation that saw the Government’s preferred (typically lower) CPI measure hit  10.1% in July  (RPI  12.3%) and  even the Bank of England predicting CPI will top 13% within months.

As a result, the first national industrial action in BT Group for three and a half decades took place on July 29 and August 1 and again on Tuesday August 30 and Wednesday August 31.