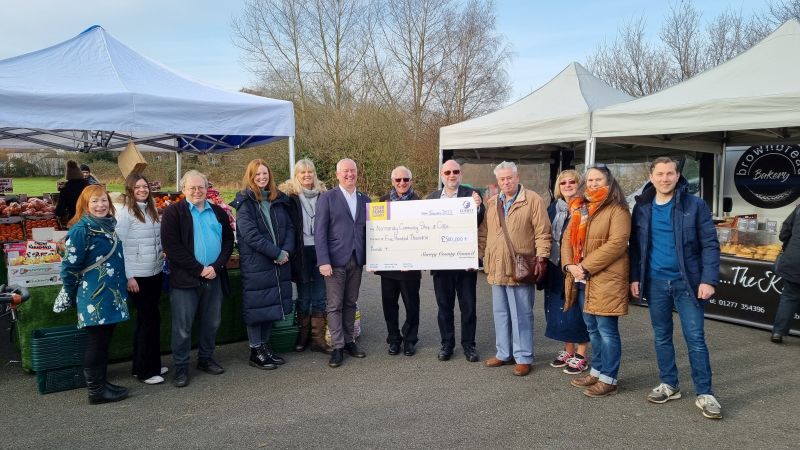 Questions have been raised about a community cash project and whether it is reaching those in Surrey who are most in need. Surrey County Council plans to allocate £100million over five years, with residents and community groups pitching for money for their areas. At its last cabinet meeting on September 22, £586,000 was allocated from the council’s Your Fund Surrey community fund for the rebuilding of Ripley Village Hall and £982,000 was given to the Old Woking and District Community Centre.

Image: More than £500K was awarded for a community shop and cafe in Normandy from Your Fund Surrey. Credit Surrey County Council.

But a motion put forward at the authority’s full council meeting on Tuesday (October 11) called for the fund to be paused in next year’s budget, in a financial climate that is “very different” from when it was established. Epsom Councillor Jan Mason (Residents Association, West Ewell) said in her area she had two of the county’s most deprived estates, and among the lowest car ownership, meaning people couldn’t necessarily travel to community facilities elsewhere. She claimed the money had been “wasted”, saying she was sure some councillors had “lovely clubs” for people in middle-income areas.

Cllr Mason added: “You’ve taken the money from the people in my area that are on low income, and they are paying their rates, they’re not getting out of that. But they’re actually paying for things that no one asked them do they want to have?” Cllr Mason took issue with councillors being told to work with their communities on getting the funding and has spoken out before on the lengthy application process to get the money. She added: “I know what it’s like, so don’t say to people like me: ‘What you’ve got to do Jan, is work with your communities.’ Yes I do, and I’ve always done for 20 years.”

Cllr Denise Turner-Stewart (Conservative, Staines South and Ashford West), cabinet member for communities and community safety, said the fund had so far given 14 projects £4.5million, with another seven applications worth more than £3.75m which could be decided by the end of the year. She added: “Many of the projects funded have focused on early intervention and prevention by promoting the health and well being of residents. “Funded projects have provided residents with a safe space to exercise, socialise and learn new skills. Bringing communities together on projects has helped reduce social isolation and there are numerous examples where projects have led to new connections being build out in our communities.”

She also announced that £50,000 would be allocated to each member for their area, aiming to simplify the fund from early 2023. Cllr George Potter (Liberal Democrat, Guildford East) called the announcement a “rabbit pulled out of the hat” and questioned if it should come in the middle of a debate and not via a leader’s statement or at a select committee. He said he welcomed the simplification of the process, hoping it might help some of areas of high deprivation in his division, though he raised concerns about rising costs of borrowing on the fund.

Cllr Nick Darby (Dittons and Weston Green Residents, The Dittons), putting forward the failed motion to pause the funding, said it was a question of “affordability, pure and simple” and not a question of not wanting to support communities. He said: “We are borrowing £100m or would be if it goes all the way through, and we cannot afford at the moment to do this.”

Council leader Cllr Tim Oliver (Conservative, Weybridge) called the “knee-jerk” move “premature at the very least”, saying the next year’s budget would be looked at over the coming weeks and a decision could be made. He said the council would continue to be prudent in budgeting, prioritising services to the most vulnerable children and families, but that the administration would not “abandon our residents and communities”.

Cllr Oliver added: “We should be optimistic in our ability to overcome these challenges. We have a track record of facing up to issues and finding solutions.”