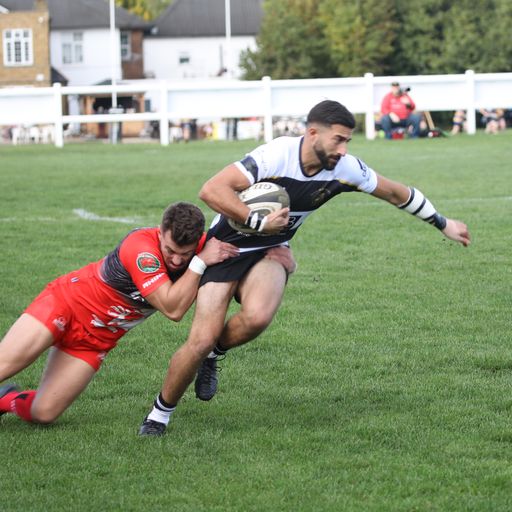 SUTTON & EPSOM 15 – LONDON WELSH 15. Saturday 15th October. It had been many years since London Welsh had visited Rugby Lane. In fact, it was 1958 and their side despite containing four full internationals only narrowly won a highly entertaining contest by 13-8. Fast forward to Saturday afternoon and both sides arrived with a meagre one win from five league matches and were much in need of a morale boosting victory. The visitors would argue that the fixture computer had not been kind as they had already faced four of the top five and perhaps their lowly status in the bottom three did not reflect their potential. At the final whistle the sides could not be separated, and it ended 15-15.

Freddy Bunting initiated proceedings as the Black & Whites kicked off in bright sunshine with a notable crosswind and ominous clouds looming on the horizon. From the outset London Welsh’s intentions were clear as they spread the ball wide and all their backs got their hands on the ball. Sutton and Epsom held firm and demonstrated a steely defensive reserve. Not surprisingly in the wind played havoc with many of the early line-outs. There were many early scrums from the throws blown awry. In the scrummage the hosts were encouraged by early dominance as they shunted the Welsh pack, depleted by injuries and absentees, into reverse. Despite their dominance in the set-piece scrums twice Sutton and Epsom were penalised for driving upwards, much to the irritation of the front row triumvirate of Mount, Craig and Boaden. In contrast in the loose the visitors were in control providing their backs a stream of possession as the back row trio of Davies, George and Williams burrowed and scavenged to great effect.

London Welsh had the first scoring opportunity but their endeavours were scuppered when they were penalised for crossing near the Sutton line. A swift riposte by Sutton and Epsom saw them take quick tap penalty with the ever-alert Ross Parsons breaking downfield. This led to a series of attacks with James Caddy prominent but the visitors’ defence was resolute and organised and the crowd continued to wait patiently for an opening score. The Old Deer Park XV sought to convert their favourable possession statistics into points. First of all their pack’s relentless advance to the line was halted as they were held up over the line. Freddy Bunting’s drop out from the Sutton line was a temporary respite. A moment later it required a superb collective effort to bundle the speeding Jonathan Ilori into touch by the corner flag. There followed relentless red shirts besieging the Sutton line. Finally, the Welsh dropped the ball in the left-hand corner stretching for the line. Sutton’s heroic defence was rewarded with a 5-metre scrum and the siege was lifted by a magnificent kick to halfway.

In the last ten minutes of the half the hosts found their rhythm and gained some possession. Kyren Ghumra had a run, Archie Fitzgerald muscled his way through and Robbie Martey continued to impress in his new role at 15. The best opportunity came from a wonderful break by Ross Parsons but a couple of phases later a very unforgiving long pass led to a knock on. The half ended with a penalty awarded to the visitors that was within kicking range. Dafydd Manley’s effort was blown wide. There was time for one last Welsh flurry as Elliot Hopkin jinked down the touchline before finally being bundled into touch. The first period finished 0-0 but the game was anything but boring as both defences had found immense reserves of resilience and defiance to prevent any score.

The match resumed with Robbie Martey prominent in defence and attack for the hosts. Sutton & Epsom opened the scoring in spectacular fashion after five minutes. Stealing the line out ball in their 22 they ran the ball from defence, wonderfully timed passes saw them break into the Welsh half where the ball was transferred to Ollie Baptiste-Wilson who finished in style evading all challengers in a 40-metre burst. The redoubtable Bunting added the conversion from the flank for a 7-0 lead. Ten minutes later, roared on by their numerous supporters, London Welsh levelled the score. From a line out on the S&E 22 the Welsh pack advanced remorselessly towards the posts, finally halted on the line the ball was released and scrum half Hywel Williams scored. Dafydd Manley added the simplest of conversions for 7-7.

The weather worsened as an initial drizzle transformed into driving rain in a ferocious wind. The more the weather deteriorated the more prominent the visitors became. The talismanic Rohan Pixley was introduced on the hour by London Welsh as S&E switched props with Will Lloyd replacing Alex Mount. The visitors were awarded a penalty that they kicked to the corner and the crowd anticipated another catch and drive score but the Sutton pack held firm to win a 5-metre scrum. Relief was short-lived as the Red shirts battered the Black & White line as viciously as the rain swept the pitch. Rohan Pixley was denied but passed to Tololima Savaiinaea who was held up near the line before Dafydd Manley popped over for the try. The centre failed to add the extras to his try but London Welsh led 12-7.

Sutton stormed back at once and encamped in the Welsh 22. Awarded a 5-metre penalty they battered the line but the forwards could not breach the defiant defence. The ball went wide and Archie Fitzgerald forced his way over in the corner. The conversion from the flank drifted wide but the scores were level, 12-12. The storm abated and the ground was bathed beneath a spectacular rainbow as the game entered its final 5 minutes. With the game in the last minute of normal time the hosts were awarded a penalty. Despite the 50-metre distance Freddy Bunting stepped up to put S&E into a 15-12 lead that was greeted with a deafening roar of approval. Joy turned to agony in time added on when London Welsh were awarded a penalty of their own in front of the uprights on the Sutton 22. A calm Dafydd Manley sent the Old Deer Park supporters into raptures levelling the game at 15-15 and a minute later it was all over. It had been a magnificent occasion, in no little part due to the wonderful and numerous London Welsh supporters, and a draw was a very fair result. The visitors will reflect on their first half dominance and multiple chances that were denied by the parsimonious S&E defence. The hosts will rue their naïve game management after taking the lead at the death. However, both teams can take great heart in immense defence in a contest where every yard had to be earned. For Sutton sporting their livewire back three, Robbie Martey was magnificent and Ollie Baptiste-Wilson, once again, scored a spectacular try. The hosts not only kept a clean sheet in the first period despite having so little ball but showed real character to retake the lead in the dying moments. Meanwhile, despite so many absentees, the visitors adapted to the situation with aplomb to put in a performance that would have swept aside a less cussed opponent. Their pack was tireless and particularly effective at the breakdown.

Next Saturday, 22nd October, Sutton and Epsom play Royal Wootton Bassett. It will be the first time in the club’s history that they will play the Wiltshire club. The kick off will be 3pm at Malmesbury Road and any supporters might like to avail themselves of the team coach.