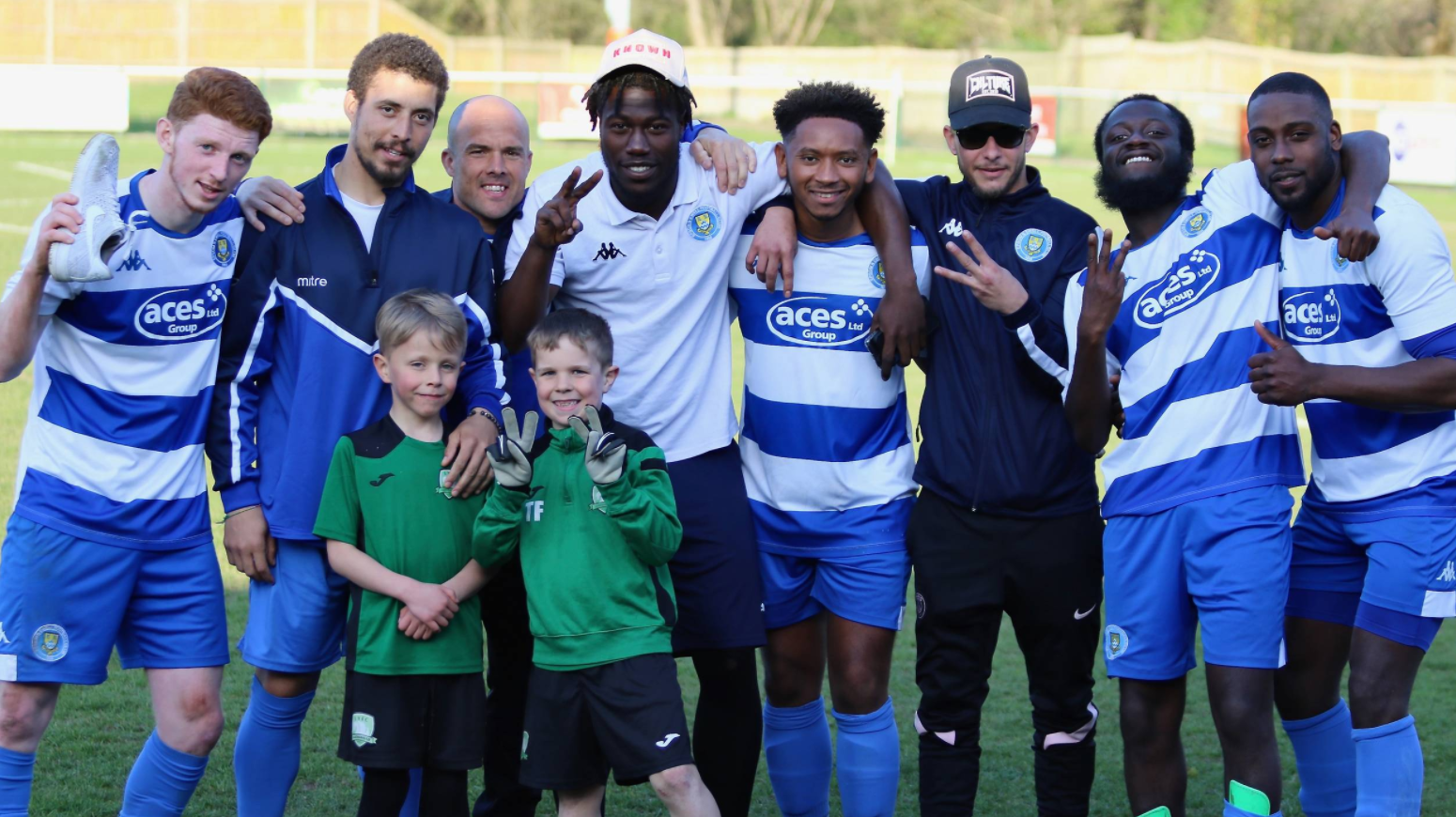 A few days ago we drew 0-0 with leaders Roffey, replicating the score from earlier in the season and on Saturday we did it again, only this time it was a 4-0 win that was repeated, as a dispirited and short handed Selsey side held their own for twenty minutes before being swept aside by a blue tide for the remainder of the match. It’s also worth noting that this was our third clean sheet in a row, which is the first time we have achieved this all season. This was an extremely dominant performance, and the only criticism that could be levelled at our team was our failure to be more clinical in front of goal, as we could and probably should have scored many more. Indeed, visiting keeper Sid Davies admitted to me at the end that we could have had ten. The win moves us back up into second place for now and was achieved without some players who had featured against Roffey four days previously; Gideon Acheampong was out with a knee injury, while Steve Springett was also unsurprisingly out after limping off near the end of that previous match as was Ricardo Fernandes.

However, Mike Hill was ready to go in midfield and with Athan Smith-Joseph and Luke Miller on the wings again feeding Kofi Quartey, we were always going to create chances. At the back Louis Chin came in for Acheampong, while Sheikh Ceesay retained his place between the posts as Kane Charles continued to rehabilitate with his ankle injury. Selsey named four substitutes on the name board at the ground, but actually only had eleven players present throughout and they weren’t the only ones who had trouble getting to the match as one of the Assistants was late arriving, so Chairman Mel Tough’s son Jack, a qualified official, ran the line for the opening eighteen minutes!

The match started very quietly. In fact the only item in my notebook was the change of official before we started to gain the upper hand just before the twenty minute mark. A left wing Smith-Joseph cross just grazed the head of a full stretch Quartey before Luke Miller jumped like a salmon against his much taller defender to head a Hill cross just wide. We were ahead in the 25th minute and it was a goal of real simplicity as Miller received a pass on the right and sent in a pinpoint cross for Smith-Joseph to meet with a side footed volley that gave Davies no chance from six yards out. We nearly had a second after a great run down the left from Mo Cisse whose low ball in was just cleared behind by a defender, missing his own posts by a couple of feet. However, we extended our lead in the 32nd minute when Hill sent the ball into the box where Miller flicked it on to Quartey who then struck the ball down into the ground and across Davies into the far corner of the goal from about ten yards away. This was also our 100th goal of the season and we weren’t finished yet. We were well on top now and the attacks kept coming. Hill’s shot was deflected just over the bar after good work from Tre Towers and Quartey before Hill’s corner was met by Brad Peters, who sent his header up but somehow was also the first to reach it as it fell, although his shot was just wide of the post. Hill was directing traffic now, despite playing ninety minutes in trainers, and we had a third goal on the stroke of half time when Miller tried to find Cisse out on the left, only for the ball to deflect and fall kindly into Quartey’s path and he showed real composure to wait until Davies had come out before easing the ball over the exposed keeper and into the net from the edge of the six yard box.

At half time this game was over and certainly some supporters thoughts were turning towards whether we could really boost our already impressive goal difference. We made a substitution at the break when Josh Uzun replaced Cisse and went after more goals. Smith-Joseph produced one of his trademark mazy runs but then sliced his shot from the edge of the penalty area, before Hill’s free kick delivery fell perfectly for Uzun who somehow managed to steer the ball wide from only six yards out. Then Tyreke Leslie who had just replaced Smith-Joseph got through on goal, but overrun the ball which ended up in the keeper’s arms. Not so for Miller though. He received the ball out on the right from Hill in the 56th minute and drilled the ball powerfully back across Davies into the bottom corner from about twelve yards out to make it 4-0. Now if someone had told me we wouldn’t score again at that point, I would have been very surprised, yet there were to be no further goals in this match. It wasn’t for lack of trying, and Hill’s deflected free kick led to a corner that Leslie headed wide at the far post, although a free kick had been awarded against us for an earlier infringement. Then Miller sent a teasing low ball in to the far post, but Leslie chose to hit it right footed and was inches wide from just a few yards out. Finally, our third substitute Archie De Bono made a great run from the right back slot and found Quartey at the near post who set up Leslie, but the shot was straight at Davies this time. Miller sent another shot just over the bar in the closing moments before we nearly had a lucky fifth goal in injury time after Uzun’s free kick took a heavy deflection, but the wrong-footed Davies was just able to recover in time to reach the ball before it crossed the line.

This was a tricky banana skin match. Selsey had been in good form coming into this contest, and whilst they were clearly not at full strength, this was still a good performance. I believe that three wins from our remaining three League games will prove to be good enough for second place, but if not, it would at least guarantee third and a home play off on Saturday 30th April. That has to be our target now.