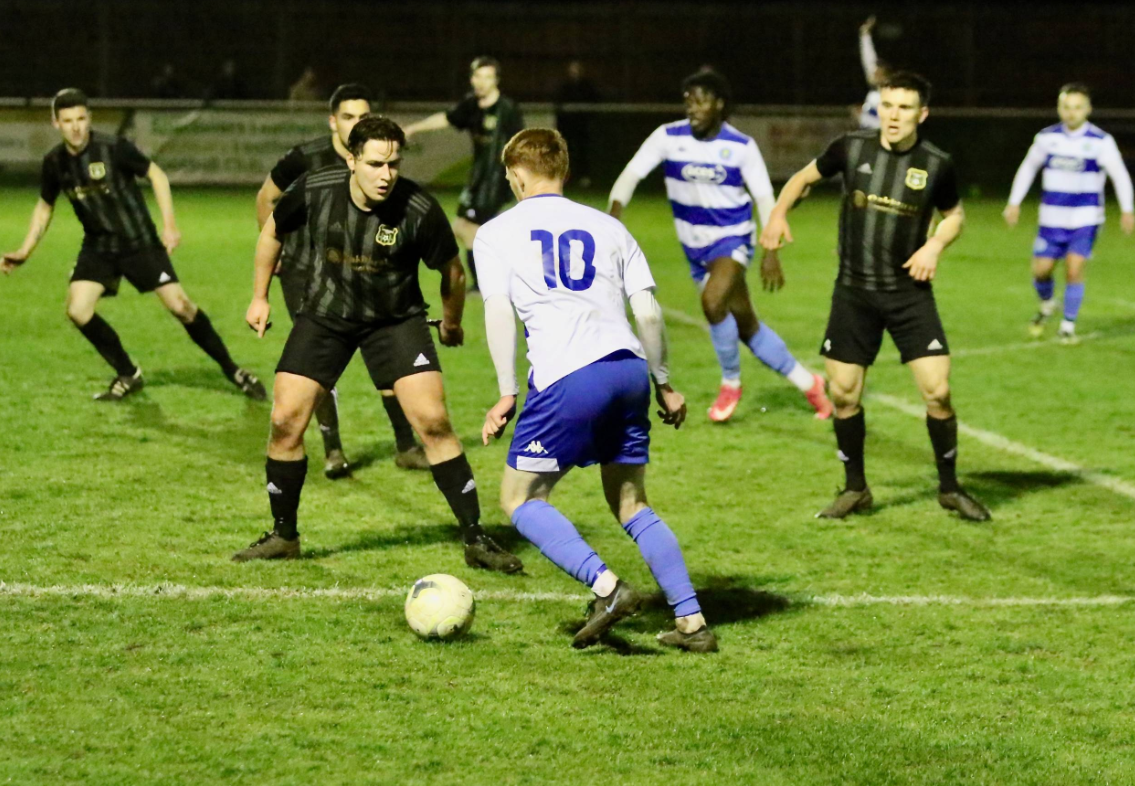 For a few weeks now we have been relying on other teams to drop points if we were to catch the top two. However, these permutations also required us to beat both of those clubs when they visited, and whilst we defeated Midhurst and Eastbourne ten days previously, we also needed a win against the leaders Roffey and we were unable to achieve this at Fetcham Grove on Tuesday night; being held to a goalless draw, which now ends anything but bizarre mathematical outcomes in our race for the title. It is ironic that we have had just two goalless draws this season and that both have come against Roffey. Both matches followed a similar pattern with our boys starting brightly, but tailing off and by the end, as with the first match, the visitors could argue that they were the stronger side.

It was a rather strange occasion really. Despite hardly any other matches being on in the area, a rather small audience were present to witness this match between two of the best sides in the league and it even appeared as though the opponents had an extra man. No, hold on, somewhere in amongst the visitors’ all black kit was the referee, who I’m sure was quite happy on the field watching two teams battle it out as he knew that he wasn’t one of the players, but for spectators it made for a confusing spectacle and when players gathered together it became almost impossible from the side-lines to see where he was! I suppose they say that the best referee is one you don’t notice, but we couldn’t even see him!

Regrettably leading scorer Jamie Byatt remained off the field with his injury and it might have been so different had he played as we had two chances in the early stages that you just know he’d have taken. In just the sixth minute a deep Mike Hill corner was sent back into the danger area by Tommy Smith, only for Brad Peters to get a strike on goal from 12 yards, but the contact wasn’t the greatest and the Roffey keeper Hughes was able to get down and claim the ball before it crossed the line. Then three minutes later another ball in from Hill reached Peters again who found Athan Smith-Joseph some four yards out, but Hughes was out quickly to block the shot superbly.

The tempo was extremely high from both teams in these early stages and the visitors fired towards the top corner from a free kick, but Sheikh Ceesay was there in time to keep the ball out. Then Ricardo Fernandes had a try against his former club from a narrow angle but found the side netting, and although a corner was awarded we were unable to get a shot on target.This was a highly competitive encounter though and Roffey’s Ross Swaine received a lecture from the referee, before our own Gideon Acheampong and Smith-Joseph were also given the third degree as the referee tried to keep the match card free. Smith-Joseph was particularly fortunate to escape further punishment and there were howls of protest from the opposition when Harry Law then picked up the first yellow card of the match five minutes from the break.

Another yellow card followed early in the second half after a visiting striker went down in the penalty area after Ceesay had come out, but our keeper made no contact and the referee deemed the fall quite rightly to be simulation. However, our attacks were becoming less frequent and when Hill broke through before sending a tame shot straight at Hughes, you began to wonder where we were likely to score from. Kofi Quartey was causing issues for their defenders but was rarely given even a half opportunity to shoot and both Smith-Joseph and Luke Miller were unable to get around their back line from where they usually do so much damage. We then had a scare in the 63rd minute when a low ball across from the left was met at the far post by Callum Jardim only to see his shot headed away off the line by the alert Steve Springett, running across to cover his lines. Two minutes later Josh Neathey made a good run to collect a ball over the top of our defence, but blazed his shot high and wide of the advancing Ceesay. Fernandes struck on target in the 68th minute and although Hughes was a little slow going down he palmed the ball away, but the game was becoming a little more attrition-al and a niggly scuffle broke out a few minutes later which resulted in another yellow card for the visitors; this time to Tiago Andrade, while shortly afterwards I think it was Peters that picked up our first card for kicking the ball out of the ground just after a free kick had been given against us.

The match ended with Springett being helped away gingerly with an Achilles injury and as he limped off, being replaced by Jerry Antwi, one of our other substitutes Josh Uzun received the ball from a misdirected Hughes clearance and sent it back with interest, but the effort was a yard wide of the far post and in fairness Hughes appeared to have done enough to get back to cover his goal. The match ended soon after and I think a point was a fair result. I would imagine that the visitors were the happier of the two teams with that point as they emerge from what looked like their toughest remaining match on their schedule unbeaten and still clear at the top, while for us, seven points behind and with only four matches left, we just have to aim to finish as high as we can.

The match ended with Springett being helped away gingerly with an Achilles injury and as he limped off, being replaced by Jerry Antwi, one of our other substitutes Josh Uzun received the ball from a misdirected Hughes clearance and sent it back with interest, but the effort was a yard wide of the far post and in fairness Hughes appeared to have done enough to get back to cover his goal. The match ended soon after and I think a point was a fair result. I would imagine that the visitors were the happier of the two teams with that point as they emerge from what looked like their toughest remaining match on their schedule unbeaten and still clear at the top, while for us, seven points behind and with only four matches left, we just have to aim to finish as high as we can. A second place finish would be our best achievement since 1984, although of course even this wouldn’t guarantee us promotion due to the invention of the playoffs. This is frustrating because last year four went up, while the promoted numbers were at least the top two and usually three in prior seasons, but we knew the rules at the start of the season and if we can keep our players fit and healthy, we will have every chance of success. However, the injury list is mounting, and we could really do with some more players back soon to give our Player/Manager a few more options, not least the one where he is able to pick himself again!

Overall though, and despite the draw keeping us down in fourth place, I think it was a point gained. One of our players commented that we had played well defensively, and that the visitors hardly had a shot on target. This is true, but at the same time we also created little and whenever our wingers got the ball there appeared to be a sea of Roffey players waiting to block their paths to goal. They were quite possibly the fittest team we have played, and despite the score line not suiting us, I was a little relieved to hear the final whistle at the end as they looked the more likely to break the deadlock. Are Roffey the best team we have played this season? I don’t think they were, and personally would have Seaford Town in front of them, but at the same time our league leading scoring attack has failed to score against Roffey in 180 minutes, so they must be doing something right! For our part, second place is still achievable, but with four league matches left, I think we will need to win all of our remaining four matches to reach that position. Failing that, we will be making a playoff trip to deepest Sussex instead of hosting someone at Fetcham Grove; a more difficult, but not insurmountable path.