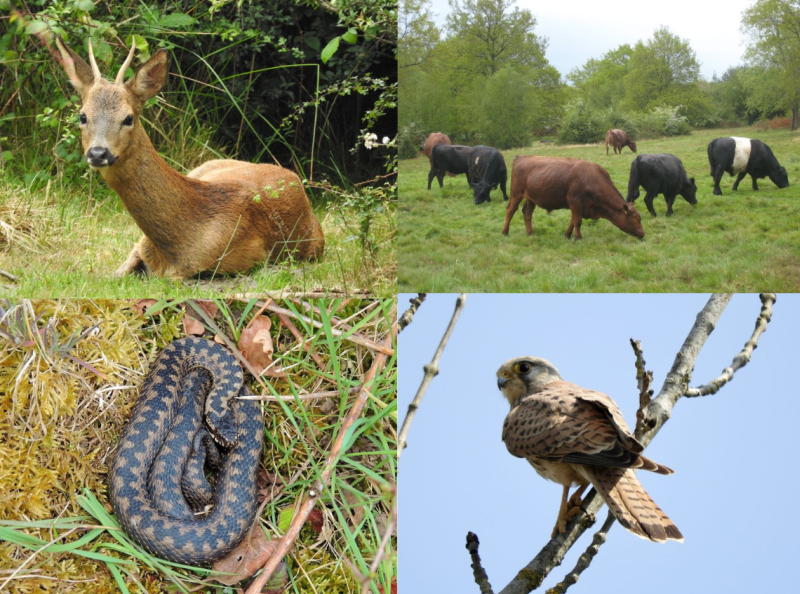 28th July David King and Cynthea Blunden of the Epsom Common Association (ECA) represented Epsom & Ewell at the Green Flag Award ceremony in Lambeth Community Hall. This marked the sixteenth successive year that Epsom Common has received this award, which describes itself as “the international quality mark for parks and green spaces”.
Much of the Common is designated as a Site of Special Scientific Interest. Natural England consider all of this land to be in “favourable” condition. Taken together, these points suggest that Epsom and Ewell Borough Council, which owns and manages the Common, is successfully balancing the various and sometimes conflicting demands of a recreational open space and a nationally important nature reserve. The new flag will be flying over Stamford Green just as soon as the flagpole that blew down last winter is replaced.

At 176 hectare, Epsom Common is the largest Local Nature Reserve in Surrey, with habitats including: rough grassland, woodland with veteran oak pollards, remnants of heath, and several ponds. Management is guided by the Council’s One Hundred Year Plan: 2016 to 2116, which has been approved by Natural England. Clearly woodland containing trees aged five hundred years or more takes some time to reach maturity, but even grassland, consisting of short lived plants, takes many years to fully develop its potential range of plants and animals. So planning for the long term is essential.

The ECA was founded by local residents in 1974 to fight a proposed road across the Common. In 1979, in partnership with the Council, the ECA completed the restoration of Great Pond dam, recreating the mediaeval pond that had been drained in the Victorian era. Nowadays the ECA has a membership of around five hundred households, and works closely with the Council’s Countryside Team and the Lower Mole Partnership to protect and improve the Common. After two years with activity limited by the pandemic, the usual programme of events has resumed.

As well as their conservation work, by the end of this year ECA will have: distributed three newsletters; held two public meetings with guest speakers; and arranged several expert led guided walks, looking at birds, butterflies, etc. Every few years they also hold an “Epsom Common Day” on Stamford Green, most recently in 2019.

On Tuesday evenings in summer (until the end of August) the volunteers hand-pull bracken for a couple of
hours, to prevent selected areas of heath or grassland being smothered. Their labours are relieved by a break for homemade sparkling elderflower drink and chocolate brownies. During the autumn ECA will hold the three remaining conservation tasks of the year’s programme of eight. Each task runs for two days, usually the third Sunday of the month and the following Monday. The task programme is guided by the One Hundred Year Plan and agreed with the Council’s Countryside Team. The work typically involves removing scrub and small trees to maintain and improve areas of grass and heath; they have also planted a hazel coppice.

Why is all this management work desirable? Old photographs show that before the Second World War much of the Common was open, with small areas of woodland and some old trees, many of which are still alive. Much of the open land was ploughed for agriculture during and immediately after the war. This ceased around 1955, and most of the Common was then essentially left alone. By the 1980s the previously ploughed area had become an almost impenetrable mass of young trees. This uniformity of age, along with the absence of the animals such as: aurochs (the extinct large wild ancestor of domestic cattle), wild boar, beaver, etc., that once shaped woodland and kept it more open, resulted in a habitat that was neither particularly natural nor rich in variety of
plants or animals. On the Common, grassland and lowland heath were probably manmade habitats, arising from a combination of tree felling and grazing, but they support species not found in woodland. By careful management a mixture of grassland, heath, ponds and varied woodland, can be created and maintained, leading to a much greater range of plants and animals.

During the summer, three areas of the Common are grazed by cattle, this year a total of fourteen animals. The cattle graze the grass and heathland in a way that cannot be replicated by mowing. In recent years the Great Pasture has been extended to include an area of woodland, a habitat in which the cattle’s ancestors would have been at home. Today’s Belted Galloways and Dexters also appear happy to forage amongst the trees, particularly during hot weather. For their health the cattle must be checked every day, as are the fence lines and water troughs. Each week the ECA provides four of the daily checks; without their contribution it is unlikely that grazing could be continued.

Finally, ECA make excellent hardwood charcoal from logs harvested during conservation work. Last year, thanks to a grant from the Council’s Community Infrastructure Levy, they were able to take delivery of a modern charcoal retort. Compared with the conventional ring kilns used previously, the retort greatly reduces the smoke and increases the yield. The charcoal sales help finance ECA’s activities. Volunteers are not paid, but of course they do have to pay for tools, fuel, insurance, etc.

If you would like to find out more about ECA’s efforts to keep the Common special, please visit their
website: epsomcommon.org.uk or our Facebook page:
www.facebook.com/EpsomCommonAssociation

They welcome new members, whether you wish to take part in conservation tasks or simply support their efforts through your membership.