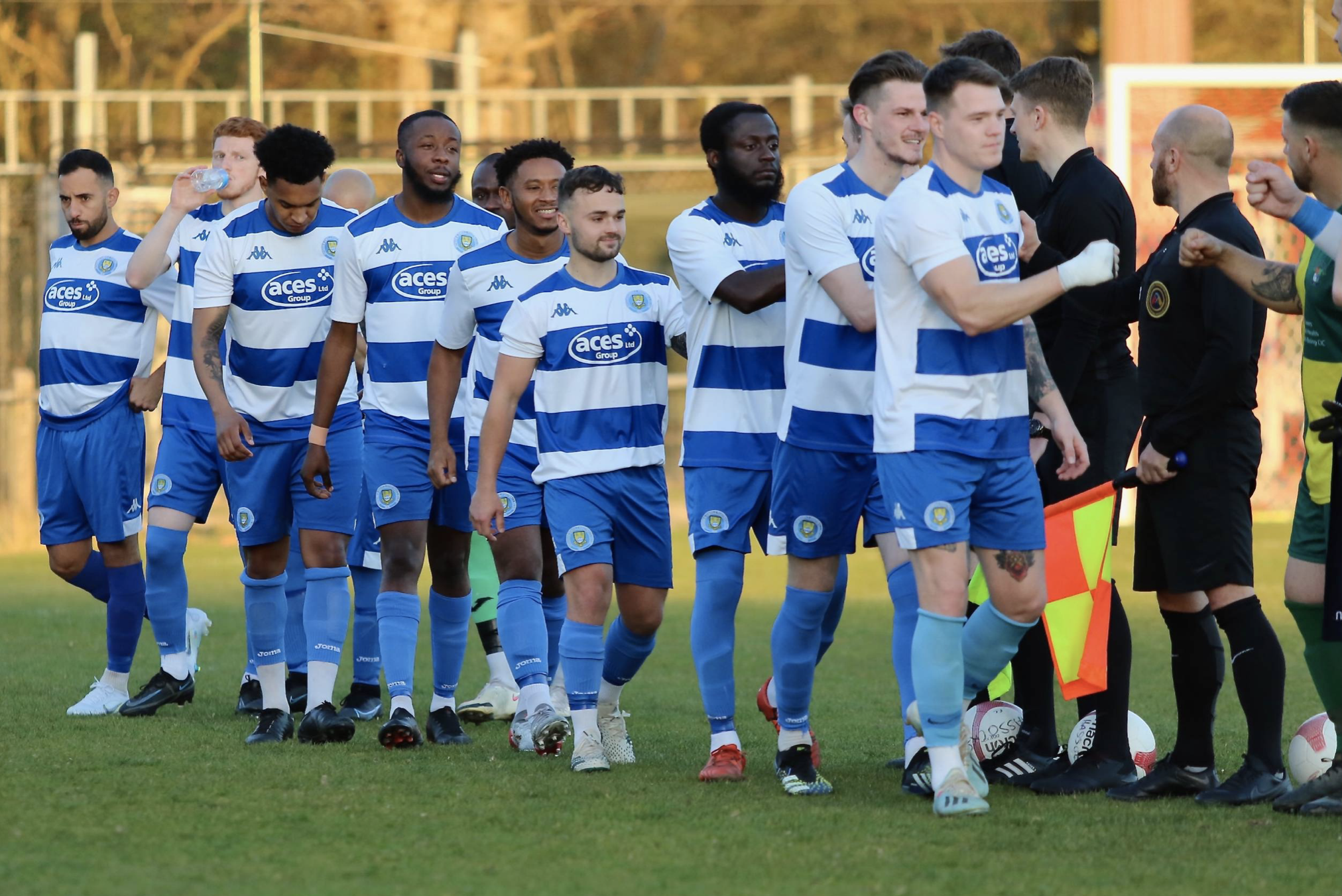 In my forty years as a supporter, this was the seventeenth Semi-Final I have witnessed. Some have been tense, nail-biting and really nervy, but our complete control of this match ensured a completely drama-free evening for our boys as we eased past the Hailsham Town challenge and won by three goals to nil to enter the Division One Cup Final, where we will meet Midhurst & Easebourne.

After an eighteen daybreak, it was to be hoped that many of our injured players would have had time to heal and it was good to see Jamie Byatt able to return to the field of play after a few months of struggling with an injury and he was joined by Steve Springett who had limped out of the Roffey match and started in place of the late-running Tommy Smith who would join later from the bench. However, Gideon Acheampong and Kane Charles were not yet ready to go and Mo Cisse and Josh Uzun were also absent.

Still, we had plenty of talent on the pitch and started well, controlling proceedings in the early stages and took the lead in the tenth minute. Tyreke Leslie had already found himself in dangerous positions but had been unable to convert. However, in the tenth minute, a ball into the left-hand channel from Luke Miller was struck across goal left-footed by Leslie and into the far corner to open the scoring.

Brad Peters headed a free-kick just over the bar before we had our only real scare of the night in the fifteenth minute when a Hailsham defender fell to the ground while battling with Jerry Antwi. The appeal for a penalty was made by quite a few opposition players, but the referee was not interested and the game progressed. Little did Hailsham realise that this would be about as close as they would get all night.

Next to strike at goal was Miller, only to see his low drive palmed away by Jack Lovick and we had another couple of efforts from Miller and Byatt flying wide before the halftime break.

In truth, we had eased off a bit towards the half, although words were had in the dressing room and the players came out in a more determined mood, and as with the first half, we scored ten minutes in when a clever low ball in from the left by Mike Hill was met by Byatt who showed he had lost none of his poacher’s instinct to dispatch the ball past Lovick from close range for our second goal.

Athan Smith-Joseph then took Byatt’s place after an hour and the attacks continued with Hill pulling the strings in midfield again. His strike on goal from twenty yards was turned wide by Lovick as we searched for a third goal. At the other end, Sheikh Ceesay had to venture to the edge of his box to head away a through ball, but he had very little to do on the night and we were soon back on the attack with Leslie flicking a header onto Hill who was just wide with another twenty yarder.

Hailsham couldn’t deal with Hill at all and Harrison Burley picked up a yellow card after dragging him to the floor. Although the opponents struck at goal in the 80th minute, it was well wide and high of the mark and we sealed the match with a third goal in the 81st minute when a ball towards the edge of the box left Lovick and a defender in two minds about whose job it was to clear the danger and Leslie nipped in between them to knock the ball into an empty net. Or so I thought, as before he did this, he chose to hold the ball up first as a defender tried to block on the line before then stroking the ball in from close range.

For those who like a stat, this was our fourth clean sheet in a row and the last time we achieved this was back in 1988 when our keeper was Jason Hopper! Bearing in mind that most of the plaudits this season have been directed at our league-leading scorers, this is quite an achievement. In reality, this was one of the most comfortable matches we have had in a while, and as we reach the business end of the season it is good to report that on this form we look capable of securing the points we need to ensure us of at least a third-place finish and a great chance of success in the playoffs. And now we have a Cup Final to look forward to as well.