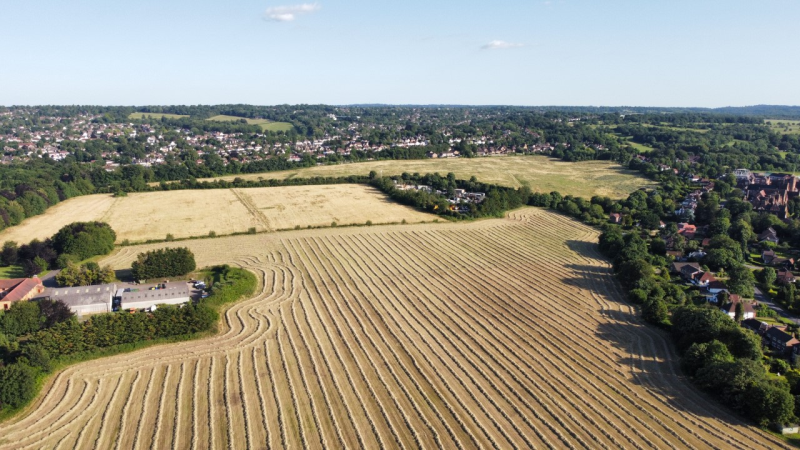 As Epsom and Ewell Borough Council is expected to publish a draft Local Plan in February 2023 Epsom and Ewell Times carries below an opinion piece authored by the Keep Epsom & Ewell Green Belt Group. We cannot confirm these campaigners’ contentions but we are happy to stimulate public discussion and interest through our pages. The Local Plan will shape for several years to come the decisions on new housing development locations in the Borough.

Alarmed by well-sourced leaks, residents have decided to come out fighting early against joint landowner and developer discussions with Epsom & Ewell Borough Council (EEBC) to build hundreds of homes on the 110-acre Downs Farm, destroying forever one of the closest Green Belt sites to London.

Other Green Belt sites near Epsom’s Hook Arena and Horton Farm are also believed to be earmarked housing in the Local Plan process, and it is even feared that other areas within  Epsom’s 42% of Green Belt land could also have been offered up and included.

Residents in Surrey’s already highest populated borough are so concerned that they are not waiting for what they say could be a flawed consultation process, expected in February.

Under Government pressure to deliver nearly 700 homes for each of the next 20 years, planning officers and councillors should instead be prioritising developer partnerships for an imaginative alternative “brownfield” core scheme, claims the residents’ campaign group.

However, following much-publicized Government climbdown guidelines announced this week by Secretary of State, Michael Gove, that top-down housing targets were to be “advisory only” and could be challenged by local authorities if the character of their area would be irrevocably changed, EEBC should be in no doubt, say residents, that Green Belt sites should be now removed from its Draft Local Plan.

By redeveloping the Kiln Lane/Longmead area closer to town centre facilities, “more starter and lower cost young family homes could be built – and bring much needed rejuvenation and job opportunity benefits. Yet there is little sign that the planners are engaging with developers on this opportunity, preferring the easier, but devastating, option of

The borough-wide residents’ campaign, “Keep Epsom and Ewell Green Belt” involves social media, mass leaflet drops, a new petition (https://www.change.org/EpsomGreenBelt) and its own website(https://epsomgreenbelt.org/). Some residents may well stand as independent Green Belt candidates in the May elections.

‘Our advice is that once a site has been publicly designated as suitable by the Council in the Local Plan, public consultations rarely change what are perceived as “done deals” – and we are not simply prepared to stand by and let that happen. In 2019, EEBC listed Downs Farm as a Green Belt site not suitable for development, yet it now appears to conveniently ignore this just because the site has been offered up to them’ said Yufan Si, campaigner of Keep Epsom and Ewell Green Belt.

Downs Farm is a rare chalk grassland habitat for protected species such as skylarks and bats, with regular sightings of deer, redkite and pheasant.

“Destroying forever high quality Green Belt sites will result in mainly luxury houses. We are deeply disappointed that the Residents Association controlled EEBC appear set to prefer Green Belt desecration over redeveloping a core brownfield scheme in central Epsom. Properly phased, this could be promoted as a creative industries hub, focussed on the town’s University of Creative Arts centre for excellence. As well as a much better mix of around 5,000 affordable starter and rented homes for young families, this would provide job opportunities in a much-needed Epsom rejuvenation.”

The Elmbridge Council Local Plan is cited as an example where the council and residents challenged unrealistic top-down government housing targets. It proposes redeveloped brownfield sites without any Green Belt destruction – despite having a greater proportion of Green Belt land (57%) than Epsom.

The residents’ campaign urges EEBC planners to quickly engage with brownfield developers using a £75,000 grant recently announced by the Government. Given its overriding remit to only prefer Green Belt development in “exceptional circumstances”, and the recent Government policy rethink on housing, this should be done before the draft Epsom Local Plan is issued in February, say residents.

Epsom and Ewell and indeed the whole country has a real shortage of homes. We cannot go on with a generation of young people who aspire to home ownership but … READ MORE

Epsom and Ewell Borough Council (EEBC) has approved a delayed timeframe for the development of its new Local Plan, putting it behind both government targets and other Surrey councils, amid … READ MORE

Tim Murphy’s opinion piece on Epsom and Ewell’s Local Plan. An up-to-date Local Plan is a necessity. It indicates to those proposing new developments or conversions to properties just what … READ MORE

Epsom and Ewell Borough Council’s Licensing and Planning Policy Committee (LLPC) met on the 26th of May 2022 to agree on a timetable for consultation on drafting “The Local Plan”. … READ MORE