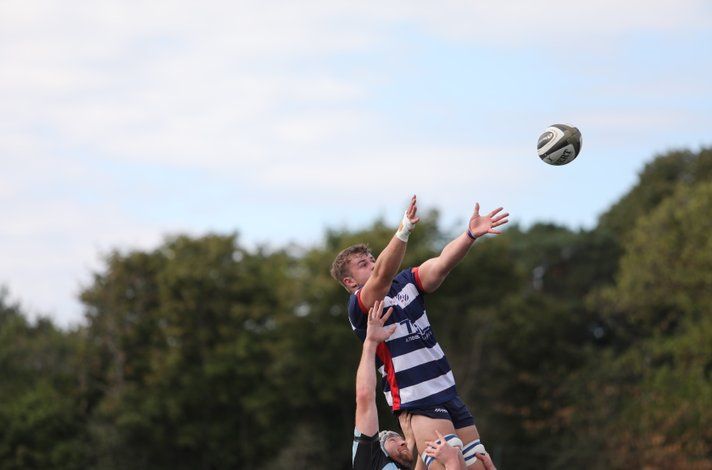 A two minute silence for the Late Queen was observed before this tightly fought match played out on 10th September 2022. This fixture would have been the first league encounter between these two clubs at Rugby Lane [the home ground of Sutton and Epsom RFC situated just inside the borders of the Borough of Epsom and Ewell,] but the unusually dry summer adversely affected Sutton and Epsom’s pitches. Therefore, in accordance with the regulations the hosts found an alternative venue and were most grateful to the generosity and hospitality of Cobham RFC for letting them use their splendid synthetic surface at Fairmile Lane. This was the first time in the league era that Sutton & Epsom had played a home fixture on a neutral venue though the club have experienced this situation on their travels in the past.

There were seven changes to the squad that lost the opener to Bracknell last Saturday. Returning to the fold were Sutton & Epsom’s stalwarts George Drye, James Caddy and Stefan Cooksammy. In comparison Robbie Martey (Barnes) was making his debut for the Black & Whites. Meanwhile Ross Parsons, Charlie Aylward and Luke Halford were making their first appearances of the campaign. Banbury also failed to win their first game of the season as visitors Havant triumphed at Bodicote Park 26-18. Both clubs were eager to get off the mark and record their first points at the second time of asking. It was mission accomplished for the visitors who recorded a 26-22 win and a bonus point to boot.

After the observation of the silence for Queen Elizabeth II Banbury kicked off the fixture. Soon the Bulls were on the scoreboard after solid ball from the scrum it was spun down the line and Quinten Blythe broke away down the flank and passed to supporting full back Tommy Gray to score for the perfect start. Ed Phillips added the extras for a 7-0 lead. S&E came back strongly with a charge down and turn over from the restart. To add to the woes of the hosts Stefan Cooksammy departed injured to be replaced by Sam Hurley.

Having reshuffled their resources the Rugby Lane team pressed hard to draw level. Just before the end of the first quarter the Black & Whites kicked a penalty into the corner. Following a line out and another penalty hooker James Craig forced his way over from a rolling maul for his first S&E try. Freddy Bunting added the conversion to level it at 7-7.

The game ebbed and flowed with Luke Halford closest to scoring when he was held up over the line as the half hour approached. Five minutes later James Craig went from hero to villain as he was penalised for a high tackle on wing Alex Garbett. S&E would have to endure ten minutes without their hooker. Despite some cussed defence by the Surrey men Banbury would not be denied. Recycling the ball quickly they broke through on the blindside and lock Louis Tooth strode over to score. Ed Phillips added the kick to lead 14-7 in time added on in the first period. There was no further score in the lengthy period of injury time. Sutton returned to their full compliment but James Craig remained on the sidelines with tactical substitute George London continuing whilst the sacrificial lamb, Austin Bell, returned to the fray.

The opening quarter of an hour of the second period saw both sides best play undermined by errors. Then the Oxfordshire team knocked on from a Sutton line out. From the scrum S&E went blind and Robbie Martey touched down to score on his debut. Bunting’s conversion drifted wide as the home team trailed 12-14. S&E were given a helping hand when the Bulls hooker Nick Agbo saw yellow for a deliberate knock on. Then another penalty gave Freddy Bunting the chance to take the lead and he obliged with a well struck kick for a slender 15-14 advantage with a dozen minutes to go. The lead lasted only seconds as Banbury playing their best rugby put together their phases and made the crucial line break to see winger Alex Garbett score. With Ed Phillips’ conversion bisecting the uprights the visitors had a 21-15 lead. A couple of minutes later Tommy Gray pounced on a knock on, scored his second try and the Bodicote Boys had secured a bonus point for a fourth try. Despite the missed conversion the rapid 12-point burst after they had momentarily trailed meant Banbury led 26-15 with five minutes remaining of normal time.

The Black & Whites needed an immediate response and they regathered the restart and forced a penalty. A few phases later and veteran Sam Hurley was through for the try. The conversion was added by Freddy Bunting and Sutton were within a score as they trailed 22-26. The Oxfordshire men pressed hard for the decisive score but stout Sutton resistance prevailed though at the cost of an injured Josh Glanville who was forced off the pitch. In a frenetic finale Luke Halford made a 30 metre break to raise the hopes of the S&E followers but the visitors’ line was not seriously threatened.

With no further addition to the score Banbury had earned their first points of the campaign and a win on the road. Sutton & Epsom were unfortunate to suffer early injuries to not only Stefan Cooksammy but also Alex Mount. However, it was their self-inflicted wounds that were their undoing in a contest that could have gone either way. Tommy Gray was the Man of the Match with a couple of tries in a performance that carried a constant threat. For the Black & Whites Robbie Martey rounded off an impressive debut with a try. It was a case of the curate’s egg for James Craig with a try and a yellow card to add to the now familiar strikes against the head. Freddy Bunting endorsed his growing reputation with fine place-kicking to add to his already considerable all around game.

Next Saturday, 17th September, will see the Black & Whites visit fellow Surrey club Camberley for the first time for a league fixture since January 2013. The hosts after an impressive opening day win over Wimbledon stumbled at the second Havant hurdle and will be keen to return to winning ways. The kick off will be 3pm at Watchetts Recreation Ground as Sutton & Epsom seek their first success of the season.