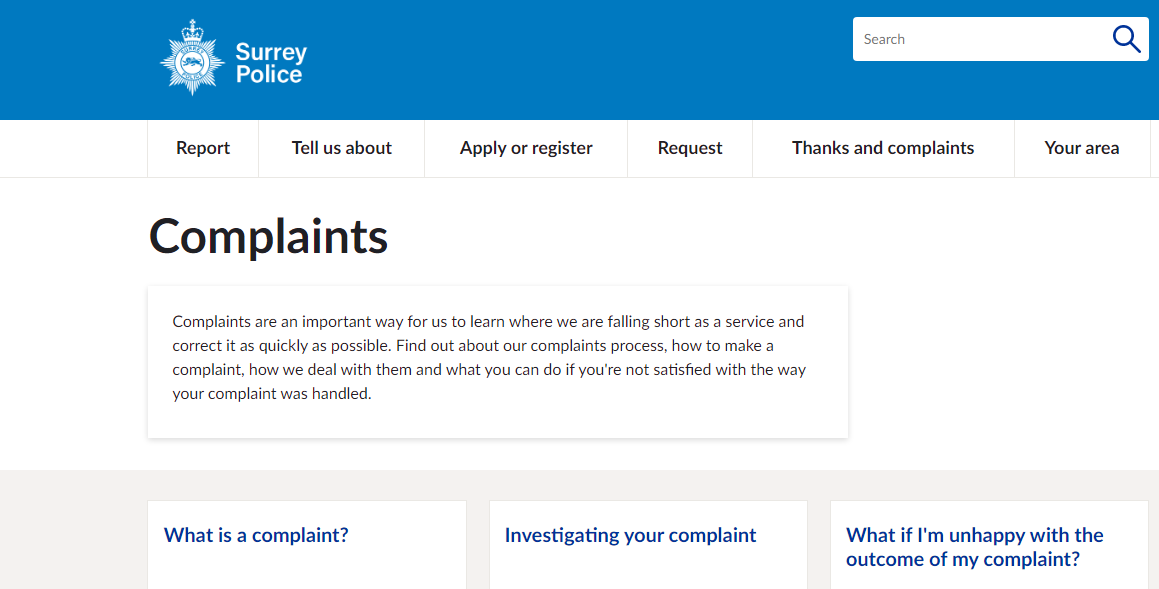 Surrey Police received more complaints per officer in its force than any other in England and Wales. The Home Office recently published the statistics for the year end 31st March 2022.

Epsom and Ewell Times has analysed the tables and the top forces are as follows:

Lisa Townsend, Police and Crime Commissioner for Surrey, said: “My office has been in detailed discussion with Surrey Police following the understandable concerns that the public may have following the national news this week. There is no place for misogyny or abuse of any type in Surrey Police and I have been clear with the Force that I have the highest expectations of our police officers.

“I am pleased that Surrey Police have rigorous processes in place to discourage all forms of behaviour that fall below the standards we have of every officer, and I am confident that all cases of misconduct are carried out with the utmost seriousness when an allegation is made either externally or internally. The latest quarterly data from the IOPC to last September shows a reduction in complaint cases against police officers in Surrey. However it is important to note that while every case is taken seriously, the total number of complaints received relates to a wide variety of themes. Many complaint cases are resolved to the satisfaction of the complainant.

“My office continues to play an important role in scrutinising the Force in all areas of performance, including regular meetings with Surrey Police’s Professional Standards Team and the IOPC. This includes identifying trends and working to improve the timeliness and quality of the service that every complaint receives.”

Helen Maguire Liberal Democrat PPC for Epsom and Ewell said: “As a former Royal Military Police Officer, it goes without saying that I fully support the difficult work that Surrey Police do. However, following the conviction of David Carrick, these Surrey figures will be seen locally as being very disturbing and so the public needs reassurance. Therefore Surrey Police Force must ask themselves why they are top of the table and how do they investigate internal complaints against their own police officers. That can only be achieved if there is external scrutiny of the figures – the public will not take kindly to seeing Surrey Police marking their own homework!”

Mark Todd, Chair of Epsom and Ewell Labour Party said: “In Epsom & Ewell we get a terrible deal on policing, so it’s no wonder that complaints are so high; and the huge problems at the Met show that the problems go wider still. During austerity the Conservative Government cut our police funding by 20% and Epsom’s police station was closed. It lies derelict on Church Street with just a small base during working hours at the town hall. We need a properly resourced, trained and managed police force and that’s what a Labour Government would provide. Currently our police force is not fit for purpose and it’s all the Government’s fault.”

Surrey Police have hit back: “The Home Office figures quoted by some outlets are for overall public complaints to the force. These capture dissatisfaction with the service provided by police. The figures do not reflect misconduct investigations. This is a really important distinction to make. “

Epsom and Ewell Times has extrapolated the figures above from the Home Office table: “Number of individuals (officers) subject to a complaint”. Readers may explore for themselves via this Home Office website page.