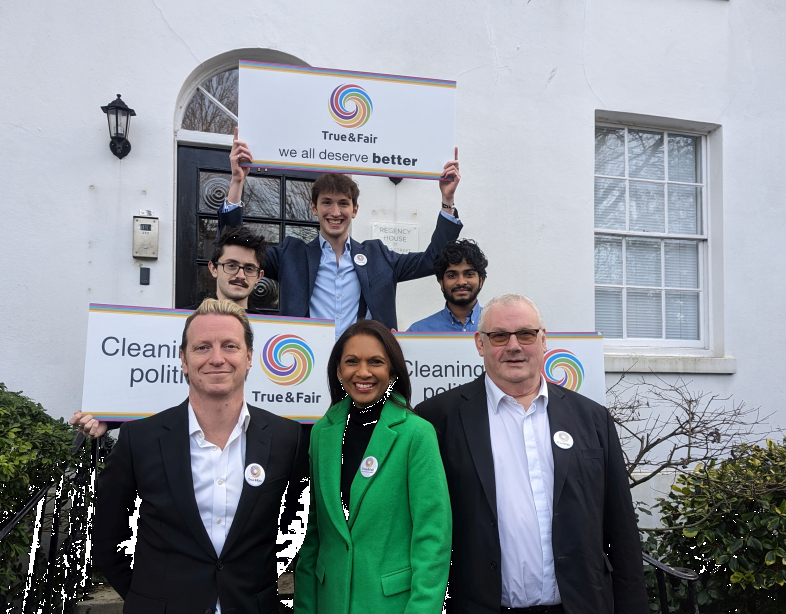 Epsom and Ewell opposition parties are united against the Parliamentary intervention of the “True and Fair Party”. Prospective parliamentary candidate Gina Miller opened her campaign office in Epsom and Ewell this week, promising to set up shadow MP surgeries to help residents struggling through the cost-of-living crisis. The office is based at Regency House, 17 West Street, just off Epsom High Street. In the coming weeks and months, Gina will hold shadow MP surgeries face-to-face and online, from the office and in locations across the constituency.

Gina famously defeated the Government twice in the Supreme Court when the Conservatives attempted to unlawfully override and then shut Parliament. Ministers’ disrespect of the law, entitled attitude and lack of care for the electorate led Gina to form True & Fair. The party campaigns against political corruption and highlights the lack of accountability in our system.

Gina, who is also Leader of the True & Fair Party, said: “In October, True & Fair announced its first slate of election candidates. They are standing in constituencies where traditional opposition parties have struggled to mount a serious challenge to the Conservative incumbent in recent elections. Epsom and Ewell voters can unite under my candidacy, which will be shaped by their aspirations and address their concerns.

“There was a net decline of 300 registered business – far above the national average – in Epsom and Ewell last year, according to the House of Commons Library. I urge any resident who is facing a problem, hardship or unfairness to visit our shadow MP surgeries so that my team and I can help them.”

Commenting on Gina Miller’s decision to stand for Parliament in Epsom and Ewell, Helen Maguire PPC for the Liberal Democratcs stated: “Realistically, we believe the Liberal Democrats are the only party who are able to take this Blue Wall seat from the Conservatives. The constituency of Epsom & Ewell needs an alternative to those who are bringing this country to its knees and so we have put together a committed team with new members joining all the time. The Liberal Democrats were runners up at the last election, but now believe we can close the gap given the Conservatives disastrous record in Government. The strength of our organisation, changes to the constituency’s boundaries, and a hard-working candidate, will enable us to ensure change for the better in this area.”

Mark Todd, Chair of Epsom and Ewell Labour Party stated: “I’m sorry to say that Gina Miller’s candidacy is likely to split the opposition vote and let the Conservative MP back in. It will do more damage than good. The local party Labour is currently forecast to win the seat at the next General Election. There is no need for her to intervene here. The local Labour party have 500 members and 3 councillors who actually live here. Our members volunteer at the local food bank, plant trees, are actively saving a local community centre, write the talking news, work in the local NHS and mental health services as well as in other local voluntary organisations. They’re out knocking doors every weekend and have been holding advice surgeries here for decades helping the local community. Gina Miller doesn’t live here, she advertises herself as living in London. For Gina, Epsom & Ewell is just a publicity stunt. For us, it’s our community and we’re determined to win it from Grayling at the next election”

Chris Grayling, MP for Epsom and Ewell runs regular surgeries for constituents. The Conservative Party’s website maybe out of date in stating: “These are currently held virtually due to the current COVID-19 restrictions (sic). If you are a constituent and would like to arrange a 15 minute appointment, please contact the Constituency Office on 01372 271036.”