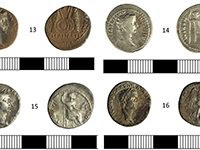 Over the last 20 years the British Museum’s Portable Antiquities Scheme (PAS) has allowed finds made by metal detectorists in Surrey to be added both to the national database and the county’s Historic Environment Record (HER). Any groups of coins, groups of prehistoric metal objects or individual precious metal objects over 300 years old have also been required to be reported to the Coroner under the 1996 Treasure Act. This reporting process is undertaken by the county’s Finds Liaison Officer (FLO). The purpose of the Treasure Act is to provide museums with the chance to save important finds before they are lost to commercial auctions and to preserve them for local communities and public collections. Finders and landowners receive full financial reward for everything acquired as part of this process.

One recent discovery from Surrey which has been reported under this law, is a hoard of 28 silver Roman coins (denarii), found dispersed across a small area of equestrian pasture in the Elstead area (recorded as SUR-EA4D41 and SUR-0E4DC2). The coins were most likely originally buried in a bag or box which has long decayed and released its contents to be scattered by ploughing. These coins represent an unusual and significant find for the county and after being declared Treasure at Coroner’s Inquest were acquired by Godalming Museum, with financial assistance from Surrey Archaeological Society, Council for British Archaeology South-East and the V&A Purchase Grant Fund

Images and text courtesy of the Surrey History Centre