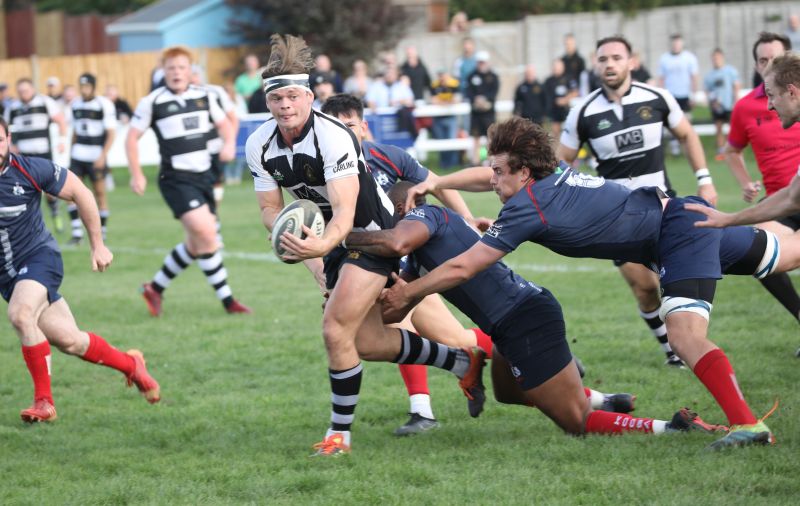 SUTTON & EPSOM 42 – BRIGHTON 24. Saturday 24th September. Rugby returned to Rugby Lane, Epsom on Saturday after a temporary weather induced hiatus. Brighton arrived on the back of a fabulous 39-38 triumph against Havant whereas S&E were still striving for their first victory of the campaign. The Black & Whites made a further eight changes to last week’s roster and gave a debut to Ollie Baptiste-Wilson. There was also a notable return for veteran Steve Munford who spends his days with the coaching unit on the touchline rather than engaged in the action. In a high-scoring and thoroughly entertaining affair Sutton won 42-24.

Bathed in glorious sunshine but with a stiff breeze Freddy Bunting set the ball in motion with S&E playing towards the clubhouse but Brighton having the elements in their favour. The opening exchanges set the tone for a match that was to be played at a high tempo with plenty of scoring opportunities. The hosts were the first to threaten as debutant Ollie Baptiste-Wilson was bundled into touch five shy. Moments later a superb sweeping counter set up the visitors in their opponents 22. A try in the corner looked a formality but the scrambling Black & White cover forced Aled Edwards to put a foot in touch as he grounded the ball. Sadly after 10 minutes Isaac Lea was forced off with a serious shoulder injury and was replaced by Ewan McTaggart who went into the second row as Ben Tame retreated to the flank. It was not long before the Blues were again pressing hard for the opening score. They declined a kickable penalty and opted to kick to the corner. Sterling S&E defence was capped by Rob Hegarty seizing on the loose ball enabling Ross Parsons to clear.

Not to be outdone the Black & Whites set out their stall in the Blues 22. The visitors’ defence was just as miserly as the hosts and was combined with a stunning counterattack. A spectacular score was only thwarted by the excellent cover by Munford and friends. As the first quarter concluded there was moment of controversy as Gareth O’Brien’s attempted interception 10m from his line was knocked on and all eyes fell on the referee. He gave a penalty to Brighton that was the least draconian outcome for the fortunate hosts. The familiar kick to the corner meant another 5m line out. To add to the Sussex men’s sense of injustice Sutton turned over the ball and cleared to touch. As the half hour approached S&E made probing breaks by Mount and Drye whilst a wonderful Sean O’Hagan kick sent Sutton scuttling back to their line.

Finally the try came and it was the hosts who opened their account. From a quickly taken free kick on the opposition 22 Ross Parsons set up the pack and despite heroic goal line defence Tom Boaden forced his was over near the uprights. Freddy Bunting added the simplest of conversions for 7-0 to Sutton. The south coast men were close to an immediate reply as a subtly placed restart away from the pack only just evaded the wing and nestled into touch. However, it was the Rugby Lane team who were next to score as Freddy Bunting thumped over a penalty from 45m to make it 10-0. The visitors redoubled their efforts to get on the board but swarming Sutton defence kept them at bay. As the interval approached Brighton must have thought the fates were against them as a fabulous clearance from their 22 rolled over the opposition dead ball line. From the Sutton and Epsom scrum back on the Brighton 22 it looked as if a set move had stalled badly but Archie Fitzgerald juggled the ball and weaved through prospective tacklers to score under the posts. Freddy Bunting concluded first half proceedings with the conversion for 17-0.

The scoreline flattered S&E but the Blues had created enough chances for the crowd to realise this match was by no means over as a contest. The comeback would have to be made against a strengthening wind and an early score was a priority for the visitors. The Sussex men did exactly what was required having won a penalty from the re-start they established the attacking platform in the 22 and after concerted pressure it went wide with winger Nesi Onwabile, with neat footwork, touching down. The conversion from the flank drifted wide but Brighton were on the scoreboard and trailing 5-17. The visitors’ tails were up and a fine Ciaran Mohr tackle stymied the next attack. Then came the turning point of the match. For all the world it looked like the visitors would score and be knocking on the door at 12-17 but the Surrey men turned over the ball deep in their 22. Declining the clearance kick Steve Munford threw a long pass out to Olli Baptiste- Wilson who did wonderfully well to sprint the length of the pitch to score. Freddie Bunting added the conversion for a 24-5 lead.

If that score had given Brighton the blues in contrast it filled the Black & Whites with confidence. Maintaining their fast and wide approach Ciaran Mohr cut back inside from his wing near halfway and superbly set the ball back after being tackled. Swiftly the ball was in Gareth O’Brien’s hands and he burst through a gap and headed for the posts before selflessly popping the ball to the supporting runner, Ross Parsons, to score under the posts. Another Freddie Bunting conversion made it 31-5 to a rampant Sutton who had secured the bonus point. Within five minutes Brighton had a second try as sustained pressure from their forwards saw flanker Nick de Brett squeeze in at the corner. A brilliant touchline conversion by Sean O’Hagan and it was 31-12. Moments later S&E had a penalty and the referee did not appreciate the quizzical nature of the offenders and advanced the kick by ten strides. Freddie Bunting thumped the ball over for 34-12.

As the game entered the final quarter an inch perfect 50/20 kick by Gareth O’Brien gave the hosts a line out on the opposition line. The catch and drive led to a penalty and the forwards inched their way towards the posts. Finally it was released to the backs and a set move was perfectly executed. Replacement Joe Lovatt, on for the veteran Munford, scored in the corner with his only touch of the game. Freddie Bunting’s conversion from touch missed by inches as Sutton stretched their advantage to 39-12. A victory might have been beyond the visitors but the 4-try bonus point was an achievable target and they threw everything at the Black & Whites in pursuit of that goal. In a pulsating finale Ollie Baptiste-Wilson was denied another stunning strike by a tap tackle. Not only was a try prevented but Sean O’Hagan set off on his own bouncing off tackles he broke into the Sutton half and roared into the 22 before passing to Nesi Onwabile for his second try. The creator O’Hagan nonchalantly drop kicked the conversion for 19-39.

In time added on Freddie Bunting endorsed his growing kicking reputation by hammering over a penalty from 50m to make it 42-19. There was time left for one last Brighton assault while Ross Parsons received a yellow card for time-wasting. Despite valiant defence the Blues made the extra man pay and replacement Giles Westgarth scored to earn Brighton the reward of a bonus point that was entirely warranted. The conversion drifted wide and the referee blew the final whistle and Sutton had prevailed 42-24.

This was a highly entertaining game of nine tries with thrills and spills throughout. Brighton were not at their best and were hampered by untimely errors but S&E deservedly won the contest. For the Blues it would have been harsh to have returned to Waterhall pointless and bonus point try reflected accurately on their attacking intent throughout.

After three defeats this was a most welcome upturn in fortunes for Sutton & Epsom. Gone was the lethargic and error-strewn opening that had undermined their last two attempts. This was a new high tempo S&E playing a mobile game and eager to give the ball to their back division. Ollie Baptiste-Wilson had a debut of dreams with the score that transformed the game. Gareth O’Brien led the backs astutely with the centre combination of Bunting and Fitzgerald being equally impressive in defence as well as attack. The forwards were superb with their tireless efforts relishing the open game, making vital turnovers and keeping the pressure on their opponents. Freddy Bunting’s boot, that garnered 17 points, maximised Sutton’s efforts.

October opens with a trip next Saturday to Chapel Gate for the match against Bournemouth. Sutton and Epsom were denied their inaugural league encounter here in 2020 due to the corona virus so it has been a much anticipated, if belated, match on the fixture list. The Black & Whites will hope that they will carry forward this fine performance into next week and gain their first win on the road this campaign.