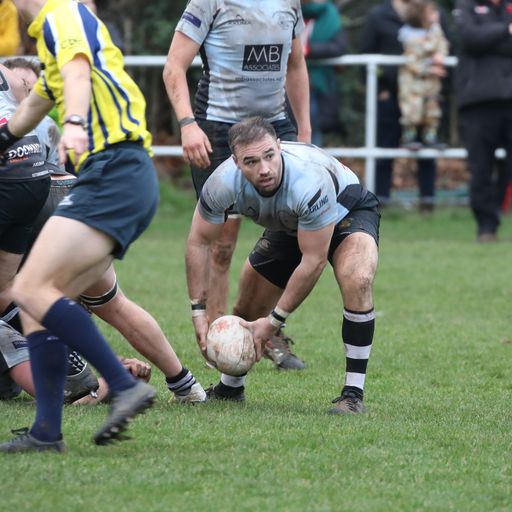 London Welsh 42 – Sutton & Epsom RFC 27 – Saturday 14th January. When these two sides met at Rugby Lane in October they produced an engrossing affair that ended honours even 15-15. Sutton and Epsom arrived at the famous Old Deer Park ground looking to build on the previous Saturday’s win against Bournemouth as they attempt to fight their way out of the relegation zone. The Exiles fielded a much-changed team from the earlier encounter and were able this time to field the formidable trio of Couzens, Bodinham and Cowdy.

After a feast of running rugby and eight tries London Welsh prevailed 42-27. Fortunately the torrential midday rain abated in time for the kick off. Sutton had only two changes in their starting XV as they welcomed back Ross Parsons and James Caddy. London Welsh kicked off and the hosts started at full throttle forcing their way into the visitors’ 22. They opened their account via the boot of Dafydd Manley for a 3-0 lead.

After one-way traffic for the opening ten minutes the Surrey men were awarded a penalty on their first incursion into the Welsh half. Though the kick was near halfway Freddy Bunting strode up and thumped over what was to be the first of his five penalties of the afternoon to level the score, 3-3. Parity did not last long. The marauding Number 8 Ben Davies passed to the towering Ed Couzens and Rhys Howells was on hand to add the finishing touches for the first try. Dafydd Manley’s conversion failed but London Welsh led 8-3 after fifteen minutes.

Sutton had enjoyed limited possession and precious little time in their opponent’s territory but took the lead in stunning style. After good work by the forwards Jamie Flatley was presented with the ball and with quicksilver footwork left the defence clutching at thin air to scamper in under the posts. Freddy Bunting did the necessary and Sutton and Epsom led by 10-8 at the end of the first quarter.

London Welsh did not trail for long. Scrum half Adam Nixon darted down the blindside to release Sion Cowdy whose perfectly timed pass put in Jacob Butler to restore the ODP team’s lead as Dafydd Manley added the extras for 15-10. Another Freddy Bunting penalty reduced Sutton’s deficit to 13-15. But minutes later it was the hosts who were awarded a penalty but they opted to kick it into the corner for the attacking line out. The pack controlled the ball and ushered captain James Buncle over the line for his first try this campaign. Dafydd Manley failed to add to the scoreboard as the Welsh led 20-13. Sutton and Epsom were still very much in the contest and with the prodigious Bunting adding another penalty with half time rapidly approaching the visitors were trailing 16-20.

The gloss was rubbed off Sutton and Epsom’s first period performance when scrum half Adam Nixon finished off an attack he initiated with a quick tap penalty. When Dafydd Manley’s conversion sailed between the posts Mr Michael Essam blew his whistle to end the first half with London Welsh 27-16 to the good. The Black & Whites started the second period well playing at a high tempo with excellent work from the forwards to set up camp in the host’s 22. Despite the control and pressure they were only able to add another Bunting penalty to trail 19-27. In their first sortie to the Sutton 22 the ODP team consoled themselves with a Dafydd Manley penalty for 30-19. Despite this score it was the visitors who were now in the ascendancy. The Sutton and Epsom pack hammered the Welsh defences with power and control as Ewan McTaggart advanced to the line.

The red wall held firm and hooker Gareth Lewis stole the ball to relieve the siege. After such a superb defensive effort London Welsh offered a lifeline to the visitors as Ben Bodinham received a yellow card. Sutton and Epsom and Epsom replacement Lawrence Elliott made an immediate impact with a surging break as Sutton and Epsom pressed hard to make their numerical superiority pay.

The visitors were playing their best rugby of the game but had to content themselves with another Freddy Bunting penalty. Trailing 22-30 with 15 minutes to go and a man up Sutton and Epsom were very much back in the contest. Hope springs eternal but misery can deflate spectators in seconds. From the restart Sutton and Epsom knocked on and from the scrum Tom Brooker was shown a yellow card and the game continued as a 14-man contest.

To compound the problems for Sutton and Epsom the Exile’s Number 8 Ben  Davies burrowed his way over from close-range to extend London Welsh’s lead to 35-22 with ten minutes remaining. Sutton had to get the next try but that honour went to the hosts and it was the best of their six. Sion Cowdy strode forward from halfway, chipped ahead and won the foot race as he regathered the ball he passed to supporting full back Tom Hunt who scored. Dafydd Manley added the conversion to make it 42-22 and end all hopes of a Sutton success.

Sutton and Epsom refused to retire meekly in the gathering gloom as the game entered time added on. Tom Brooker returned to the contest and made an instant impact as the Rugby Lane men went in search of a consolation. After pressure from the tireless pack had drawn the Welsh defences to their posts the ball was spun wide and a long ball floated pass reached Tom Brooker on the wing and he scored in the corner. That was the final score in a thoroughly entertaining contest with London Welsh earning a bonus point for a 42-27 victory. London Welsh scrum half Adam Nixon won the Devil’s Bridge Rum Man of the Match and he had been at the heart of the action throughout. London Welsh were worthy winners as they created more chances and secured six tries.

The kicking of Freddy Bunting kept Sutton and Epsom in the contest and if they had been more clinical they may have gained a bonus point or two. Sutton and Epsom certainly matched the hosts for phases of the match and played some exhilarating rugby but the try on the stroke of half time and the yellow card were critical blows from which they did not recover. Next Saturday sees the basement battle as Rugby Lane plays host to the Wiltshire All Blacks, Royal Wootton Bassett, who earned a very creditable bonus point at home against Havant as Sutton and Epsom toiled at ODP. Further afield Banbury’s 17-17 draw at Brighton was another result that was not welcome for the Black & Whites.

When Sutton & Epsom ventured to Ballards Ash earlier in the campaign they lost by the narrow margin of 31-29 as RWB celebrated their first win of the season. Sutton will need to turn the tables on Saturday and will hope a large and vocal crowd will gather at Rugby Lane for the 2pm start to cheer on the Black & Whites.

Go to https://www.suttonrugby.co.uk   for future fixtures.