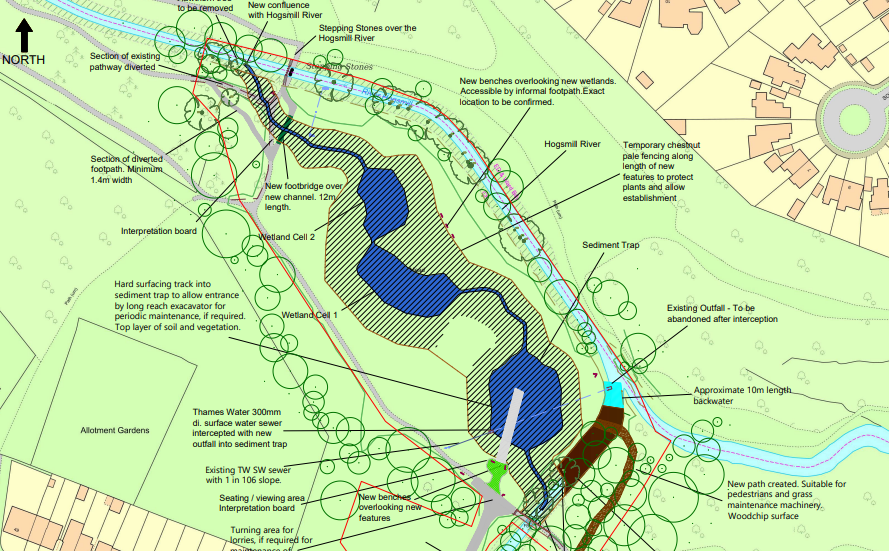 A plan to mitigate some of the environmental impacts of sewage on the Hogsmill River, in West Ewell, was finally approved by Epsom and Ewell Borough Council Thursday 21st July.

The scheme submitted by local charity South East Rivers Trust in May 2021, was granted by councillors after a 30-minute meeting of the Planning Committee, chaired by Cllr. Humphrey Reynolds (RA Ewell Ward). Cllr. Steven McCormick (RA Woodcote Ward) abstained from the vote.

The project will divert the Green Lanes Stream approximately 50m upstream from its current confluence with the Hogsmill River . The Stream will flow along a new winding channel through Chamber Mead meadow within the Hogsmill Local Nature Reserve, passing through a constructed sediment trap and wetlands, before entering back into the Hogsmill River approximately 200 metres further downstream from its original confluence. Up to 1,000 m2 of wetlands habitat will be created and the flow of the new channel will attenuate the sewage brought to the watercourse from road runoff, misconnections, and overflows from Epsom Storm Tanks.

“I hope it will become like the Garden of Eden,” said Cllr. David Gulland (Liberal Democrat College Ward) during the meeting.

In addition to the creation of the new channel, a 12-metre bridge was proposed to let pedestrians, including wheelchair users and cyclists, reach the stepping stones from the south of Chamber Mead.

”It’s a very welcome improvement to reducing and mitigating the impact of pollutants entering the chalk stream river and the discharges of sewage,” said Cllr. Kate Chinn (Labour Court Ward).

Pollution has long been a scourge for a river that is internationally recognised as one of the only 200 chalk streams on Earth, and its chemical concentrations even led the Environment Agency to issue a ‘fail’ status in 2017. Warning signs have been put up advising people not to attend the area.

After the application was submitted, 527 letters of notification were sent to neighbouring properties to advertise the plan. As of July 2022, more than 35 letters of support have been received. Nevertheless, one of the recipients manifested their objection, as pollution “should be addressed at source.”

Despite the worthy purposes of the plan and the actual benefits this could achieve, failures at Epsom and Manor Drive Storm Tanks, Hogsmill A Wastewater and Cso At St. James’s Road stewer storms – all managed by the private utility company Thames Water – appear to be the real problem.

In 2021, a total of 159 hours of untreated sewage contaminated the river across 47 incidents, according to data published by The Rivers Trust.

“We support the scheme to reduce the impact of some of the pollution, however it will only do this on a fraction of the pollution coming into the channel,” said Mark Todd, local entrepreneur and member of Epsom and Ewell Labour Party, whose petition asking the company to stop the pollution has recently topped a thousand signatures. “Thames Water must, must, must stop overflowing so much sewage deliberately into the streams for wildlife to survive and for the streams to be safe for kids.”

In a letter sent to the company and reviewed by Epsom and Ewell Times, the signatories of the petition demand that Thames Water upgrade their “inadequate infrastructure,” as “local residents and community groups are very concerned about what is going on and are very disappointed.”

Along with coliforms, raw sewage discharge from the sewage network is seen as one of the two “major issues to tackle,” according to a joint opinion piece from Professor Chris Whitty, Chief Medical Officer for England, Jonson Cox, Ofwat chair, and Emma Howard Boyd, Environment Agency chair, released in June 2022. “The principal public health responsibility for ensuring human faeces and viable human faecal bacteria do not get into waterways people might use recreationally, rest squarely with the water companies and their directors.”

A spokesperson from Thames Water, although acknowledging the risks of pollution, seemed to disagree. “We certainly can’t do it on our own,” they said.