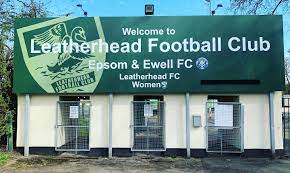 Epsom and Ewell FC 0-5 Leatherhead FC – Mid-Season Friendly – Saturday 21st January. An Epsom and Ewell team that hadn’t played a match for nearly three weeks came up against a Leatherhead side that had played fairly regularly during that period and in front of a crowd of 79, the score line of 5-0 to our opponents came as no real surprise.

With our League match against Arundel postponed, a friendly against our landlords on the artificial surface at River Lane, Fetcham was hastily arranged and kicking off at 2pm we gave a run out to our new signings Roan Strong, Musa Beegun and Rory Edwards while the majority of our regulars all played too, but for large parts of the game we found chances extremely limited. A change in formation just after the half hour made things a little more even for a while, but by then we were already two goals in arrears and three more followed in the second half.

The first goal came courtesy of a slight deflection, enabling the ball to creep past the wrong footed Strong in the 13th minute and a second followed after a great turn from the Leatherhead 10 which put him through to find the 9 with a good pass and he guided the ball past Strong into the bottom far corner.

The second half produced a slightly harsh score line for us as the Leatherhead keeper made three superb saves in the second half, two of which came from Nick Wilson, but to be fair, they also had other chances that weren’t taken and could have had a couple more themselves. The third goal came in the 49th minute and was harsh on Strong who made a good save, only to see an opponent reach the loose ball first for a simple finish. A spectacular fourth goal then followed in the 67th minute with a strike from the edge of the penalty area that grazed the bar on its way in. All we had in response was one near post shot from Athan Smith-Joseph after he had received a long kick from Strong, but the keeper kept it out.

We then had three chances in a minute; the 75th, as it turned out. Firstly, Wilson struck at goal with a slight deflection on the way, requiring a great full stretch save to claw the ball away. From the corner, Thomson Adeyemi’s header from point blank range was also kept out and the from the next corner Aaron Bogle struck over the bar from just inside the box.

A great deep cross from Athan Smith-Joseph was met by a superb volley from Wilson, but this was also acrobatically kept out by the Leatherhead keeper and an 86th minute penalty from Junior Kadi, after Bogle had brought a striker down just inside the area, completed the scoring. You couldn’t argue with the decision and seeing as the referee was our former Captain Alex McKay, it is only fair to say that he had an excellent game.

We now face another two weeks without a competitive match before hosting Oakwood, but this should give time for our new signings to become a little more familiar with the rest of the players as we finally commence the second half of our season against teams of not such a high standard.

Subs: Rory Edwards, Thomson Adeyemi, Musa Beegun, Josh Owen all on for Quintyne, Smith, Alder, Wilson (at HT) Lawrence O’Donoghue for Acheampong (62), Wilson back on for Byatt (69), Quintyne back on for Akoto (81)