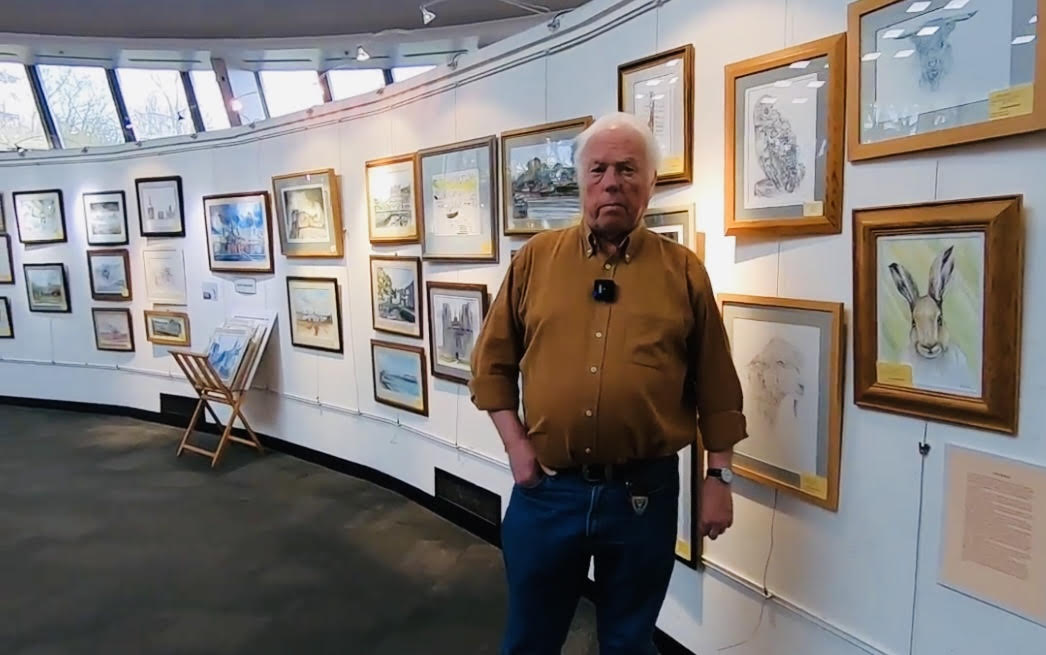 Ending Saturday 19th November your last chance to see selected works of the artist John Whurr at his solo exhibition in Bourne Hall Gallery. His work varies from pencil sketches of birds and animals to watercolour landscapes and detailed pen and wash of well known buildings in London and elsewhere. Also included is a large collection of portraits in ink and pencil – WG Grace is portrayed at Lords Cricket Ground – the pop artist Rod Stewart in his early days – groups of famous racing drivers and rugby plyers. His gift for depicting people is incredible. I particularly enjoyed the picture of the actor Leo Mckern playing the part of “Rumpole of The Bailey”. In this one off incredible exhibition, colour paintings of classic cars, motorbikes and railway trains demonstrate John’s wonderful skill in depicting shiny surfaces like metal and glass. Detailed pictures of buildings and cityscapes show his interest in architecture. A very modest and down to earth person – John has been awarded many accolades for his work but prefers to maintain a low profile.

John Whurr has always had an interest in drawing from an early age. He went to school in Carshalton and became chief draughtsman for Shell Coal and later worked for the BBC . He studied at Sutton Art College and spent time learning watercolour skills at the Epsom Further Education Centre. Over the years he has had several exhibitions alongside other artists at Bourne Hall and other places with many of his works going abroad from Australia to the USA and many European countries.

He was commissioned to provide five pictures for the cultural centre in Nagasaki, Japan. He loves sketching and his first love is architectural/coastal subjects but his interest in landscape will get him reaching for the paint palette. For many years his drawing has extended to caricatures and more recently portraits. John is a member of the Society of All Artists & The Molesey Art Society. He’s enjoyed being ‘artist in residence’ at the Brooklands Museum Weybridge.