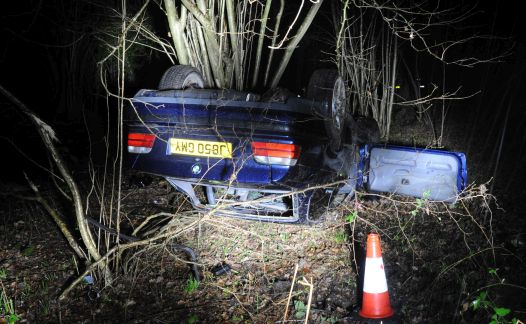 A Woodmansterne man is facing 2 years and 8 months behind bars after making a reckless decision to show off his car in front of his friends by driving at excessive speed which resulted in the tragic death of a 17-year-old girl.

Leanne Taylor, who was the back seat passenger at the time, was sadly killed in the collision which took place in Tupwood Scrubbs Road in Caterham on the evening of Saturday, 1 February 2020.

Describing Leanne as “definitely one of a kind with a massive individual personality”, her family said today that Leanne’s “lasting legacy is giving a gift of life to four people”.

Her mother, Mary Allison, said: “Over the last two years and nine months, we as a family have waited for justice for our Leanne. How I wish my Leanne was alive and had the chance to live life to the full, it’s heartbreaking. We would like to thank all the emergency services who were there on the night, to the staff at St George’s treating our Leanne with dignity and respect. A massive thank you to the team from the Surrey and Sussex Police Serious Collision Investigation Unit for all the work they have done to build this case, for justice for our Leanne. A big thank you to our family liaison officer and all involved.”

The driver of the car involved in the collision, Callum Hone, 24, of Manor Way, Woodmansterne, was sentenced to 2 years and 8 months’ imprisonment when he appeared at Guildford Crown Court yesterday (17 November). He has also been disqualified from driving for 5 years, which will start when released from prison and if he was ever to reapply for his driving licence there would be the requirement to complete an extended re-test.

Hone had pleaded guilty to causing death by dangerous driving on the first day of his trial at the same court on 10 October.

On the evening of the collision, Hone had picked Leanne and another friend up in his BMW 320 where they joined another group of friends at Caterham Viewpoint. They were sitting in their cars talking and listening to music when Hone made the fatal decision to do a drive-by. Hone set off, with Leanne and her friend still in the car, and was driving at speed when he failed to negotiate a left hand bend, resulting in the car colliding with a tree and overturning a number of times before landing on its roof.

Leanne’s body was recovered from under the BMW and she was taken to hospital, where she sadly died five days later as a result of the catastrophic injuries she had suffered in the crash.

On sentencing, Judge Black said: “I have no doubt you were showing off to your friend. You were fully aware of the risk driving the way that you did with at least one passenger unrestrained within the car”

Investigating Officer, Lauren Upton, from the Serious Collision Investigation Unit, said: “Our thoughts are with Leanne’s family and friends following her tragic and senseless death. I would like to thank Leanne’s family for their patience and dignity throughout this investigation. Hone was estimated to have been driving at a speed of between 55 and 60mph at the time of the crash, a speed that was unsuitable for the road conditions. Leanne’s death is a stark reminder of why all young drivers should think twice before they risk the lives of themselves and others by putting their foot down on the accelerator to show off and try to impress their friends. Sadly, this case is an example of the devastating consequences Hone’s reckless and irresponsible actions can have. Speed kills – it is simply not worth the risk. We will continue to investigate serious collisions and bring to justice those who compromise the safety of themselves and others on our roads in Surrey.’’