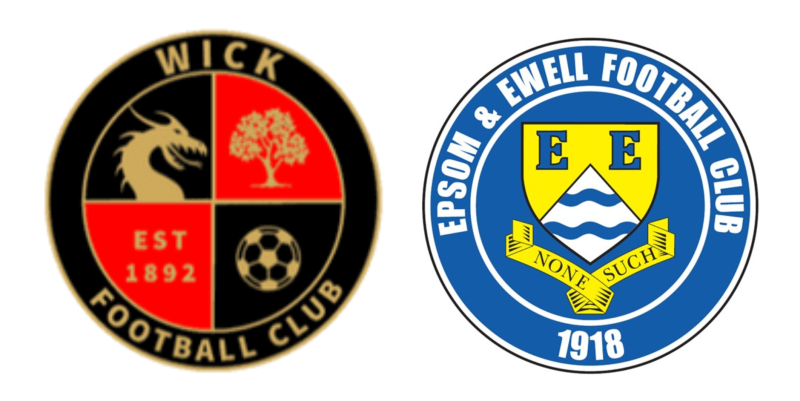 A goal towards the end of each half was sufficient for our boys to see off the challenge from second placed Wick at Crabtree Park on Saturday; a result which extends our lead at the top of the table to five points.

However, this result was more than just the win. Last Saturday we threw in an awful performance against Worthing United. So poor in fact that our football club chose to hide away from even releasing a report, although obviously there was still one on this site, as supporters will always be kept informed of what is going on here. In that report I wrote that if we were able to defeat Wick and Shoreham in our upcoming matches that we would be able to write off last week’s aberration as a freak result, and we are now half way towards being able to do just that.

Despite the substantial amount of rain in midweek, the pitch passed the inspection and looked in fairly good condition from pitch side. We took the field with two changes from the starting eleven against the Mavericks seven days previously; Johnny “Sonic” Akoto came in at right back with Gideon Acheampong moving across to cover the absent Aaron Bogle, who had only played 45 minutes of that Worthing United match before being replaced. Further forward Jaevon Dyer came in for Gavin Quintyne, but found himself out on the wing with Jamie Byatt playing down the middle. Additionally, we would have three new Salts in this match as Kevin Moreno-Gomez (Horley Town, Burgess Hill), Ben Bauchop (Farnham Town) and Oliver Thompson (Colliers Wood United) would all see action off the bench.

The opening exchanges were fairly even, with a slight ascendency in favour of the home team, although as the match progressed we began to hold a greater share of possession. Athan Smith-Joseph was giving a lot of trouble to the two defenders that were covering him, although the end product never found a team mate on this occasion. Balls in to the near post were cleared away by defenders, while deeper crosses just always seemed to elude Byatt in the middle.

Dyer was slightly quieter in the opening half, but actually appeared to carry more of a threat to goal when he had the ball. He was upended after quarter of an hour just outside the penalty area, and Ryan “Butch” Smith’s shot was well saved low to his right by Keelan Belcher. Byatt put Josh Owen through on goal with a clever ball, but the defender did well and forced him away from goal. Then Smith-Joseph sent a shot just over the bar after he cut in from the left. Just after the half hour a Wick clearance hit a team mate and rebounded kindly for Byatt, but he chose to pass instead of shooting and probably instantly regretted it as his ball was too far ahead of Owen.

However, it was apparent that we were the ones pushing more and more for the opening goal and it came in the only minute of first half injury time. Akoto got away down the right wing and he pulled the ball back to Dyer, standing around fifteen yards out. His shot went across Belcher but was blocked by a defender on the goal line, although Byatt was alert as ever and nipped in to force the loose ball into the net from around half a yard out before the defender could reach it.

This was a fair half time score and heading towards the evocatively named Condemned Tree end in the second half we continued to push. Dyer was brought down, leading to a bit of a scuffle, although nothing came of it. The home side sent a looping header wide of our goal from a deep free kick, but we were back on the attack soon after and Dyer beat a number of men as he ran across the edge of the Wick penalty area before striking a shot back across Belcher, which went just beyond the far post with Byatt steaming in and unable to reach it. The only thing that ended up in the net was the covering defender!

The game took a serious turn in the 62nd minute when Tommy Farr made a good run on the right for Wick, only to stumble over just outside the box. It looked comical when it happened, but it was soon apparent that he was in a lot of pain and the game stopped for ten minutes while Farr received treatment for an injured knee before being stretchered off. The home team advised after the match that it didn’t appear too serious, which was a relief to all.

The game restarted and was followed by the best chance of the match for the home team. They held some good possession down the right and as the ball came in, Aaron Tester appeared to almost flick at the ball with the outside of his foot from just inside the box and it cleared Kane Charles’ bar by inches.

Our first substitute Josh Alder replaced Byatt with ten minutes of official normal time to play, although due to the earlier injury it would become almost twenty-five. The match then saw a solid challenge from Brad Peters that Johan Van Driel reacted to and he got up and pushed Peters over from behind. However, the ball was up at the other end of the field by then and none of the officials saw it conclusively. The referee chose to award just the yellow card, which was probably the correct decision, although we have certainly seen red cards issued before for similar infringements.

A few minutes later Wick tried a long range dipping shot that cleared our crossbar by inches, rippling the net as it landed and convincing a few excited supporters that their team had equalised. In response Alder broke through on the left but his shot was well kept out by Belcher’s leg. However, he would get a second opportunity in the 96th minute as Wick pushed up and Zach Powell’s long clearance cleared the defenders on the half way line and Alder was through again. This time he ran in and finished clinically with a low shot across Belcher which just clipped a glove, but still nestled in the far corner for our second goal.

Both teams had a final chance as the time ticked down. Dyer was denied in the act of shooting by a superb block challenge from Harry Williams, while at the other end Dave Crouch tried his luck from distance, but Charles was able to tip the ball onto the post and away for a corner that ultimately came to nothing. Finally, after around fifteen minutes of injury time the whistle blew to confirm that all three points were Epsom bound.

Overall, this was a vastly improved performance on the previous one. Instead of a porous defence that looked like it might concede to Worthing United at regular intervals, we kept Wick at arm’s length for much of the match and restricted them mostly to long range efforts. Up front we created more opportunities, while in midfield we took charge of the match, which was something we had struggled to do in our previous contest. The only black mark on the day was a rather harsh booking for Nick Wilson who will now miss the important Shoreham match on Saturday through suspension. I’m not sure why the club chose to put this information in the public domain, but if we play as well next week as we did in this match, it shouldn’t make any difference as we have decent strength in depth across the squad.