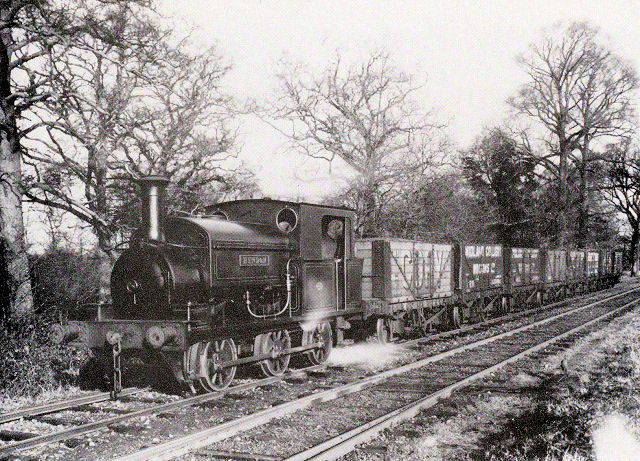 Having been closed down and dismantled just four years before my birth, the Horton Light Railway always held a certain fascination, for me when growing up in the area, and I often wondered what it would have been like to see the old steam engines going back and forth.

Up to its demise, there had been five engines running on the line, Hollymoor (1905-1908), Engine No 947 (1905-1909), Crossness (1913-1935), Hendon (1935-1947) and Sherwood (1947-1950). Parts of the latter, Sherwood, were still scattered around the area known as ‘Central Station’ (now David Lloyd Sports Centre), and the ‘Powerhouse’ where the Epsom Cluster hospitals generated their own electricity (before the National Grid) and steam for heating and hot water for the hospitals. Hollymoor, of course, lives on, in name at least, in the road Hollymoor Lane.

The railway was originally built to supply the materials needed for the building of what became the ‘Epsom Cluster’ of five mental health institutions in the early 1900s. It made sense for the railway to remain in use post-construction to deliver supplies to the Cluster.

I grew up close to the shunting yard by Ewell West Station where the area was once shared with an orchard. This became the County Highways Depot, and later Highway House, which eventually gave way to a housing development.

The original track bed, shunting branch, ran alongside the existing railway line away from the station, nearly reaching the stile at the end of West Street, replaced by the footbridge which remains today in the early 1960s. From there it swept round to follow a parallel course with Chessington Road, almost immediately finding its first obstacle, a feeder stream for the River Hogsmill, where a concrete bridge was built to accommodate. The bridge was removed in more recent years, though I could never understand why.

Once over the stream, the route followed between what is now, Hollymoor Lane, named after one of the locomotives used on the line, and a few houses built on Chessington Road and then reaching Baker’s Field running along its outer, sewage farm, edge and through a short avenue of mature elm trees, sadly long gone.

From there it crossed into what is now Hook Road Arena, passing the ends of Oakdale Road and then Richards Field, where a footbridge on the original route of the ‘Bridle Path’ crossed over the line, and then carried on behind the shops and what is now West Ewell Social Club, still running parallel with Chessington Road until it met its next obstacle, Hook Road (known as Kingston Lane at that time), where a tunnel was formed as, the road by then was becoming a busy thoroughfare.

The original bridge is still there and intact, left in position after Hook Road was re-routed. Though filled in, done when the track was removed, it can be viewed in the Horton Golf Club car park.

From Hook Road, the line carried on, into what is now Horton Country Park, unhindered and into Butcher’s Wood, where a branch line took it right into Long Grove Hospital. Then onto Four Acre Wood where, another branch took the line off to feed what was called ‘Central Station’, before it finally went on to West Park Hospital.

As the railway passed through Horton Country Park there were three footbridges, originally level crossings but, due to an accident in its infancy, a local woman Mary Tobin was killed owing to, what was deemed, neglect. The first between Butcher’s Wood and Four Acre Wood, one on the branch to Central Station and the last just before the line entered West Park. They had been erected on Rights of Way footpaths cutting through farmland that was attached to the hospitals. Here they were able to access fresh dairy, vegetables, and fruit from the orchards when in season.

There can be few people remaining in the borough that can remember seeing the railway and its engines in all their working glory, but if any readers have any memories or indeed pictures, we would love to hear from you.