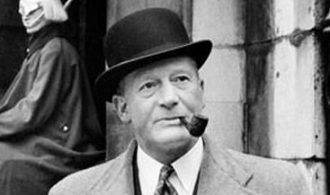 From 1972 until his death in 1978 Robert Fabian lived out a quiet retirement at 40 Fairfax Avenue in East Ewell. Twenty years earlier he had been the most famous policeman in the country known to the television watching public as Fabian of the Yard. He was TV’s first celebrity policeman and the aforementioned programme, based around his real-life cases and where he was played by actor Bruce Seton, preceded even the long-running Dixon of Dock Green.

Robert Honey Fabian was born at 25a Malyons Road in Ladywell, Lewisham in 1901. He joined the police force in 1922 and worked his way through the ranks, eventually joining the fabled Murder Squad. Not only did Fabian and his colleagues investigate killings in the capital but they were often, famously, called in to baffling cases up and down the country. One such murder was that of Charles Walton who was found slaughtered with a pitchfork through his neck in the village of Lower Quinton in Warwickshire in 1945. Fabian was unable to apprehend the murderer, but the case has fascinated ever since due to rumours of ritual killing, witchcraft and Satanism.

Fabian enjoyed his second career in the new media of television and appeared at the end of each episode of Fabian of the Yard as himself, explaining what happened to the criminal that had just been featured. Many were hanged. He became a household name and face and in 1956 guested on radio’s Desert Island Discs. One current older resident of Fairfax Avenue remembers Robert Fabian well and told me how the residents all felt reassured that Scotland Yard’s most famous detective lived in their street.