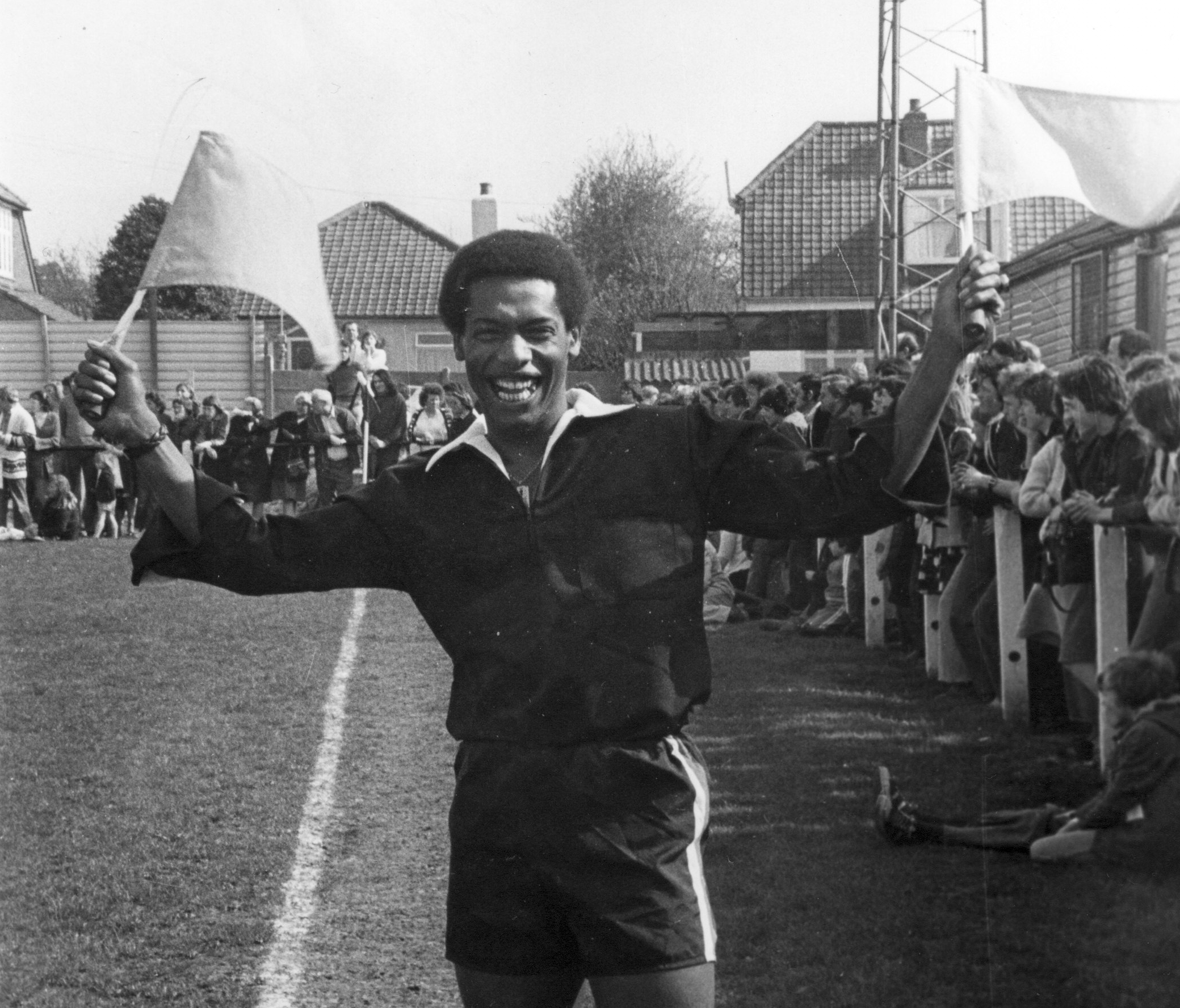 Richard Lambert pays homage to the late great footballer who played for Epsom and Ewell FC.

[Photo: Phil Walker pictured running the line at West Street on 24th October 1976 in a Charity Match as a Dennis Waterman XI defeated an Epsom XI 11-10 with the recently deceased Waterman scoring a hat-trick. Over 2,000 were present along with many other famous names like Alan Mullery, Dave Sexton, Tony Gubba and Trevor Lee.]

On Friday 8th July 2022 our club lost one of its most famous names when the death was announced of Philip Leonardus Walker at the tragically young age of 67.

Phil was born in Parsons Green on 29th August 1954 and went to Battersea County School in Culvert Road, Battersea where he met another youngster, Trevor Lee. Their stories would of course become inextricably linked, although had Phil been born three days later, he would have been in a different school year and their paths may not have even crossed!

Both of course connected well at a time when it must have been extremely difficult growing up as a young black man in South London, but the pair would become footballing pioneers in arguably the most hostile of environments, the Den; home of Millwall FC.

Although both were very good at football, they went in opposite directions at first. Phil was working in a factory in Acton and got talking to a workmate who was at Wingate F.C. so he went and played with them, scored in his first match and stayed a while.

However, in 1973 he teamed up with Trevor again at Cobham alongside another player in Steve Jones. All three would then sign for Epsom and Ewell in the summer of 1974.

Our club were of course just picking themselves up after years in the doldrums and had just finished as runners-up in the Surrey Senior League, but Manager Pat O’Connell; a former professional himself at Fulham, wanted our club to achieve much more.

Phil joined our club a month after Trevor, due to a holiday in America, and made his debut on Saturday 7th September 1974 when we defeated Chobham 3-0 in a Surrey Senior League Cup tie at West Street, but it was a slow start for the new lad who only made four first team appearances by the December. However, he forced his way into the team as the season progressed and by the end of May we had won the League and Charity Cup double with Phil firmly entrenched in the number 10 shirt.

Phil scores our only goal in the F.A. Vase win over Hornchurch on 8th February 1975

Johnny Eales is the other Epsom player in the photograph and to my knowledge is the only other member of the 12 man squad to have passed away as I write this.

Of course most supporters will remember that 1974/75 season for our run to Wembley Stadium in the very first FA Vase competition, where Phil was a focal part of the run. He scored the only goal in our Quarter-Final victory over Hornchurch and the winner against Stamford in the first leg of the Semi-Final, which was won 2-1 and essentially earned the trip to Wembley, following our goalless draw in the second leg.

Trevor Lee and Phil Walker share a moment at the F.A. Vase Final post-match get together at the Cavalier in Wallington on 19th April 1975 with Manager Pat O’Connell and his Assistant Arthur Evans

Although the day at Wembley ended with a 2-1 defeat, our club was on the football map again and in the early part of 1975/76 Millwall Manager Gordon Jago came calling. The new man in charge already knew of our club and ground, having played against us in the early fifties as Captain of Maidstone United in the Corinthian League. Jago actually took four of our players for trials at Cold Blow Lane. Willie Bennett, one of our finest defenders in club history, and Tommy Tuite, who would become our greatest ever goal scorer were also asked to attend along with Trevor and Phil, but ultimately injury hurt Bennett’s chances, while Tuite was considered too small at five feet eight, ironically the same height as Kevin Keegan! Both played matches for Millwall in the Football Combination, before returning to leafy Ewell Village.

However, Trevor and Phil were successful and Phil made the last of his 41 appearances for us against Southall and Ealing Borough (who had another non-league success playing in their team by the name of Alan Devonshire) in an F.A. Cup replay. Phil scored 19 goals in that time. Trevor would return for five appearances in 1985/86, but Phil would never wear our colours again.

Both players were due to sign for Millwall on 13th November 1975 live on the main regional news show of day, The Today show; a programme that would become infamous just over a year later for an interview featuring the Sex Pistols, but back then it was very popular. However, only Trevor made the show as Phil had to have x-rays but he would soon sign a two year contract in December 1975. Both made an instant impact on their debut, with Trevor setting up Phil to score the only goal against Mansfield Town at the Cold Blow Lane end at the old Den, and Phil made 35 appearances that season as promotion to Division Three was achieved.

Despite the obvious fact that they were the only black players in the Lions team at a sad time in our distant past when the National Front were regularly acknowledged on television as the fourth main political party, and even before the implementation of the Race Relations Act in 1976 (which expanded on the previous Acts from 1965 and 1968 and properly started to give some real teeth to the subject of discrimination) they became extremely popular at a ground where the word “hostile” was a tag that many of their supporters embellished as a badge of honour. They remain so to this day.

Both players became pioneers for their club, although Phil didn’t stay that long. He made 167 appearances for them, with 22 goals before moving on. Whilst there he was honoured for his contributions to sport by the Muhammad Ali Scheme in Brixton, along with Olympic Champion Daley Thompson and World Champion Boxer John Conteh.

To give full details of Phil’s professional career and achievements, it is much better to refer you to the clubs for whom he played from this point, as they will all have written their own tributes. Suffice to say though, he signed for Charlton Athletic for £120,000 in the summer of 1979 before having a loan spell at Gillingham.

He then made an unusual career move in those days by going abroad in 1983 when he moved to Hong Kong to play for Eastern AA before moving again, this time to Portugal where he joined Leixoes, Boavista and FC Maia before retiring at the age of 41. He also told me that the best ground he ever played at (excluding Epsom’s appearance at Wembley Stadium) was Benfica’s old Stadium of Light.

He also did some coaching at Maia in the early 2000s and this was put to good use in recent years when he started to run his own soccer school at Wandle Recreation Centre in Mapleton Road, Wandsworth which continues to this day.

Most people will not know that Phil was actually a member of a very talented family and had a couple of brothers; Dennis who also played regularly for Epsom and Ewell, making 102 appearances and scoring 12 goals, and Larrington (Larry) who was a very well-known actor with roles in Minder, The Bill, Inspector Morse and The Chinese Detective amongst others, yet was versatile enough to also be a member of the Royal Shakespeare Company and was a good friend of comedian Lenny Henry. Also, his nephew Kyle Walker-Peters is of course currently a professional footballer with Southampton.

I was extremely fortunate to meet both Phil and Trevor in 2015 when I noticed that Phil had started following our club on Twitter and dropped him a line to see if he would like to have a chat and he was more than happy to meet up and would bring Trevor along too.

When we met that evening I found two extremely modest people who knew they were breaking down barriers and raising the public’s perception at a time when it desperately needed to be, but you got the impression that they saw themselves as simply footballers. I didn’t feel the need to ask them the same questions they must have heard hundreds of times about their race, and in all honesty, I’d have probably been able to find out those answers from many other previous interviews. I wanted to concentrate on their time at Epsom and Ewell and I think it must have been quite refreshing for them to answer some different questions. In more recent years the Achtung Millwall podcast interviewed Phil and whilst it obviously concentrates more on his time there, it is well worth a listen too.

I said my goodbyes that evening and they said they would try to get along to an Epsom game one day. Regrettably now Phil will never make that journey, but he will never be forgotten at this club while I am here to pass the baton and remind people of our former greats, of which Phil was certainly one!

Trevor Lee and Phil Walker in the summer of 2015

More coverage of our great Epsom and Ewell Football Club on their website http://www.eefconline.co.uk/