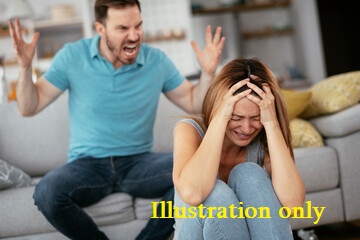 The powerful testimony of a woman who was subjected to years of coercive controlling behaviour has resulted in a man being handed an eight-year restraining order against her at Guildford Crown Court on 19 December.

Image – is purely for illustration. Neither the defendant or victim are represented.

The court heard how Douglas Martin, 42, of Winkfield Lane in Windsor, would intimidate and bully her so often as their relationship progressed that she has been left with acute anxiety and Post Traumatic Stress Disorder.
Over a period of around three years, Martin would control where she could go, who she could be friends with and what belongings she was allowed to have, throwing away items he believed were not acceptable in their shared home.

Chores had to be done to a standard he would accept and he would become verbally abusive when things weren’t done his way. The jury saw evidence of the extent of Martin’s controlling behaviour after they were shown a photo of a Christmas tree she was made to decorate in the garden because he wouldn’t allow her to have decorations inside the home. In addition, the court was played recordings of Martin’s relentless berating and aggressive verbal abuse, used to belittle, exert control and a sense of superiority.

Martin was given an 18-month custodial sentence, suspended for 18 months, after the jury found him guilty of coercive controlling behaviour. He was also ordered to attend rehabilitation programmes, including a course on how to build healthy relationships.

In an impact statement, she relayed how constantly living in fear made her feel physically ill with heart palpations and nausea. Speaking after the trial, she said: “Coercive controlling behaviour is happening to so many people who don’t realise they are experiencing domestic abuse. I want those people to read what I have been through, recognise similarities in their own relationships and understand that it is not a situation they simply have to endure. They can find the strength to say enough is enough and trust in the fact that there is help, support and justice out there.”

Investigating Officer Natalie Ridley said: “Today’s result is testament to the courage of the victim in coming forward, disclosing the abuse and giving evidence in court, which is ultimately what secured Martin’s conviction.
If someone is continually behaving in an abusive way towards you which controls how you live any aspect of your life, that is coercive control. You do not have to suffer alone or in silence. We have specialist support in place to help you and will do everything possible to pursue offenders and hold them to account for their appalling actions.”

Some of the signs of coercive controlling behaviour include:

You can find more information on how to report domestic abuse, including coercive controlling behaviour, and details of support organisations here.