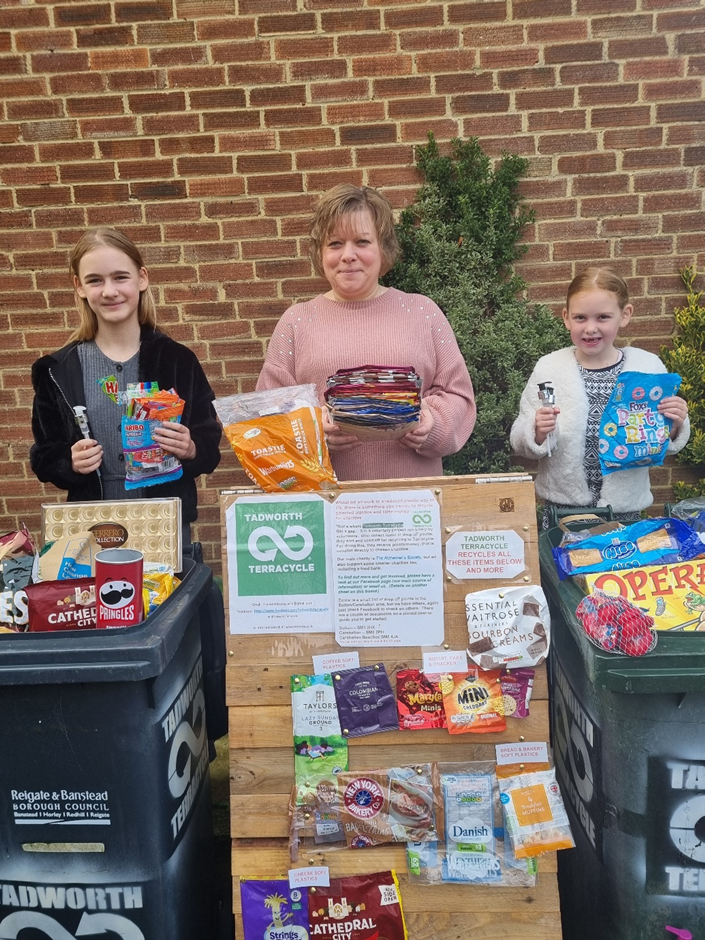 A group of environmental volunteers in Surrey is helping support its local community by recycling items that the council cannot accept through their kerbside recycling bin collections.

Catherine Banks, Founder of Tadworth TerraCycle, has signed up to a number of free recycling programmes offered by TerraCycle, collecting items including cheese packaging, Baylis & Harding products and packaging, and biscuit and snack wrappers that would ordinarily be destined for landfill or incineration. For each item of waste the group sends to TerraCycle, they are awarded with a monetary donation to the charities of their choice.

Pictured: Catherine Banks from Tadworth TerraCycle with two young volunteers and some of the items they have collected so far

The group has been raising money for charity since 2019 but recently its members have been prompted to donate funds to Epsom and Ewell Foodbank where they will be used for purchasing and sorting food and distributing it to those who need it most. More than £300 has been raised for the foodbank so far by collecting waste from the community via a public drop-off location in Tadworth.

The Trussel Trust reported that deliveries of aid parcels were up 14 percent compared with pre-pandemic levels, amounting to more than 2.1m parcels in the year to April 2022, and with the growing cost of living crisis facing the UK, this number is likely to increase in the coming months.

Catherine explained: “We initially signed up to the TerraCycle programmes as a way to inspire the children at the local primary schools. By teaching them the importance of recycling and taking care of the environment at a young age we can ensure that the Earth will be in safe hands with future generations.

“One of the schools we work with decided they would like to support the food bank and unsurprisingly all the other schools agreed it was a good idea. The cost of living crisis is affecting so many people and giving to the foodbank is the best way to help those most in need.”

As well as the foodbank, the group also donates to other good causes including funding books for local schools and donating litter picking equipment to the local community group, and in the last 6 months more than £1,000 has been donated to the Dementia Society.

Catherine continued “This really is a worthy cause so we encourage the entire community to get involved and drop these items at Tadworth Terracycle, 36 Bidhams Crescent, Tadworth. The more we recycle together, the more money we can raise for those who need it.”

The items the group sends to TerraCycle are recycled by shredding, cleaning and turning into plastic pellets which can then be used by manufacturers to create new plastic products such as outdoor equipment – reducing the need to extract new resources from the planet.