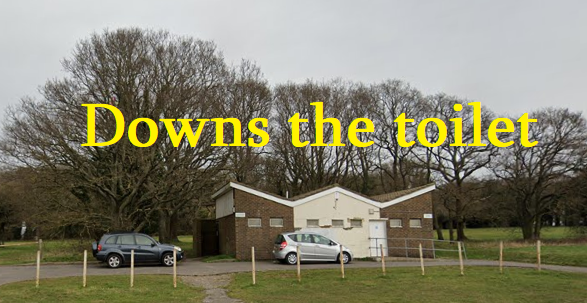 Following the demise of the public toilets on the B290 up on Epsom Downs, The Epsom and Ewell Times reports on the current Council provision of conveniences for the public:

In answer to The Epsom and Ewell Times, The Epsom and Ewell Borough Council provided the following information on the costs of spending a penny of those public toilets that are NOT part of a building used for other purposes (e.g., The Town Hall and Bourne Hall etc). To be clear – they are free to use! It won’t cost you a penny except through your Council tax.

Contrary to myth a person not patronising a pub does not have a right to use its toilet. London promotes a “Community Toilet Scheme” that encourages businesses to allow non-customers to use their toilets. London’s Railways stations take part. In the Borough of Epsom and Ewell the Ashley Centre would be hard pressed to prevent a member of the public having no intention to spend a penny in its shops from spending a penny in its toilets.

Should Epsom and Ewell have a Community Toilet Scheme? Write to us.