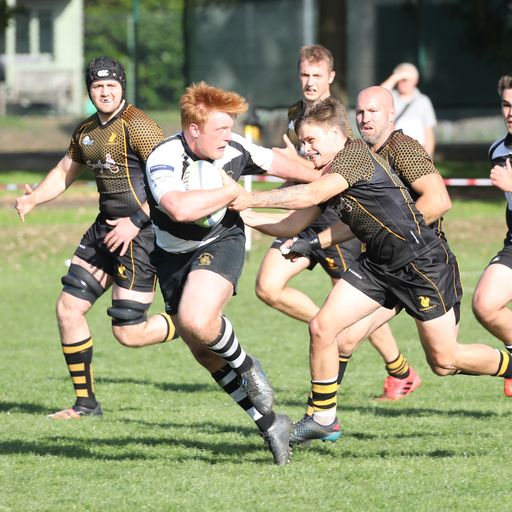 Sutton & Epsom had not played a league fixture at Watchetts Recreation Ground since January 2013. They renewed acquaintances with their Surrey rivals on a sunny but chill afternoon. On Saturday Camberley, promoted as London One South champions, were smarting from their first defeat in 11 months at Havant and Sutton and Epsom were still seeking their first win of the season. It was normal service resumed for the hosts with a 43-21 success whilst the wait for a win goes on for the Rugby Lane team.

Sutton and Epsom fielded two debutants Tom Brooker and Archie Fitzgerald. Five minutes before the start the visitors suffered a hiatus as Kyren Ghumra withdrew injured. A hasty reshuffle brought Austen Bell off the bench to 15, Sam Hurley moved to the wing and Ciaran Mohr stepped off the 2nd XV paddock to catch a breather on the bench. Camberley kicked off and the Rugby Lane team dropped the ball near their 22 to concede the set piece. From the scrum the ball went to the left wing, Josua Lewanituva, who strolled over to score. It was the start of a spectacular afternoon for the Fijian flyer that would garner four tries. Liam Prescott added the extras for a 7-0 lead. After a series of infringements the totemic Fijian crashed over by the uprights from a 5-metre ball for his second. Liam Prescott completed the scoring to extend the host’s lead to 14 points in as many minutes.

From the restart Sutton and Epsom showed more resolve. A fine line out catch and drive and sweeping movement demonstrated that the S&E machine was up and running. However, on the half hour Josua Lewanituva completed his hat trick with a magnificent 40 metre run weaving through the defence and swatting aside prospective tacklers. Liam Prescott’s conversion made the score 21-0. Sutton an Epsom’s despondency was short-lived as a superbly controlled advance by the forwards was rounded of by George London touching down.

Freddie Bunting bisected the uprights as Sutton and Epsom trailed 7-21. Sadly the try-scorer was to depart moments later with an ankle injury to be replaced by Dan Jones. There was no further addition to the score before the interval but there was no masking the size of the task facing S&E in the second period. As the teams turned around Sutton and Epsom at least they had the benefit of the slope as they re-started the match playing towards the clubhouse with Will Lloyd replacing Tom Boaden in the front row. The second half started in a depressingly familiar fashion as poor tackling resulted in full back Vic Hardwicke touching down for the bonus point try for Camberley. The excellent Liam Prescott touchline conversion made it 28-7. The fear of a rout soon became the hope for a memorable win. Sutton and Epsom stormed back playing their best rugby forcing the Watchetts men into defensive duties. George Drye was the first to score for S&E after Charlie Aylward had done well to keep the attack alive and Luke Halford had come close. Freddie Bunting’s conversion made in 14-28. Five minutes later a sumptuous break by Freddie Bunting created a score for the supporting Ross Parsons. As Bunting added the extras for 21-28 the game was in the balance with 15 minutes to go. Sadly a minute later Tom Brooker was contentiously yellow carded for breaking his binding.

With the extra man Camberley reasserted their authority and control. Prop Joshua Thundercliffe scored from a catch and drive. Liam Prescott added the extras as well as a penalty five minutes later for a telling 38-21 lead. Returned to fifteen men the Black & Whites went in search of their fourth try in an attempt to record a bonus point. Trying to counter from their 22 in time added on Sutton and Epsom lost possession. The ball was spun wide for the hirsute winger to fittingly conclude the match with his fourth try. Liam Prescott erred for the only time and the match ended with Camberley 43-21 victors.

Camberley deserved the win as they ruthlessly capitalised on a woefully slow and error-strewn start by Sutton and Epsom. Their powerful pack dominated the scrummage. The experienced Liam Prescott calmly orchestrated his back division and kicked 13 points. Man of the match Josua Lewanituva enjoyed a memorable afternoon that included a hat trick in the first half hour and four tries in total. The step up from level 6 to level 5 may well be slightly mitigated by the restructuring but the early season form of Camberley suggests that they will be a force to be reckoned with this season.

Great credit must go to the Black & Whites for a rousing display of immense character in the second period. Unfortunately the comeback was deflated by a yellow card moments after their third goal which scuppered an enthralling finale. Tom Brooker was prominent throughout and his powerful ball carrying will be of great benefit to S&E this season. Fellow debutant Archie Fitzgerald put in several jarring tackles and did not look out of place in 1 st XV company. Dan Jones added energy off the bench in the revitalised second half. Jamie See and Freddy Bunting combined to make impressive breaks as the Rugby Lane men rallied and hinted at a memorable success.

The campaign continues with the visit of Brighton next Saturday, 24th September, and the Black & Whites will be hoping for a repeat of last season’s 24-12 triumph. However, the Blues enjoyed a thrilling 39-38 over the previously unbeaten Havant in Week 3 and will travel to Sutton and Epsom full of confidence. I am delighted to report that rugby returns to Rugby Lane, after the brief Cobham interlude, and the kick off will be 3pm at the familiar location.