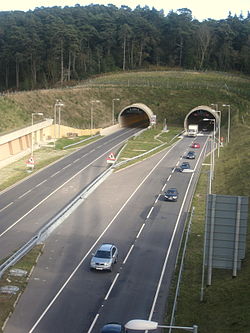 Guildford’s MP says it is time to tunnel the A3 under Guildford to help with traffic. Angela Richardson said “short-term sticking plasters” were not enough to help with the pollution outside the town, claiming the road is the most polluted in the strategic road network.

Speaking at Prime Minister’s Questions on Wednesday (December 14) the Conservative MP said it was time to “think big”, following the green light being given to the Solent free port this month. The development could lead to more traffic on the A3, with Ms Richardson highlighting the point where it narrows through Guildford as very polluted. She said “short-term sticking plasters” like nine-metre high air pollution barriers would further entrench divisions in Guildford and were not acceptable to her or to her constituents.

The MP said: “It is time to think big, it’s time to think long term. It’s time to tunnel the A3 under Guildford.”
In response, the Prime Minister thanked the MP for her question, recognising it was an issue she had “long-championed”. He said National Highways were “developing a range of solutions” for the A3 through Guildford and that the Department for Transport would consider the case.

Guildford councillors have been considering a congestion charge as one way to reduce traffic and pollution in the town, which is due to see major redevelopment in the coming years.

It has been met with concerns it could impact on businesses in the town and “discriminate” against those who can’t afford to upgrade their cars.