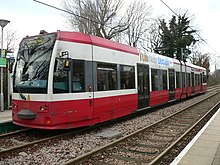 Trams into Surrey have been raised as one “very possible solution” to improving public transport with the expansion of the capital’s Ultra Low Emission Zone (ULEZ). The zone’s expansion was confirmed on Friday (November 25), and Elmbridge councillors had discussed the matter with a Transport for London (TfL) representative the previous evening at an overview and scrutiny meeting.

Councillors raised issues around public transport in the borough, saying it was not as good as that in greater London, and asking what could be done to improve it so people were less reliant on their cars. The ULEZ will be expanded from August 2023 to cover the area currently in the Low Emission Zone boundary. It will mean the zone, where drivers in non-compliant cars pay £12.50 per day if they enter it, will come up to the border with Surrey.

Speaking before the decision had been announced, Elmbridge Councillor Graham Woolgar (The Walton Society, Walton Central) said the question of better public transport in Elmbridge was “one of money”. He said it was unlikely the county council would find more money to improve buses in Elmbridge, and TfL would not help either because the area is outside London.

He asked Iain Killingbeck, community partnerships lead – west, for TfL: “There wouldn’t be any prospect of public transport being improved, would you agree with that?” Mr Killingbeck said he did not accept that, though TfL’s responsibility was for transport in the capital. He said getting people out of their cars, especially on shorter journeys, and promoting walking and cycling was what TfL encouraged. He added: “That’s what we do at TfL, that’s what we’re all about. So we can help to collaborate, partner and work with you, but we don’t have the responsibility for the county or for this area.”

According to the Mayor’s office, the existing ULEZ has reduced roadside pollution levels by 44 per cent in central London and 20 per cent in inner London.

Speaking after the meeting, the county council’s leader, Cllr Tim Oliver (Conservative, Weybridge) pointed to the authority’s £50million investment in electric buses and the same amount in hydrogen buses in the county. There is also an on-demand electric bus service operating in some parts of Surrey including Tandridge and Mole Valley, and due to be rolled out to other areas.

Cllr Oliver told the LDRS: “We will invest whatever we possibly can. I’m a big believer that we are never going to get people out of their cars if there isn’t a good alternative public transport system.” He said the county council had “put the message across” to the London Mayor about the impact the expansion would have on Surrey residents, including in areas such as East Molesey where drivers will be charged if they cross Hampton Court Bridge towards Bushy Park.

The county council, as well as borough and district councils, responded to a consultation that ran over the summer on the plans, highlighting issues such as scrappage schemes, health appointments and requesting to delay the expansion. Cllr Oliver said: “We’ve done everything we possibly can to say: ‘You can’t do this, it’s not fair on our residents.’”

In Thursday’s Elmbridge meeting, Long Ditton Councillor Jez Langham (Liberal Democrat) explained his ward bordered London and agreed public transport needed to be better for residents. He pointed to the success of trams in cities such as Sheffield and Manchester,  as well as in Wimbledon, though he mentioned the Croydon tram crash of 2016 in which seven people died. Cllr Langham said: “Nonetheless it is a successful line, and given the lack of tubes around, it would seem to be a very possible solution.”

Mr Killingbeck said trams were “relatively affordable” but that there wouldn’t be the option of getting a tram line in place before the August 2023 expansion. He added: “I accept, we need to strengthen public transport.”

Cllr Oliver said trams could work in more urban areas of Surrey such as Guildford or Woking, but believed the on-demand buses were better for many of the more rural parts of the county. He added: “[Trams would be] a major infrastructural investment and if the government were to put some funding behind that, then I’m quite sure we would look at it.”

The Mayor of London, Sadiq Khan, said: “Expanding the ULEZ London-wide has not been an easy decision. The easy thing for me would have been to kick the can down the road. But in the end, public health comes before political expediency. We have too often seen measures delayed around the world to tackle air pollution and the climate crisis because it’s viewed as being too hard or politically inconvenient. But there’s no time to waste when people’s lives are on the line and we are facing a climate crisis.”